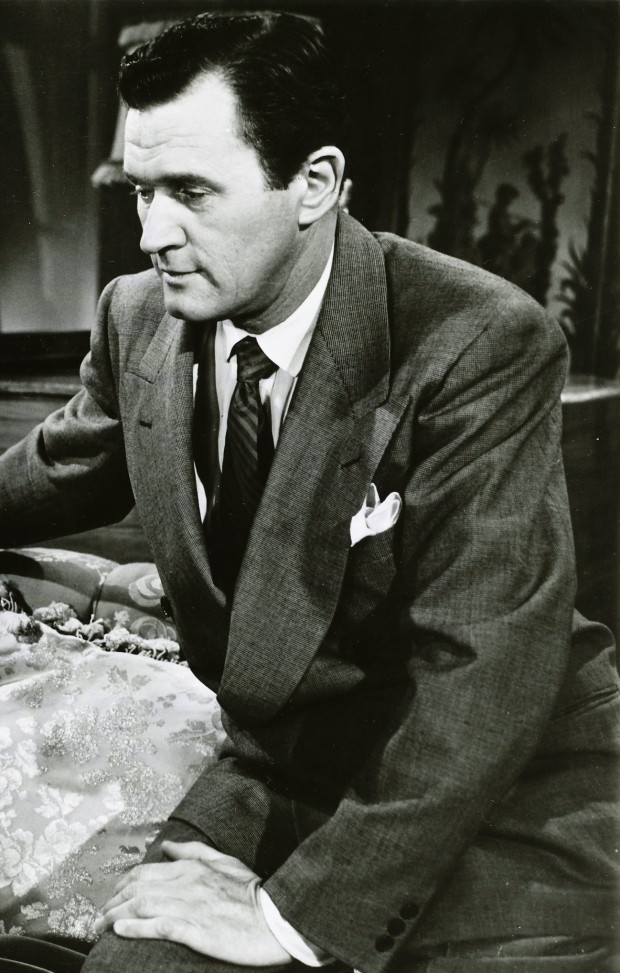 On October 16, 1944, Mutual-Don Lee West Coast listeners got their first taste of Brett Halliday’s sleuthing creation in a half-hour detective series appropriately titled Michael Shayne, Private Detective.  The program was durable enough to last until 1953, though it would go by a variety of names (The New Adventures of Michael Shayne, The Adventures of Michael Shayne) and heard in a number of venues (runs on Mutual’s full network, syndication and ABC) before the legendary P.I. closed up shop.

Author Brett Halliday would seem, at first glance, to have been one of the most prolific writers in the history of pulp fiction…and there is an explanation for this.  “Halliday” was a pseudonym for several authors, including Dennis Lynds (who wrote the Dan Fortune series under the pen name of “Michael Collins”).  The origins of Michael Shayne can be found in a 1939 novel, Dividend on Death, written by Davis Dresser (as Halliday).  Dresser went on to pen fifty Michael Shayne novels (with a few of those ghostwritten by others).  According to legend, Shayne was based on an American that Dresser had encountered during a bar fight in Tampico, Mexico when he was working as a deckhand on an oil tanker.  All in all, the sleuth known as Shayne would appear in a total of 77 books and 300 short stories…not to mention a dozen motion pictures and a smattering of comic book appearances.

The introduction of the gumshoe to the silver screen in 1940 with Michael Shayne: Private Detective also played a significant role in the construction of the radio show in 1944.  On the big screen, Shayne was played by character great Lloyd Nolan—who would grace seven B-films as the detective for 20th Century Fox; the first five of these programmers have been released to DVD (one stand-alone disc, Dressed to Kill, and the other four comprising the box set Michael Shayne Mysteries: Volume 1).  The character would later be the subject of five B-flicks cranked out by Producers Releasing Corporation (better known as PRC) between 1946 and 1947, and would star future Leave it to Beaver dad Hugh Beaumont as the hard-boiled shamus

Sources say that of all the performers to play his creation, Dresser preferred Wally Maher—the actor who took on the role of Michael Shayne when the radio series debuted on October 16, 1944 over KHJ.  With a cast that included radio veterans Cathy Lewis (as his blonde bombshell girlfriend Phyllis “Phyl” Knight) and Joe Forte (as Lieutenant Farraday), Michael Shayne, Private Detective fleshed out the investigator a great deal more than the pulp novels.  (The participation of Brett Halliday/Davis Dresser, however, was more or less limited to picking up his royalty check.)  Listening to surviving transcriptions, a listener might detect a similarity between Maher’s portrayal of Shayne and his later appearances on Let George Do It as Lieutenant Riley.  Michael Shayne also echoed the later Yours Truly, Johnny Dollar in that the detective often functioned as the narrator of his adventures, filling in details in order to lure the listening audience into the story.

This first incarnation of Shayne left the airwaves in November of 1947, but by July 1948 he was back on the air in a syndicated series entitled The New Adventures of Michael Shayne.  Actor Jeff Chandler took on the role of the P.I., who had relocated to New Orleans from his original Miami stomping grounds…and operated without the help of girlfriend Phyl or any other sidekicks.  (In the novels, Phyllis was married to Michael for a short time before being killed off in 1943’s Blood on the Black Market.)  The program, directed by William P. Rousseau, bore a slight resemblance to the Jack Webb productions Pat Novak for Hire and Johnny Madero, Pier 23—Webb even appeared in some of the episodes, along with William Conrad, Raymond Burr and Tudor Owen—and was considerably more “ramped up” than the previous Maher version.  Chandler’s Shayne would prove to have more staying power than all of the others, owing to its recorded transcription status; it was widely distributed to other countries (Canada, Jamaica, etc.) and heard over AFTRS in the late 1960s.

ABC Radio resurrected the private investigator for one last go-round in October of 1952 with The Adventures of Michael Shayne.  Donald Curtis was Shayne for a handful of broadcasts, and then the role was handed off to Robert Sterling, the future co-star of the TV sitcom Topper.  In January 1953, the network hired another radio veteran, Vinton Hayworth (later to appear on I Dream of Jeannie), to emote as Shayne every week—a job that ended on July 10, 1953 after thirty-nine episodes (twenty-five with Hayworth).  The notable development in ABC’s version was that Michael Shayne returned to his familiar Miami, Florida environs…and he had a new girlfriend in this one, one Lucy Hamilton (played by Dorothy Donahue).

There would be one more sighting of Michael Shayne before he decided to return to the publishing arena.  NBC brought the red-headed shamus to TV in the fall of 1960 in a series starring Richard Denning, formerly of My Favorite Husband and Mr. and Mrs. North.  Several of the episodes were penned by future Columbo creators William Link and Richard Levinson (who were also responsible for Mannix and Murder, She Wrote) and the program starred Patricia Donahue as Lucy (Donahue was later replaced by Margie Regan), Gary Clarke, Jerry Paris and Herb Rudley.  It would run only one season (it had fierce competition from The Twilight Zone and The Detectives with Robert Taylor); after which Michael Shayne continued on in novels, a brief comic book series and a popular monthly magazine (Michael Shayne Mystery Magazine) that began in 1956, ceasing publication in 1985.