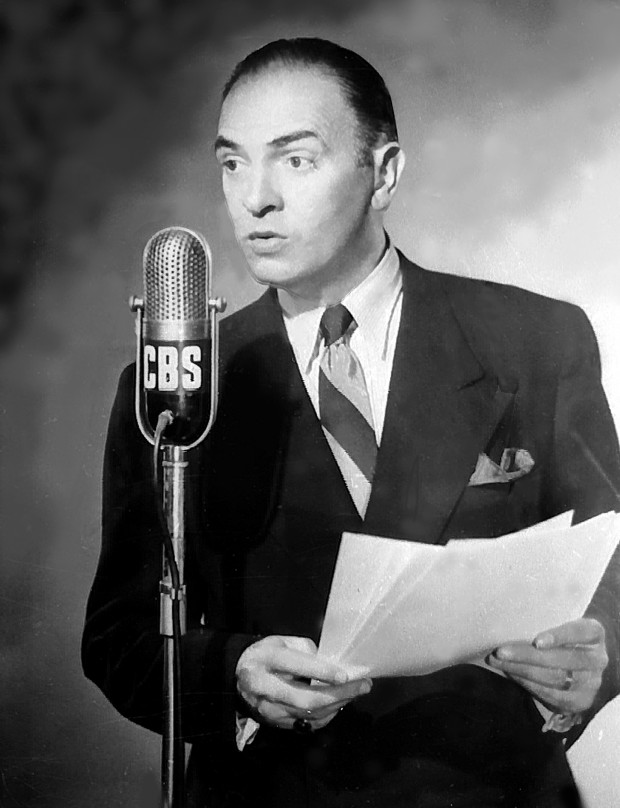 Radio historian and Radio Spirits contributor Jim Widner once asked humorously of today’s birthday celebrant “Any detective he didn’t play?” in a 2013 article of the Radio Recall newsletter. Jim is referring to actor Santos Ortega, born in New York City in 1899. Ortega was a true radio veteran who did emote on a variety of the medium’s most popular crime dramas, and in later years enjoyed a long-running gig on one of the small screen’s best remembered daytime soaps…the preparation for which began in radio as well.

Santos was born to Isabella Corbett and Rafael Ortega—Rafael was a cigar maker by trade, and that might be where his son picked up his stogie smoking habit (many of Ortega’s publicity photos feature him with cigar in hand). Educated in Manhattan, Santos briefly entertained ambitions of being a clergyman, and studied for the priesthood at the Christian Brothers Seminary in Pocantico Hills, NY for a couple years before changing his mind. No, it was the actor’s life for the young Santos; he first appeared in an “extravaganza” at the old Hippodrome Theater before eventually landing roles in such Broadway productions as What’s the Use and What Never Dies.

Radio opened up many acting opportunities for Santos, and he landed his first job in 1929 on a variety program entitled Blackstone Plantation. Ortega played “Don Rodrigo,” a Latino character…and his only explanation for getting the gig was that the casting director looked at the name of “Santos Ortega” and figured with that background he’d be perfect for the part. Despite his Latino origins (on his father’s side—his mother was Irish), Santos spoke without a trace of an accent…but he quickly learned that many acting roles would come his way if he could master a Spanish dialect, and he acted accordingly. (Apologies for the pun.) His versatility would shine through as he appeared on many popular series including Arch Oboler’s Plays, The Big Story, The Cavalcade of America, The Columbia Workshop, Inner Sanctum, and The Mysterious Traveler.

As an actor based in the Big Apple, Ortega found himself much in demand for parts on crime and mystery-based series. One of his first major jobs was playing Inspector Richard Queen, the father of the titular sleuth on The Adventures of Ellery Queen. Santos essayed that role from 1939 to 1947. The actor later got a promotion when he was cast as the legendary Bulldog Drummond on that series in 1942, and a year later began portraying Nero Wolfe in a short-lived series inspired by Rex Stout’s legendary detective. He played the legal profession’s best-known detective, Perry Mason, briefly on the Mason daytime drama, and later starred as Roger Kilgore, Public Defender for a time in 1948. Ortega inherited the role of the inscrutable Charlie Chan (from future Oscar winner Ed Begley, no less!) as the show based on Earl Derr Biggers’ Asian gumshoe wound down in 1947 and 1948, and was one of several actors to portray Commissioner Ralph Weston, the friendly nemesis of “wealthy young man about town” Lamont Cranston on The Shadow.

One of Santos Ortega’ starring detective roles is sadly lost to the ages. Santos was the titular sleuth of The Affairs of Peter Salem, a Mutual program broadcast from 1949 to 1953. By most accounts, it was a very well-written series (scripted by Louis Vittes, who wrote for the likes of The Adventures of the Saint and Mr. and Mrs. North) about a wily small-town detective…but the only remains of the series that would allow listeners to experience Santos in a lead role exist in two short excerpts discovered by radio archivists. While the Salem program was on the air, Ortega also took on the part of Hannibal Cobb, an unusual daytime detective series heard briefly between 1950 and 1951. Other crime series that featured work by Santos include 21st Precinct, Barrie Craig, Confidential Investigator, Casey, Crime Photographer, Famous Jury Trials, Gang Busters, Murder by Experts, Official Detective, This is Your FBI, and Treasury Agent.

Another benefit of New York radio acting at the time was being able to work on what we now refer to as “the soaps.” Santos Ortega was no exception; he started out in earnest on Myrt and Marge (as suitor Lee Kirby), and later gravitated to such “weepers” as The Man I Married, The O’Neills and This Day is Ours. Ortega had high-profile gigs on the likes of Our Gal Sunday (as Oliver Drexton), Portia Faces Life (Clint Morley), and Valiant Lady (Edward Curran), but he’s perhaps best remembered as Dr. Duncan Carvell on Big Sister, a role he would also play on Sister’s “spin-off,” Bright Horizon. Though radio’s popularity began to wane by the 1950s (thanks a lot, television!), Santos continued his love of the medium working on such shows as Dimension X and X-Minus One – and when Suspense and Yours Truly, Johnny Dollar migrated back to NYC from Hollywood, Santos worked on those programs as well. Ortega was also one of the enthusiastic participants on The CBS Radio Mystery Theatre, the Himan Brown-produced attempt to resurrect aural drama in the 1970s.

But because television was too big a thing to be out of, Santos Ortega succumbed to the realities of show business, eventually landing the small screen role that he would play until his death in 1976. He inherited the part of William “Grandpa” Hughes from Will Lee (Lee would find his own TV fame as “Mr. Hooper” on Sesame Street) on the second telecast of As the World Turns. Apart from a couple of feature films (The Family Secret, Crowded Paradise) ATWT would be Ortega’s bread-and-butter for the remainder of his career. (Santos attributed his seamless transition to television to his stage experience, and the fact that he knew many of the casting directors in the business.)

Santos Ortega was one of the hardest working actors in radio; I’ve just barely managed to scratch the surface of the man’s extensive resume.