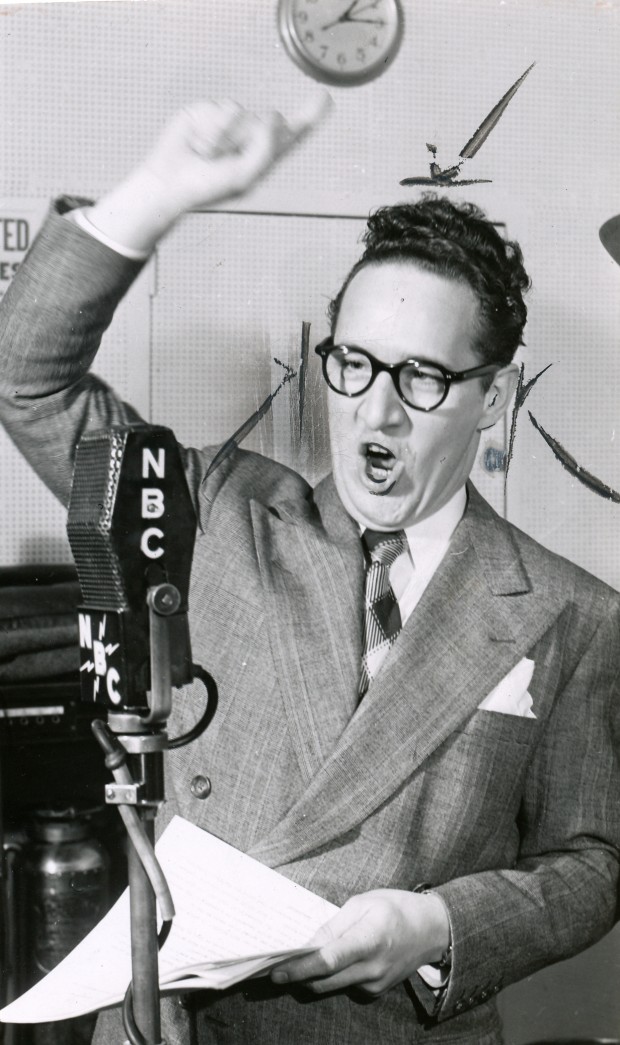 The man born in Boston, Massachusetts on September 5th in 1910 would soon make a big name for himself as the long-winded stooge for a well-known radio comedian who also had roots in the Boston-Cambridge area. Kenneth Frederick Fay Howard would later change his handle to Kenny Delmar, and though he eked out a successful career as a radio actor and announcer on many shows, we remember him best as Senator Beauregard Claghorn, Southern politician and the first person to answer the door when Fred Allen took a stroll down “Allen’s Alley” in the mid-1940s. “Somebody, I say, somebody knocked!” Claghorn would bellow, signaling to the listening audience that while Allen may have been the star of The Fred Allen Show, he’d be lucky to get in a word edgewise as long as the bellicose Claghorn was filibustering.

Delmar may have been a Beantown native, but his mother Evelyn put down stakes in New York City while Kenny was still in infancy. She made a living in vaudeville with her sister as The Delmar Sisters, and young Kenny developed a flair for the buskin around the age of eight. You can spot him in the 1921 film Orphans of the Storm—directed by D.W. Griffith—as the younger version of Joseph Schildkraut’s character. However, he had difficulty finding more movie work after that auspicious debut. He continued his career on stage until the Depression, when he briefly worked in his stepfather’s business, and would later go on to run a dancing school—marrying one of the ballet instructors, Alice Cochran.

Delmar would eventually gravitate toward a career in radio in 1936, possessing a fine, strong voice that served him well as an announcer on the likes of The March of Time and Your Hit Parade. It’s likely that working on Time is where he made the acquaintance of wunderkind Orson Welles, who used Kenny’s considerable talents in many of his Mercury Theatre on the Air broadcasts. Delmar would play The Secretary of the Interior on the legendary October 30, 1938 “War of the Worlds” broadcast…but because he used his “FDR voice” (at Orson’s request) many listeners were convinced it really was the President they were hearing. Kenny also played Commissioner Weston on The Shadow in both the Welles and Bill Johnstone years. He was also heard on such programs as The Columbia Workshop, The Cavalcade of America…and The Jack Benny Program, as one of the commercial spokesmen for Lucky Strike.

Kenny’s famous Senator Claghorn character was inspired, as he related the tale, by a Texas cattle rancher who had picked Delmar up one day as Kenny was hitchhiking his way to California. The garrulous cowman like to boast about his spread (“Son, I own five hundred head of cattle—five hundred, that is.”) and memorably punctuated his habit of telling old groaners with “That’s a joke, son—I say, that’s a joke!” Realizing that this encounter was a dream come true for an actor, Delmar filed the man’s speech patterns and mannerisms in his memory bank and would call upon them whenever he played a character he tabbed “Dynamite Gus” at parties. On The Alan Young Show, where Kenny performed as both announcer and one of the regulars, he borrowed the “Gus” voice for a character named Councilman Cartenbranch.

Minerva Pious, an actress who played many characters on Fred Allen’s program—most notably Pansy Nussbaum, the Jewish housewife who lived in Allen’s Alley—suggested to her boss that Delmar’s windbag politician might be just the ideal replacement for a similar target of ridicule on the program known as Senator Bloat. The actor who played that role, Jack Smart, had left Allen’s program at the end of the 1943-44 season for Hollywood. So when Fred returned to the airwaves in the fall of 1945, “Allen’s Alley” had a new resident in Claghorn—a representation of the Old South that folks prayed would never rise again. The Senator would only drink from Dixie Cups and refused to drive through the Lincoln Tunnel; his favorite actress was Ann Sothern and he never—ever—listened to Mr. and Mrs. North. After just one month on the show, Claghorn became a sensation who’d inspire novelties like T-shirts and compasses (that only pointed South) and songs like “That’s a Joke, Son” and “I Love You, That Is.”

The Claghorn character enabled Delmar to briefly resurrect his movie career, which had been dormant since 1921. He played the verbose politico in It’s a Joke, Son!—a 1947 film produced by the British-based Eagle-Lion studios. The mildly amusing vehicle that co-starred Una Merkel (Adeline Fairchild on The Great Gildersleeve) and June Lockhart as, respectively, Beau’s wife and daughter. It performed well at the box office, but didn’t usher in any future film work for its star (Delmar’s only other notable entry on his movie resume is 1962’s Strangers in the City).

In addition to “tooting the Claghorn” every week, Kenny Delmar served as Allen’s announcer and foil on the program, and would play secondary characters when needed. Kenny was Ginny Simms’ announcer for a brief stint, and performed on other shows with the likes of Bob Hope, Danny Kaye, Eddie Cantor and Henry Morgan. When the Allen show rang down the curtain in 1949, Kenny could still be heard on such series as The Magnificent Montague, The Theatre Guild on the Air and The Adventures of the Abbotts—and he made a big splash on Broadway as Hominy Smith in the hit musical Texas, Li’l Darlin’. Delmar also made inroads into television, guest starring on the likes of The United States Steel Hour and Kraft Theatre, but was more comfortable voicing a number of characters on cartoon shows. On King Leonardo and His Short Subjects he was the canine detective known as The Hunter (or as he pronounced it, “The Hun-tah!”); on Tennessee Tuxedo and His Tales he played the titular ex-military man on the segment The World of Commander McBragg (“Quite.”). Delmar also worked occasionally on Underdog (he was Colonel Kit Coyote of Go-Go Gophers fame) and narrated the adventures of The Beagles, a rock ‘n’ roll band of canines loosely based on some popular British music group.

Kenny Delmar spent his remaining years eagerly reminiscing about Radio’s Golden Age on venues like Same Time, Same Station—and finally left this world for a better one on July 14, 1984 at the age of 73.