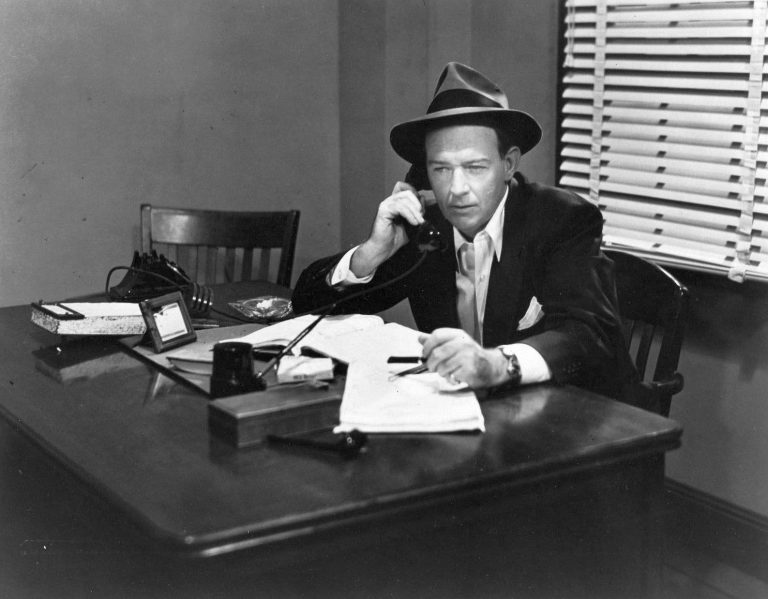 In his essential reference encyclopedia of old-time radio, On the Air, author John Dunning notes that actor William Gargan’s presence on the detective drama Barrie Craig, Confidential Investigator “was an interesting bit of typecasting.” “As a young man he had worked in a real detective office,” Dunning continues, “and had once confessed amusement at the blunders of radio detectives.” John damns the show that premiered over NBC on October 3rd in 1951 with faint praise, noting that it “seldom rose above B-grade detective fare.” This is not necessarily a bad thing, speaking as someone who’s watched and listened to more “B-grade detective fare” than Carter has little liver pills. Here’s the straight dope: with Gargan on board, Barrie Craig was always worth a listen.

Though William Gargan enjoyed a long motion picture career—which included an Academy Award nomination as Best Supporting Actor for his memorable turn in 1940s They Knew What They Wanted—a good many of the movies on his resume were known in the industry as “second features” (B-movies), and crime mellerdrammers at that. (For example, Bill played Ellery Queen in the final three programmers in Columbia’s franchise…and might have appeared in more had he been under contract to the studio.) On radio, Gargan was also a veteran in the crime business, starring on such shows as Murder Will Out and I Deal in Crime—with his best-known turn before a microphone as the titular gumshoe on Martin Kane, Private Eye. Bill simultaneously played Kane in the TV version, stepping down only when he became disenchanted with the show’s scripts. (According to Gargan, they were “a vehicle for the meat parade.”)

That brings us to the fall of 1951, with William Gargan set to star in a radio mystery series entitled Barrie Crane, Confidential Investigator. Yes, that was the character’s original name…but Bill’s old Martin Kane bosses objected, arguing that “Crane” sounded too much like “Kane.” So the protagonist became “Craig,” and for most of the show’s four-year run, Gargan delivered the goods…even when the plots were not the textbook definition of “inspired.” When the show’s announcer (future Jeopardy!and Saturday Night Live announcer Don Pardo during the program’s New York period) enthused that listeners would soon hear “another transcribed drama of mystery and adventure with America’s number one detective,” it’s possible that there was some eye-rolling in a few quarters. (Radio Mirror noted in 1953 that Barrie Craig was “a sucker for a $100 retainer.”)

The strengths of Barrie Craig were with Gargan, of course, but also a dedicated stock company of New York acting talent that included Ralph Bell (as Lt. Travis Rogers, Barrie’s contact on the force), Parker Fennelly (as Jake the elevator operator), Elspeth Eric, Santos Ortega, Arnold Moss, and Amzie Strickland. Himan Brown, the man who frightened radio listeners with the mere sound of a door in need of oil for its hinges (Inner Sanctum Mysteries), was the director for the series. Scripts were contributed by veterans including Ernest Kinoy, John Roeburt, and Louis Vittes. Vittes had a gift for eccentric characters and offbeat dialogue, a talent he had previously displayed on the likes of Mr. and Mrs. North and The Adventures of the Thin Man (another Hi Brown show).

The production of Barrie Craig, Confidential Investigator migrated to the West Coast after a three-year stint on NBC, allowing members of the “Radio Row” congregation—Betty Lou Gerson, Jack Moyles, Barney Phillips, Virginia Gregg, Vivi Janiss, etc.—to support William Gargan as Barry. (Parley Baer even does his best “Parker-Fennelly-as-Jake” impression in an August 31, 1954 episode entitled “Hay is for Homicide.”) In the surviving transcription for “Ghosts Don’t Die in Bed” (09/07/54), you’ll hear Gargan’s pre-recorded remarks for next week’s show (“The Corpse Who Couldn’t Swim”) before announcer John Laing drops this little bombshell: “We regret that with the program you have just heard, we conclude the present Barrie Craig series…we hope you have enjoyed them, and we look forward to bringing them to you again sometime in the not too distant future.”

Laing wasn’t wrong about “the not too distant future,” by the way; “Corpse” would be the focus of Barrie Craig, Confidential Investigator when the show resumed on October 3rd. With his June 30, 1955 broadcast (“The Man Who Didn’t Get Them Wholesale”), Barrie Craig filed for unemployment …though the actor who portrayed him, William Gargan, would reprise his role as the original Martin Kane in a syndicated TV series in 1957 (The New Adventures of Martin Kane) before he lost his voice box to throat cancer.