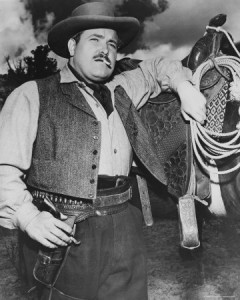 “The first man they look for, and the last they want to meet…”

John William Cahn, Jr. was born on September 27th, 1920 in Lexington, Kentucky. He’s better known by his stage name, William Conrad. He remains a favorite among old-time radio fans for his incredible voice, a commanding rumble which would no doubt rattle the roof of any studio he happened to be in had he chosen to unleash it at full force. Bill once estimated that he played 7,500 parts during his distinguished radio career—with a wonderful sense of self-deprecation, he often joked that he was “The Man of a Thousand Voice.”

As a youngster, I knew Conrad from the television crime drama Cannon, which was a favorite of my mother’s. The title of the show was the surname of its rotund hero (first name: Frank), an ex-cop turned private investigator who obviously had not missed too many meals in his lifetime. The portly Cannon was mostly a gimmick to attract jaded television viewers; most of the boob tube detectives were that way—young (The Mod Squad), blind (Longstreet), wheelchair-bound (Ironside), elderly (Barnaby Jones)…you get the idea.

But during my brief stint at Marshall University in the early 1980s, I had the good fortune to check out some old-time radio programs from the college library; one set featured a number of western shows, with the emphasis on the greatest radio oater of them all: Gunsmoke. That’s when heard William Conrad in his signature radio role: Matt Dillon, U.S. marshal from “around Dodge City and into territory on west.” I had a passing awareness that Gunsmoke had started on radio, and the TV series was a longtime favorite in the Shreve household…but, nothing prepared me for the mesmerizing power of Conrad in the radio version. It’s still the definitive way to experience Gunsmoke. Don’t get me wrong, I love the TV version, but it just can’t match up against the original. I’ve always admired what Gunsmoke sound man Bill James once said about the difference between the two versions: “Even after all these years I have never been able to watch even one episode of the TV version. To me, those performers are nothing but imposters.”

Oddly enough, Conrad was not the first actor called on to audition for the role of Matt Dillon. Writer John Meston was solidly in his corner, but both producer-director Norm Macdonnell and CBS Radio thought the actor was a little overexposed. It’s not hard to suss out why. After majoring in drama and literature at Fullerton College (near Los Angeles), Bill had landed a job at KMPC as an announcer, writer and director—he both acted in and produced a series called The Hermit’s Cave, a West Coast version of a popular syndicated horror anthology with roots at WJR in Detroit. Called up for service during World War II, Conrad was a producer-director with the Armed Forces Radio Service in addition to being a fighter pilot. Upon his return, he made the rounds on many classic radio series: The Adventures of Sam Spade, Favorite Story, The Lux Radio Theatre, The Man Called X, Night Beat, On Stage, Pete Kelly’s Blues, Romance, Suspense, The Voyage of the Scarlet Queen and The Whistler—and that’s barely scratching the surface. Bill was also well known as one of two rotating announcers (the other being Paul Frees) on the 1947-54 adventure anthology Escape. If you turned on a radio back then and didn’t hear William Conrad…chances are it needed to be taken in for repairs.

After auditioning with just a few read lines, Conrad was tabbed to play Gunsmoke’s Dillon. Writer Meston would later observe that the Dillon character—a lonely, isolated man—was magnificently fleshed out by the actor: “Much of Matt Dillon’s character grew out of Bill Conrad.” And yet the man who defined Matt Dillon on radio was completely shut out of the running when discussions turned to bringing the radio hit to TV. The actor’s size worked against him—the network was convinced that the public wouldn’t accept Conrad as the U.S. marshal, despite history suggesting that most lawmen were, indeed, built like Bill. Conrad and the other radio performers—Parley Baer, Georgia Ellis and Howard McNear—were given token auditions, but the network had other plans for the casting. The integrity of the TV version was only sustained by the fact that they at least had the good sense to keep John Meston on as head of the writing staff.

William Conrad might have been denied the opportunity to play Matt Dillon—something that rankled the actor for years afterward and strained his relations with CBS before he got the Cannon gig—however, the silver screen was an entirely different ballgame. The movies allowed a man of Bill’s girth to play first-rate (you’ll pardon the pun) heavies. His first credited role, as one of the two titular hit men (Charles McGraw being the other) in 1946’s The Killers, is also one of his most memorable—at least around Rancho Yesteryear. (Conrad’s line “They eat the dinner…they all come here and eat the big dinner” is predictably repeated around Thanksgiving.) Bill was perfect for film noir: he had roles in Body and Soul (1947), Sorry, Wrong Number (1948), Tension (1949), Cry Danger (1951), The Racket (1951), The Long Wait (1954) and 5 Against the House (1955). There are two Conrad movies worth noting for radio fans. The first is The Naked Jungle (1954), based on the Carl Stephenson story Leinengen vs. the Ants, so memorably produced on both Escape and Suspense (sadly, Bill doesn’t get to play the title role—he’s the Commissioner in the movie version). And, for those curious about what Conrad would have been like as Matt Dillon on screen, I recommend The Ride Back (1957), which features Bill as a lawman assigned to escort prisoner Anthony Quinn back for trial (with a screenplay penned by radio veteran Antony Ellis).

Bill Conrad developed an interest working on the other side of the camera and, as a director-producer supervised episodes of such series as Tombstone Territory, Bat Masterson, Naked City and Have Gun – Will Travel. He also exercised his auteur ambitions on three films released by Warner Brothers in 1965 (and, like Alfred Hitchcock, had cameos in them): Two on a Guillotine, My Blood Runs Cold and Brainstorm. Conrad, however, was a performer at heart…and his magnificent voice was perfect for narrating television shows. His best known voice over work was for Rocky and His Friends (later The Bullwinkle Show) and The Fugitive, but he could also be heard on This Man Dawson, The Invaders and Buck Rogers in the 25th Century. His five-year-run as Frank Cannon on the detective TV series proved quite successful (with the first three seasons available on DVD), though an attempt to play Nero Wolfe (the corpulent sleuthing creation of Rex Stout) lasted only a season in 1981. Conrad rebounded six years later as prosecutor J.L. (Jason Lochinvar) McCabe, the “Fatman” of Jake and the Fatman, a CBS legal drama that aired from 1987 to 1992 (its first two seasons are also available on disc). Conrad passed away of congestive heart failure on February 11, 1994.