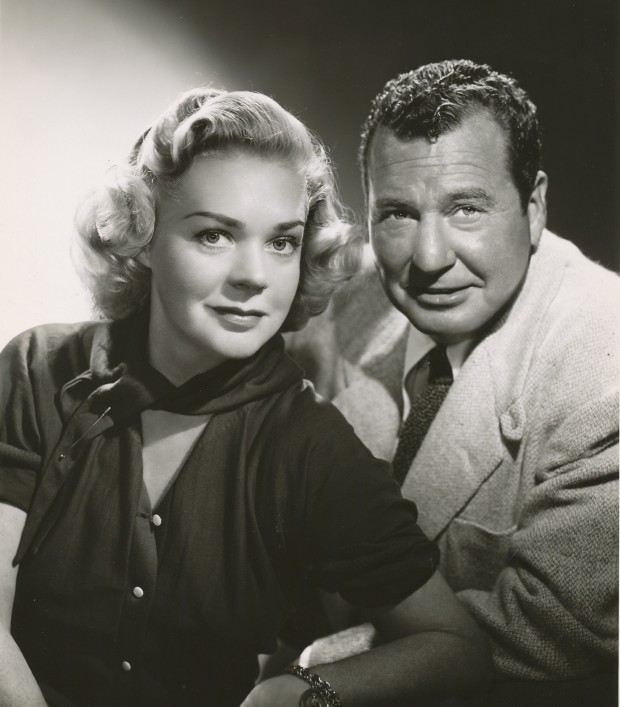 Comedy to the Extreme: The Radio Legacy of Phil and Alice and Julius and Frankie

By the end of the Second World War, subtle radio comedy was becoming as hard to find as an unfurnished apartment, a new pair of nylons, or a porterhouse steak. The war years had brought with them a bold, brassy style of humor that asked no questions and took no prisoners — with a machine-gun tempo and a Sherman Tank aggressiveness, the radio comics of the early postwar era beat their listeners over the ears with jokes and gags and made them like it.

The comedy characters who emerged from this era were every bit as outrageous as the material itself, wild, exaggerated caricatures of every possible human frailty — the cartoonish, vaudevillian denizens of Allen’s Alley, the flyspecked habitués of Duffy’s Tavern, the screaming pop-eyed stooges who surrounded Bob Hope and Eddie Cantor and Abbott and Costello. There was nothing realistic or nuanced about these characters — they had no grounding in the real world. They were caricatures, pure and simple, and the audiences of the time understood them as such, existing only for the sake of laughs. And perhaps no program of the era captured this zeitgeist of unrestrained lunacy quite so well as The Phil Harris-Alice Faye Show.

By the time bandleader Phil Harris and his recently-retired movie star wife Alice Faye converted the long-running Sunday night Fitch Bandwagon program from a musical variety format to a situation comedy, Phil had been playing a zany comic caricature for nearly a decade as a member of Jack Benny’s troupe. Here was the conceited, hard-drinking curly-haired pretty-boy entertainer in all his glory, traits painted in such broad strokes that audiences genuinely believed Phil Harris to be an irredeemable reprobate of the first water — except he never touched anything so pedestrian as water.

But adapting this caricature to a situation comedy format posed a problem. Harris and Faye proposed to do a family comedy, presenting themselves as a real-life married couple, with two young children. And with kids in the picture, Harris’s zany booze-fueled antics suddenly didn’t seem so funny. Writers Joe Connelly and Bob Mosher solved the problem by turning Phil into the straight man for an even more outrageous caricature — the shiftless, scheming, childishly-irresponsible left-handed guitar player Frankie Remley.

Remley was a real man, a real member of the Harris orchestra and a close personal friend of Jack Benny, who began dropping random Remley gags into his program in the late 1930’s. These jokes, accumulating over several years, sketched a basic outline which Connelly and Mosher used as the foundation for a fully-developed character, brought to vivid life by the brilliant Elliot Lewis. As developed by Connelly and Mosher, and as expanded upon by the subsequent writing team of Ray Singer and Dick Chevillait, Frankie Remley wasn’t just a lazy, shiftless, no-account bum — he was the laziest, most shiftless, most no-account bum who ever lived. Lewis’s full-tilt performance in the role perfectly captured the characterization in the scripts — bringing Remley to life as a man who ricocheted from one mishap to another, all the while blissfully oblivious to the chaos he left in his wake. And next to a creature of such barbarous habits, even Phil Harris seemed just a bit more responsible, and thus more believable and acceptable as a parent of young children. It was a master stroke of character development that perfectly fit the mood of the times, and which created some of radio’s most hilarious moments. 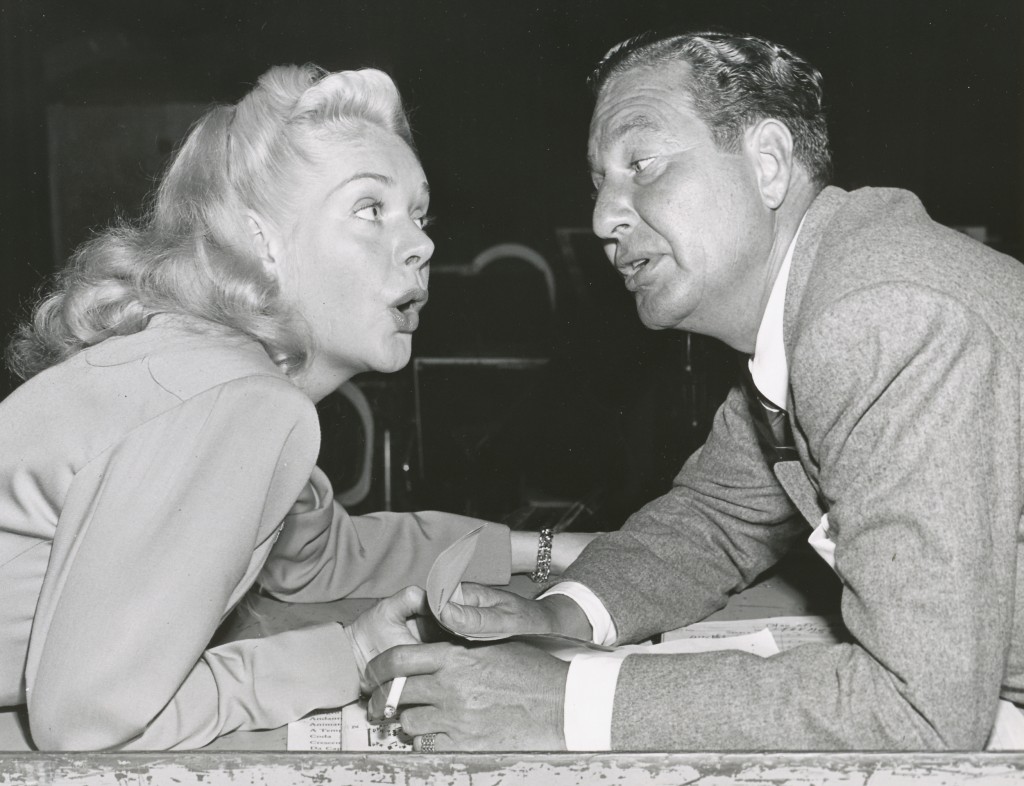 The Phil-Frankie pairing made up the comic heart of the Harris-Faye program, but Alice Faye herself made up a strong counterbalance to their antics. If, to cite another Connelly-Mosher script partnership, Phil and Frankie were comparable to Andy and the Kingfish, Alice Faye was their Amos — a sober-minded soul who stood for common sense and reason. But she was no doormat — she possessed a sharp tongue, which she wielded with precision, knocking the wind out of Phil’s pretensions and keeping Frankie in his place.

The supporting characters who populated the Harris-Faye program were just as broadly drawn as the central figures. Three prominent adversaries stood in the path of whatever mayhem Phil and Frankie might be scheming up in any given week — and each of those characters was exaggerated to the extreme. The most prominent of these characters, the malevolent grocery boy Julius Abruzzio, was a sassy, vest-pocket delinquent who viciously and methodically tormented Phil and Frankie for the sheer joy it brought to his otherwise tedious life. He needed no other motive, he displayed no other traits. Actor Walter Tetley had made an entire career out of playing smart-mouthed kids, but with Julius he raised the stereotype to its ultimate degree. In keeping with the usual Harris-Faye Show pattern, he wasn’t just another brat, he was The Worst Brat Who Ever Lived, and audiences invariably screamed with delight as he made his weekly entrance.

Continuing along those same lines, the second great adversary on the program was Willie, Alice’s brother, who served as her business manager and general factotum — and who never missed an opportunity to look down his nose at Phil and Frankie and their nonsense of the week. Portrayed by Broadway character actor Robert North, and later by film comedian John Hubbard, as a mincing, officious Franklin Pangbornesque flibbertigibbet, Willie was the ultimate caricature of the irritating, meddling, live-in brother-in-law.

And rounding out the adversarial cast was Mr. Scott, the representative of the Harris-Faye sponsor. It didn’t matter whether he worked for Rexall or RCA Victor, Mr. Scott was a stuffy, humorless, stiff-necked authority figure whose black-and-white worldview was bound to bring him into constant and exhausting conflict with such free souls as Phil and Frankie — a conflict which had to result in a stack-blowing of monumental proportions. And who better to take such a caricature to the extreme than the man who built an entire career on playing stuffy, humorless, stiff-necked authority figures — the inimitable Gale Gordon, whose matchless slow-burn temper was bound to explode by the end of every episode.

These were the basic ingredients, a volatile blend of exaggerated personality types destined for comic conflict, and each week they were plunged into plotlines every bit as outrageous. What happens when Frankie tries to beat the meat shortage by buying his own cow? How about Phil and Frankie deciding to develop new drugs for Rexall with a kitchen-table chemistry set? Or when Frankie becomes the manager of a hard-boiled lady wrestler? Or when Phil replaces the blower motor on the furnace with a war-surplus wind tunnel? Or when Phil and Frankie try to cook a fifty-four pound turkey for Thanksgiving? What if Phil and Frankie buy an old trunk with a dead body in it? No subtlety here, no heartwarming special moments, just raw, untamed, wide-open comedy — just what postwar America wanted most. When Singer and Chevillait took over the program in 1948, it reached its zenith, with each episode more unpredictable than the one before. The writers were given free rein, with minimal editorial control by Harris and Faye, who were perfectly willing to engage in whatever nonsense they cooked up each week.

The sort of comedy the Harris-Faye Show specialized in couldn’t last. It was too wild, too undisciplined to sustain itself over the long term, especially with the shift in the national mood during the early 1950’s. Zaniness faded from favor, and warm, lovable families were back in vogue. Security and responsibility and gentle chuckles were coming back in style — and a world like that had no place for Phil and Frankie, their friends, and their enemies. By 1954, the series was on its last legs, and it never had a chance of moving to television.

But the Harris-Faye Show lives on today, a consistent favorite among old-time-radio enthusiasts. While many radio comedy programs seem corny or dated to present-day listeners, the Harris-Faye style of comedy stands out as startlingly modern — sardonic, self-referential, and self-aware, as much a sharp parody of the conventions of family comedy as it is an actual family comedy. What made it the perfect expression of its own era makes it equally appealing to audiences six decades later.