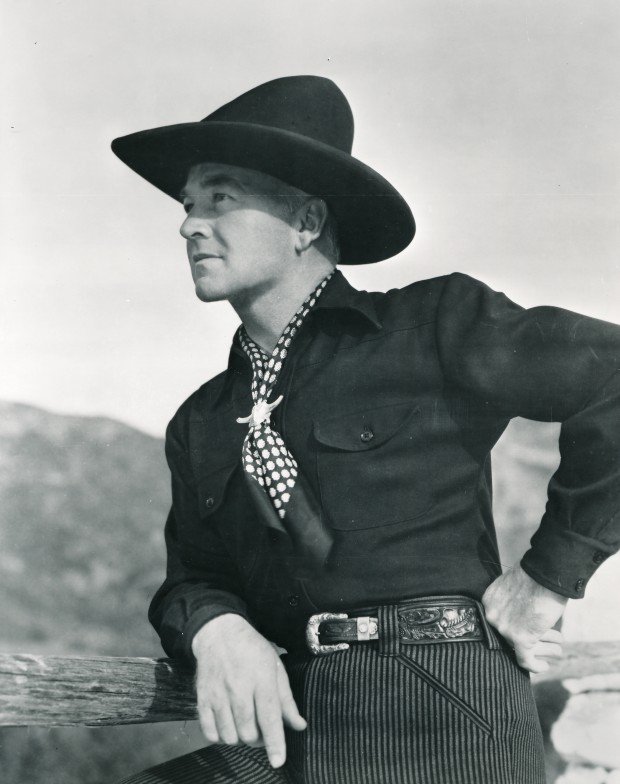 The August 11, 1941 broadcast of CBS’ Forecast marked the first time the character of Hopalong Cassidy was offered up to radio audiences as a potential series, much in the same manner as fellow B-Western cowboy Gene Autry did with his Melody Ranch in January of 1940. Since the Forecast presentation did not feature the actor who’d been playing Hoppy on the silver screen since 1935—William Boyd—that might have been a factor in why a Hopalong Cassidy program wasn’t spun-off from the summer anthology show in the same manner as Suspense and Duffy’s Tavern. Hopalong Cassidy would have to wait until 1949 before it was launched as a weekly series; it had its network premiere over Mutual Radio in 1950.

William “Bill” Boyd was born in Hendrysburg, OH in 1895 and moved to Tulsa at the age of seven. He lost both of his parents while in his teens, and after a series of jobs that included surveying and working in the oil fields, Boyd arrived in Hollywood in 1918 with ambitions of being an actor. After appearing in small roles and bit parts in the likes of Why Change Your Wife? (1920), The Affairs of Anatol (1921) and Adam’s Rib (1923), Bill ingratiated himself with famed film director Cecil B. DeMille—who cast him as the leading man in The Volga Boatman (1926) and The Yankee Clipper (1927), as well as substantial roles in The Road to Yesterday (1925) and The King of Kings (1927). Sadly, with the revolution of talking pictures, Boyd found himself without a contract and steadily going broke.

What really threatened to put the kibosh on Bill Boyd’s acting career was a newspaper story about a similarly-named actor, William “Stage” Boyd, in which Bill’s photo was mistakenly inserted into an article that detailed “Stage’s” arrest on gambling, liquor and morals charges. It was eventually corrected, but a lot of damage had already been done. Things started to look up for Bill in 1934, however; producer Harry Sherman had negotiated the rights to make films featuring Hopalong Cassidy, a character created by author Clarence Mulford in several popular short stories. Bill was originally cast as the bad guy in what would become Hop-a-Long Cassidy (1935), the first of fifty-four films produced by Sherman and distributed by Paramount and United Artists until 1944. When those came to an end, Boyd himself produced an additional twelve Hoppy features through his own company from 1946 to 1948.

Mulford’s cowpoke earned his name “Hop-a-Long” because he walked with a limp (a souvenir of a bullet wound); he was also a whiskey-drinkin’, tobacco-chewin’, ornery cuss. Bill revamped Cassidy into a paragon of virtue: he abstained from liquor and tobacco, didn’t swear (he spoke with flawless grammar) and rarely enjoyed the company of women. (My personal opinion is that this is why Hoppy always wore black.) He became a Saturday matinee hero to millions of young moviegoers, and guest-starred as Hoppy alongside radio favorites such as Bing Crosby, Edgar Bergen and Dean Martin & Jerry Lewis.

At some point in his career, Bill Boyd realized that playing Hopalong Cassidy was not only the best thing to happen to him as an actor…it was going to be his legacy. So in 1948, he made two shrewd business decisions that to some might have seemed like risky rolls of the dice. The first was to acquire the rights to all of his Hopalong Cassidy films, even if he had to sell his ranch in order to do so (which he did). Boyd was prescient enough to see that with the advent of television, radio’s new competitor was going to need a lot of product to fill broadcast hours. His instincts were right-on-the-money; after edited versions of the old movies appeared on New York television in 1948, new ones were produced to supplement them, and the films soon acquired a berth on NBC-TV’s schedule starting June 24, 1949.

Boyd wasn’t ready to abandon radio just yet, however. He teamed up with Walter and Shirley White, a couple who responded to the demand for syndicated programming (like Ziv and Mayfair) by founding a shoestring production operation entitled Commodore Productions. As Hoppy, Bill became Commodore’s first star; it was slow-going at first (the transcribed series started out with only a handful of shows in the can—when those were sold to individual stations, the profits were used to make more) but it paid off handsomely when Mutual scheduled the program for a nationwide audience in January of 1950, sponsored by General Foods. Hopalong Cassidy then moved to CBS in September of that year, and stayed on for a two-year stint, ending on December 27, 1952 with a special Christmas-themed episode (“The Santa Claus Rustlers”).

Joining Boyd in this new radio venture was veteran film comedian Andy Clyde, who reprised his movie role as Hoppy’s sidekick, California Carlson, in the series. Clyde appeared in the first twenty-six transcribed episodes, with Joe DuVal taking over for a brief period until Andy rejoined the program. A total of 104 episodes were produced, directed by Walter White and with musical supervision by Albert Glaser…who also composed the show’s main theme.

Bill Boyd hung up his hat and spurs in 1953 and retired to Palm Springs (his last film appearance was fitting a cameo as Hoppy in his old boss Cecil B. DeMIlle’s The Greatest Show on Earth); the Whites would solider on with Commodore Productions, initiating such series as The Clyde Beatty Show and Tarzan, Lord of the Jungle.