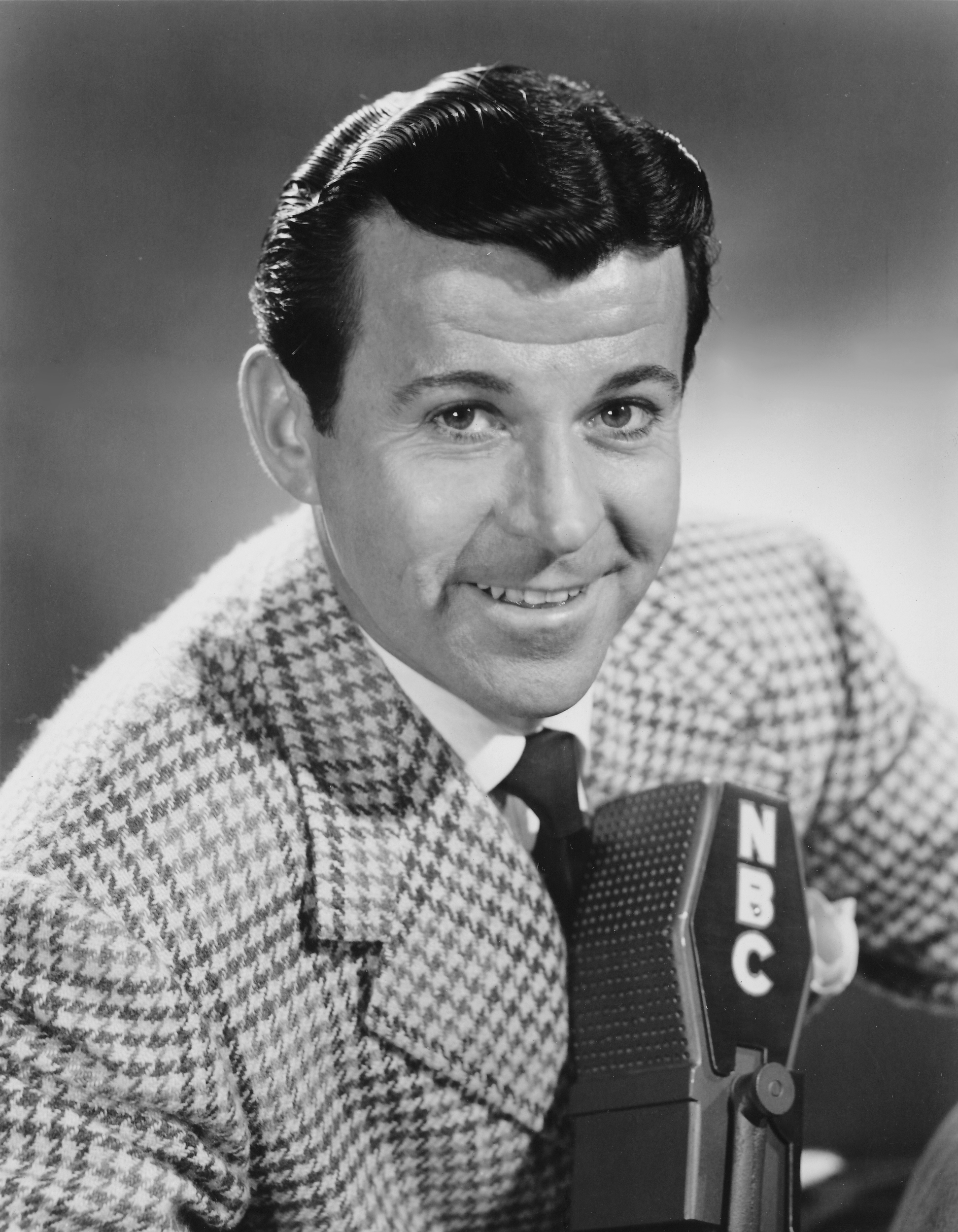 Yes, Please? The Days In the Life of Dennis Day

Part of what made The Jack Benny Program memorable was the endearing presence of Jack’s “gang.” This assembly of humorous characters were the perfect fodder for Benny’s distinctive style of comedy. While Jack wasn’t the first comedian to pursue the “gang” idea — Eddie Cantor beat him to that punch by a couple of years — he was the first to give his supporting cast juicy comic business of their own, as opposed to using them as simply stooges for the star. And for thirty years, one of the most distinctive, most talented, and most underrated members of this supporting cast was Dennis Day.

The role of the “boy singer” on Benny’s program fell into place very early on in the show’s run — with straightforward radio tenors like James Melton and Frank Parker pioneering the role in the mid-1930s. But, it wasn’t until Kenny Baker stepped into the cast in late 1935 that the essential pattern was cast — the young tenor as a naive foil for Benny’s pretended worldliness. Baker established the basic characterization, but it was Dennis Day who nailed it down for all time.

Owen Patrick Eugene McNulty wasn’t quite as young, and nowhere near as naïve, as he seemed on the air. However, he was just beginning his professional show business career when he joined the Benny program in 1939. As Irish as his name, the young performer had parlayed a college interest in glee-club singing into stage aspirations shortly after his graduation. Although the heyday of the crooning Irish tenor had reached its apotheosis in the 1910s with the popularity of John McCormack, the continuing success of Parker, Morton Downey, and other performers in the style on radio during the 1930s demonstrated that there was plenty of room for another.

Kenny Baker left the Benny troupe in 1939, having grown tired of the simpleton role and fearing its long-term impact on his career as a serious singer. Jack spent that summer searching for a replacement — a tenor, preferably young, who could fill the same comic spot in the cast as Baker had…but who could avoid seeming a slavish imitation. Gene McNulty had done a bit of broadcasting the previous summer, singing on a local New York program with Larry Clinton’s orchestra. Following his graduation from Manhattan College in June of 1939, he even decided to try his luck under a new professional name, “Dennis Day.” Hearing about Baker’s departure from the Benny program, he submitted a photo and an audition record — which caught the attention of Mary Livingstone, who convinced Jack to give the boy a chance. When Benny summoned the young singer into the audition room, legend has it that Day cracked up the comic with a wide-eyed, piping “Yes, please?”

Whether that legend is true or not, Dennis’s voice and manner impressed the comedian enough to earn him a trial shot on the program. That trial run turned into a three-decade engagement as Dennis took the character into a delightful surrealism far removed from Kenny Baker’s goofy-twit interpretation. Dennis became Gracie Allen in pants, with his own logically-illogical view of the world, of life, and of Mr. Benny himself. Day played the character as being of indeterminate-yet-adolescent age — old enough to be interested in women, but young enough to be terrified of them. His youthful voice and appearance let the joke continue for the rest of his career, even as, in real life, the performer married and raised a large family. The character of Dennis’ oppressive mother, played by Verna Felton, found her way into the cast as well, but never became a permanent figure — perhaps because Dennis was the errant child of the Benny radio family itself.  He wasn’t quite a “Baby Snooks” to Jack’s “Daddy,” but there was still a trace of willful mischief in the way in which he spun out his comic lines…to the increasing frustration of “Mr. Benny.”

Another key part of Dennis Day’s comic success on the Benny show was his astonishing versatility. Not only was he an outstanding vocalist (handling both the traditional Irish-tenor repertoire and the latest hits from Broadway and the movies with equal zest), he soon emerged as one of radio’s best vocal mimics, mastering a wide range of impressions of other comic performers. He could, at will, shift into a dead-on impersonation of Bob Hope sidekick Jerry Colonna that lacked only the moustache, or an elegant simulation of the suave Ronald Colman that captured every bit of Colman’s savoir-faire and pretended disdain for Benny. Perhaps his best sustained impression was his portrayal of “Titus Day,” an uncanny simulation of Parker Fennelly’s Titus Moody characterization on a Benny “tribute” to Allen’s Alley. In each of these roles, Dennis displayed a sound ear for vocal duplication, and a strong understanding of what made each of these characterizations work. Unlike any other of Benny’s vocalists, Dennis Day was, and enjoyed being, a polished, gifted comedian.

Military service briefly interrupted his performing career in 1944 when he took a commission as a lieutenant in the U. S. Navy. Singer Larry Stevens filled his role on the Benny program during his absence, but made no attempt to take over his characterization. In his five years with the program Dennis had made the role forever his own.

Day’s skill as a comic was such that, like showmate Phil Harris, he received his own program in 1946. In A Day in the Life of Dennis Day, he played a variation of his Benny character — but not that actual character. On his own program, Dennis Day was a wistful, well-meaning small-town bumbler whose good nature and perseverance always managed to sort out the weekly crisis by program’s end. This Dennis Day sometimes spoke dismissively of that “other” Dennis Day, the one on Jack Benny’s program, giving the series its own unique metaphysical twist — while at the same time not compromising Dennis’s established persona within the Benny troupe.  The program enjoyed a successful five-year run on radio and, while it failed to make inroads on television, Dennis himself enjoyed a successful career as a guest performer on the small screen, on his own and as part of the Benny program.

When Jack Benny moved into television in the early 1950s, tightening budgets and evolving formats meant the days of Jack’s “gang” as a prominent regular feature of the program were numbered. Increasingly, the TV show featured Jack as the master of ceremonies of a variety program, or in sitcom antics revolving around guest stars, with his “gang” in an increasingly limited role. But Dennis Day continued to make frequent appearances on the television series — although he had aged visibly, he had also aged gracefully, which somehow made the continuing naiveté of his character even funnier. Even after the end of Jack’s regular TV series, Dennis continued to appear in the comedian’s series of specials. Offscreen, he enjoyed a quiet, respectable family life — avoiding the perils and temptations of the showbiz spotlight, he remained devoutly religious in his private life, and enjoyed a long and stable marriage that produced ten happy, healthy children. He also invested his money well, lived frugally, and proved himself an extremely astute businessman. He no longer needed to perform by the 1960s, but he continued to do so simply because he had so much fun, even as his relationship with Jack Benny deepened into a sincere and lifelong friendship.

Throughout all the years, Dennis Day pursued a successful career as a nightclub singer, as a recording artist, and as a voice performer in animated films. Even into the 1970s and 1980s, he continued to perform — in TV guest roles, in touring shows, and in dinner theatre — until his battle with Lou Gehrig’s disease finally brought his career to an end. He died in 1988, a seventy-one year old man who somehow had never seemed to age at all, and a performer who made an indelible mark in radio history.