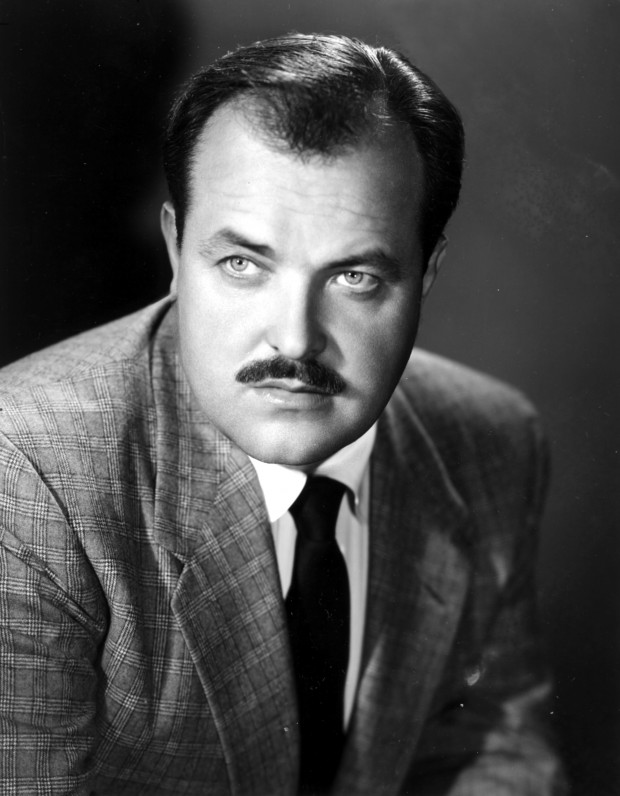 Authoritative, resonant, and powerful. Sensitive, thoughtful and compassionate. Few actors of the radio era combined all these qualities so thoroughly as the man who, in many ways, encapsulates all that was most creative and most memorable about postwar radio drama. William Conrad seemed to be everywhere on the air in the fifteen years following the end of the Second World War. Even later, when radio was reduced to a shadow of its former self, William Conrad remained a booming voice in commercials and special features right up until the end of his own life.  Even the most casual of “old time radio” enthusiasts knows his most famous role, the definitive western hero Matt Dillon. But William Conrad had a career far more varied, far more interesting, and far longer lived than even that legendary portrayal.

William Conrad was born to show business — but not, originally, as a performer. His parents owned and operated a movie house in Lexington, Kentucky, just across the river from Cincinnati. Conrad’s childhood was spent under the arc-lamp glow of its projectors. An avid movie buff, young Bill got his chance to see his film favorites up close when the family relocated to the Los Angeles area — and he spent his teens fixated on the idea of a career as a screen actor. But like many budding actors in the late 1930s, he found an easier entree into acting at the microphone.

Radio station KMPC was an aggressive up-and-comer in the world of independent Los Angeles radio as the thirties became the forties. Owned by Gordon Richards of Detroit, KMPC billed itself as “The Station of the Stars.” That promotional gimmick was made real when Richards sold a minority interest in the station to a coalition of celebrities, including Harold Lloyd, Charles Correll, Freeman Gosden, Paul Whiteman, and Bing Crosby. These personalities lent their names and faces to station publicity, but Richards himself remained firmly in charge, emphasizing the same range of homegrown programming that had worked for his Detroit outlet. His most notable feature at both WJR and KMPC was a baroque horror anthology called The Hermit’s Cave. A shameless appropriation of a format that had proven itself elsewhere as The Witch’s Tale, The Hermit’s Cave offered the KMPC acting company plenty of opportunity for experimentation with microphone technique.

Young Bill Conrad, with his impressive, growling bass, fit right into this group of actors, and before long he was producing the feature as well as acting in it. He seemed poised for a bright future on the air — but that future would have to wait until after the Second World War.

There was no paper-pushing desk job or show biz bond-selling tour waiting for Air Corps Lieutenant William Conrad when he earned his commission in 1943. He found himself escorted straight into the cockpit of a fighter plane, until his superiors realized that he suffered from night blindness. Grounded, Conrad ended up in far more familiar and less hazardous surroundings when he was assigned to the Armed Forces Radio Service. Here he honed his skills as a producer and director alongside such future colleagues as Elliot Lewis and Howard Duff. When he emerged from the service in 1945 he was ready to pick up his civilian career where he’d left off. And he hit the ground running, appearing in dozens of series in hundreds of roles in the years just after the war. He was rarely the star in these early years, but he was always somewhere in the cast — as a thug, as a hard-hitting cop, as a sinister spy, as a tough cowboy, as a hustling newspaperman, even as the occasional bit of comedy relief. He quickly became one of the most dependable, most recognizable actors in Hollywood radio.

Conrad was probably best known during this period for his work on a CBS adventure anthology where he often growled out the program’s memorable epigraph: “Tired of the everyday routine? Ever dream of a life of romantic adventure? We offer you…ESCAPE!” Conrad starred in dozens of Escape episodes, where he came to the attention of producer Norman Macdonnell — who, along with writer John Meston, was developing a new idea in radio westerns. Long the province of kiddie-show adventure, westerns were ripe for a more adult treatment, and the postwar success of adult-oriented crime dramas meant the rise of the adult western was inevitable. Macdonnell and Meston had been toying with the idea since 1949, with frequent western segments on Escape, and had discovered in the network’s archives a dusty audition record for a proposed series about a gritty marshal named Dillon. Nothing had come of that audition, but the format appealed to Macdonnell and Meston — who felt that with the right lead, such a program would be a sure success.

It was John Meston who suggested William Conrad for the Dillon role — despite Macdonnell’s belief that Conrad’s ubiquity would detract from the audience’s willingness to accept him in the part. But when Conrad finally auditioned, Macdonnell’s objections were swept away by the power of his performance. His Dillon was a lonely, weary man, callused by the brutal violence of frontier life, but still firm in his adherence to his own moral code.  The character had been anticipated in some of Meston’s earlier scripts for Escape, but here, as given voice by Conrad, he emerged as one of the most human, fully realized figures radio drama had ever produced.

His nine-year stint as Matt Dillon marked the apex of William Conrad’s radio career, but he continued to appear in anthology roles throughout this period. When CBS revived its prewar experimental drama showcase as The CBS Radio Workshop in 1955, Conrad became a frequent and enthusiastic contributor to the program, both as an actor and as a behind-the-scenes figure. Perhaps his finest single radio performance emerged from the Workshop in 1957 with 1489 Words, an eloquent one-man tour-de-force proving that there’s more to any picture than just the proverbial “thousand words”

The end of network radio drama in the United States found William Conrad just as busy as ever. He remained in demand as a voice in commercials, thundering out the virtues of the 1965 Plymouth Fury with the same authority he’d rung down on outlaws as Matt Dillon. As long as there was a microphone in Hollywood, Bill Conrad would be somewhere near it. He’d already established himself in movies as a reliable supporting actor even as he was building his radio career, and moved easily into television. Although he’d been hurt that CBS never gave him serious consideration for the television role of Matt Dillon — his short, stocky build being too incongruous to be believable as a Western hero — he found plenty of work in the new medium. He was a popular voice-over narrator for everything from nature documentaries and sports films to The Bullwinkle Show. As Bullwinkle‘s hyperdramatic narrator, Conrad revealed his often-overlooked talent for comedy, turning his every line into a sendup of the more serious narrator roles he’d been known for during his radio career, and delivering his lines in a frantic, exaggerated pace that seemed to parody his own distinctive voice and manner.
Conrad was busy in front of the camera as well as the 1960s wore on, with starring roles in the occasional anthology series, and a steady stream of juicy guest-star roles on established dramas. Finally, in 1971, CBS gave him his own TV series as the overweight private eye Frank Cannon, a role that would redefine him for a new generation. He rode the success of Cannon into two similar roles in the 1980s when he starred as orchid-loving investigator Nero Wolfe and as the latter half of Jake and the Fat Man.

Conrad’s role in the latter series proved his last stand. His health declined in the early 1990s, and his heart finally gave out in 1992, bringing an end to the life and career of one of broadcasting’s Renaissance Men. No matter what he did on radio or on television, behind the microphone or behind the scenes, William Conrad was a defining personality of postwar entertainment.