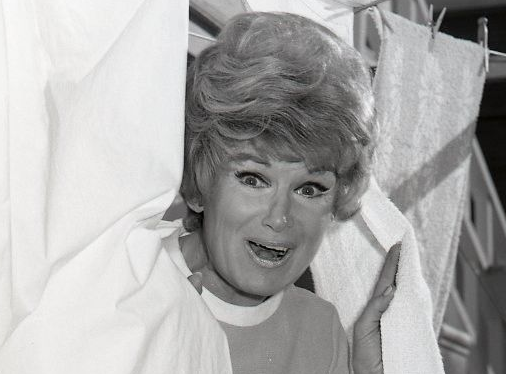 “Why, Thrawkmawtinnnnnnnn…” The Radio Life of Shirley Mitchell

Radio stars were all well and good. They got the covers of the fan magazines and the pride of place in the autograph books and the big dollars when contract time rolled around. But radio itself, as an entertainment medium, would have amounted to absolutely nothing without the legion of outstanding character actors who made up the settings in which the stars were displayed.

Most of these actors toiled in quiet anonymity — working for AFRA scale, snagging a short newspaper profile once in a while, seeing their faces showing up in a “left to right” lineup on one of the inside pages of Radio Guide, feeling satisfied to get a mention in the credits and a bow at the end of the season. But a few of these performers managed to achieve more than that — in the portrayal of distinctive, unique characters that took on real substance. Such a performer was an ebullient young woman from Ohio named Shirley Mitchell.

Shirley Mitchell grew up the daughter of a dry cleaner and his wife, a nice lower-middle-class couple from Toledo. Born in 1919, she was stage-struck from childhood.  Young Shirley convulsed the neighborhood with her impersonations of prominent locals, organized her friends into well-rehearsed shows in barns, attics, and garages, and knew exactly what she wanted to do when she grew up. Her father’s dry-cleaning enterprise was sufficiently successful to give her a shot at college, and she studied drama at the University of Michigan before landing roles with theatre troupes as close to home as Cleveland and as far afield as Massachusetts.

Stock company life was an education in itself, but there was never much money in it, and there was always the chance of being left high and dry in some anonymous tank town far from home if the company fell apart. Shirley knew that she wanted something a bit more consistent — and she found it in radio. By the late thirties, the big nighttime shows were deserting the midwest for Hollywood, but Chicago remained a major network hub for dramatic features.  An ambitious, versatile young actress with a flair for dialect could, if patient and persistent enough, work her way into a cast.

Shirley Mitchell thought she’d finally hit the jackpot when she landed a role on a program called Hap Hazard, starring former Chicago radio comic Ransom Sherman. Sherman had long been a favorite of midwest radio audiences for his collection of absurd characters and free-wheeling formats, and critics often predicted he’d soon become a major national star. None of his formats quite managed to click, although his afternoon variety show Club Matinee attracted a loyal following.  After drifting to Hollywood, he ended up doing supporting roles with Fibber McGee and Molly. In 1941, he convinced the sponsor, S. C. Johnson & Sons, to give him the summer replacement spot and — remembering Mitchell’s Chicago work — he invited her to come west to join his cast.

Like most of Sherman’s formats, Hap Hazard was funny but outré in its appeal, and didn’t lead to a permanent slot on the schedule. No rush of producers clamored for Shirley Mitchell’s services, and she considered going back to Toledo to find a new career. But gradually, the calls began to come. In September of 1941, she landed a role in a new Sunday-afternoon situation comedy just recently spun off from Fibber McGee and Molly, starring Harold Peary as “The Great Gildersleeve.” The script told the story of Dorabelle, a friend of Gildy’s niece, who came for a visit and stayed to flirt — and Mitchell played her with a ripe, drawling Southern accent. She and Peary displayed immediate chemistry, with Mitchell’s fluttery aggression paring nicely with Peary’s flustered embarrassment. Pleased with the performance, producer Cecil Underwood made a note of the young actress’s name.

Shirley Mitchell found other work as 1941 closed and 1942 began. She began appearing in supporting roles on Rudy Vallee’s program, and that summer she got a call from Cecil Underwood. A new writer, John Whedon, had been appointed to take over The Great Gildersleeve. He had the idea of using a semi-serialized format — and this change opened the door for Gildy to have a recurring love interest. Mitchell had made such a strong impression as the ephemeral Dorabelle that Underwood and Whedon decided to create a new, similar character who would take Gildersleeve for an unforgettable ride. Early in Gildersleeve’s second season, the flirtatious widow Leila Ransom moved into Gildy’s neighborhood — and then the fun began. Drawing a page from the epic romance of Andy Brown and Madam Queen a decade earlier, Whedon created an on-again-off-again storyline that kept audiences guessing to the very end. When the wedding fell through at the very last minute in the final episode of the season, listeners were relieved to see Gildy slip free of Leila’s grasp…but knew she’d be back to try again.

And she was. Shirley Mitchell played Leila Ransom for the better part of the next decade, leaving and returning on multiple occasions, usually just as Gildy was getting serious about some other romantic partner. She played the role as a cross between Scarlett O’Hara and a barracuda, all sweetness and sugar until the fangs came out.  Leila became the prototypical character that listeners “loved to hate.” Mitchell found this a bit disquieting, but even before her first season with Gildersleeve was over she’d found another part that was far more likeable.

She joined Fibber McGee and Molly in December of 1942. That program, a Tuesday night ratings powerhouse, had been thrown into disarray by the war. Actor Bill Thompson (the voice of several major supporting characters on the program) went into the Navy, and actor Gale Gordon (who filled other key roles) soon left for the Coast Guard. Producer Underwood and writer Don Quinn rushed to fill the vacancies — and Mitchell was an early choice. She filled occasional supporting roles for several months, and in October 1943 became a regular as “Alice Darling,” a cheerful young war worker who took a room at 79 Wistful Vista. Portrayed by Mitchell in her natural voice, Alice was the opposite of Leila in just about every way — gentle, self-effacing, and perhaps a bit dizzy. But she shared Leila’s hearty appetite for male companionship — albeit on a far more casual basis than her marriage-minded Southern counterpart — and often befuddled Fibber with her long strings of boyfriends.

Alice disappeared after the war, but Leila remained a frequent presence on the postwar air, and Shirley Mitchell’s radio career prospered. She married a Los Angeles physician in 1946, and gave birth to a son and daughter without pausing in her work.  She moved smoothly into television in the early 1950s, notably in a recurring role on I Love Lucy, and as television production consolidated on the West Coast over the latter half of the decade, she worked steadily, remaining a frequent presence in both comedies and dramas well into the 1980s

She returned to radio acting for producer Elliott Lewis in the late 1970s on the Sears Radio Theatre, relishing the chance to perform with old colleagues again.  She became a favorite of the Old Time Radio convention circuit, joyfully reprising her role as Leila Ransom opposite the second Gildersleeve, Willard Waterman, in various on-stage re-creations.  She also branched into animation voice work and even contributed a bit of voice acting to a video game in the early years of the twenty-first century. Until her death in 2013, she remained a zealous advocate for radio — remembering the joy she’d had in performing, and appreciating the joy her performances had given to listeners. Leila Ransom might not have won Throckmorton P. Gildersleeve’s undying love, but radio enthusiasts certainly loved Shirley Mitchell.