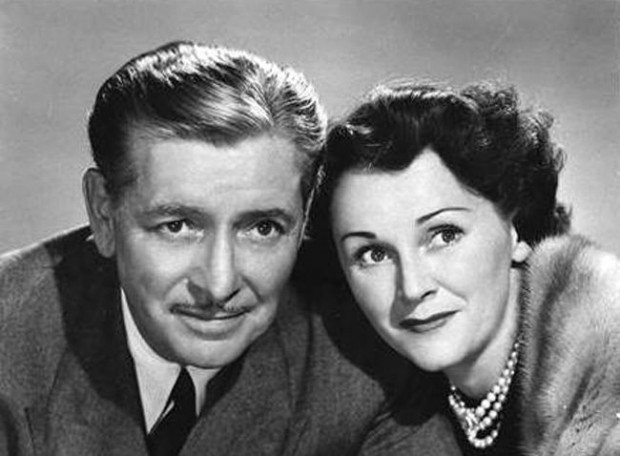 “…we love the Halls of Ivy/That surround us here today…”

From the moment writer Don Quinn first met vaudevillian Jim Jordan at the studios of Chicago’s WENR in the early 1930s, the success of the two men in the burgeoning medium of radio was assured. Don would contribute scripts to Jim and wife Marian’s programs The Farmer Rush Hour and Smackout.  Quinn’s association with the Jordans would continue when The Johnson Wax Program—known by its fans as simply Fibber McGee & Molly—premiered over NBC on April 16, 1935 and soon became one of the country’s most popular radio comedy shows.  Fibber McGee & Molly would also make Don radio’s highest-paid scribe; at the peak of his involvement with the program he was pulling down $3,000 a week.

Yet in the fall of 1949, Don would turn over his head writing duties on Fibber and Molly to his assistant Phil Leslie (who had been with the show since 1943) because he was enthusiastic about a new project that began with an audition disc recorded that June.  Quinn’s concept for his new situation comedy was about a small midwestern institution of higher education, Ivy College, and the misadventures of the college’s head administrator, William Todhunter Hall.  The audition passed muster with the National Broadcasting Company, who added it to their schedule on this date in 1950.  There were, however, some changes made along the way…alterations and tweaks that would make The Halls of Ivy one of the bright spots of postwar radio in the 1950s.

The June 22, 1949 audition for The Halls of Ivy featured Gale Gordon and Edna Best in the roles of Professor Hall and Victoria Hall, respectively.  Gordon was one of radio’s best-known character presences and had even worked with Ivy creator Quinn in Don’s Fibber McGee & Molly days (Gale played Wistful Vista mayor Charles LaTrivia, among other characters).  The actor was also familiar to radio audiences as Osgood Conklin, the autocratic principal on the situation comedy Our Miss Brooks.  The growing success of Brooks threatened to put the kibosh on Gordon’s continuing with Ivy(contractual obligations and all that), so the hunt for a suitable replacement was on.

Nat Woolf, Ivy’s director-producer, sent his good friend Ronald Colman a few of Don Quinn’s scripts and asked him to read them, sensing that it might be a project in which the Academy Award-winning actor (for 1947’s A Double Life) might be interested.  Ronnie was in a state of semi-retirement; he appeared in a movie every now and then to keep his hand in (Colman would star in one of his finest motion picture comedies the year of Halls of Ivy’s debut, Champagne for Caesar)—but he was starting to explore opportunities in front of a radio microphone, appearing as a frequent guest on the anthology series Favorite Story.

Colman’s other “high profile” radio gig was a series of hilarious guest turns on The Jack Benny Program, where he gamely agreed to portray (as himself) the comedian’s long-suffering next-door neighbor.  On Benny’s show, Ronnie was joined by his real-life spouse Benita Hume. Benita had actually retired from show business sometime earlier, but Jack was a stickler for authenticity and coaxed Hume into playing herself on his program rather than hire another actress.  The Colmans demonstrated a delightful flair for comedy in their Benny show appearances—providing a marvelous counterpart to Jack’s clueless oafishness with their proper British bearing and manners.

In retrospect, it’s hard to believe that Ronald and Benita Colman weren’t considered for the leads on The Halls of Ivy from the show’s conception.  Ronnie was no stranger to comedy (with delightful films like The Talk of the Town and The Late George Apley to his credit), but his reputation as a respected actor infused Professor Hall with a dignified demeanor that was tempered with an approachable and appealing likability.  (Some have posited that Colman was really just playing himself.)  The character of Victoria Hall, as played by Benita, was the series’ true delight. Mrs. Hall was a former London musical comedy actress (Victoria “Vickie” Cromwell) who affectionately referred to her husband as “Toddy” and reveled in unconventional antics…like teaching Ivy students to tap dance.  Many of the Ivy broadcasts would relate in flashback the early days of Professor Hall and Victoria’s courtship.

The Halls of Ivy also benefitted from a superlative supporting cast.  Herb Butterfield was heard quite often as Clarence Wellman, the head of Ivy College’s Board of Governors…who frequently clashed with Professor Hall on college matters.  Hall’s ally on the board was John Merriweather, portrayed by Great Gildersleeve star Willard Waterman. When Waterman’s schedule as Gildy conflicted with the program, The Halls of Ivy revealed that Merriweather had a twin brother in Charles (played by returnee Gale Gordon!).  Other occasional Ivy regulars included Arthur Q. Bryan (as Professor Warren), Alan Reed (as Professor Heaslip), Barton Yarborough, Lee Patrick, and James Gleason.  (The Halls had a bit of turnover in the maid department, with household domestics portrayed by Gloria Gordon, Bea Benaderet, and Elizabeth Patterson.)  The show’s broadcasts also spotlighted memorable turns from Barbara Jean Wong, Anne Whitfield, Robert Easton, Jane Morgan, William Johnstone, Sheldon Leonard, and Ken Christy.

Creator Don Quinn had a handicap when it came to The Halls of Ivy.  He was without peer when it came to jokes featuring his signature wordplay…but he’d be the first to admit that he wasn’t particularly strong when it came to the “situation” part of the comedy.  He’d rely on writers like Walter Brown Newman, Cameron Blake, Robert Sinclair, and Milton & Barbara Merlin to help craft the show’s fine scripts.  Perhaps the most famous of Ivy’s writing alumni were Jerome Lawrence and Robert Lee, who went on to write the highly successful stage play Inherit the Wind.  Ivy’s scripts were quite sophisticated and occasionally ahead of their time, tackling taboo subjects such as racial prejudice and out-of-wedlock pregnancy.  The show would deservedly win a Peabody Award for Best Radio Drama Series.

The Halls of Ivy’s longtime sponsor was Schlitz (“The Beer That Made Milwaukee Famous”—kind of fitting for a show about college), with veteran announcer Ken Carpenter extolling the product’s virtues. Henry Russell and Vick Knight’s memorable theme song is surely familiar to some, even if they’ve never listened to the program.  Ivy was heard over NBC until June 25, 1952 (with an episode appropriately titled “The Farewell Party”). Like so many radio shows before it, the series had a brief romance with the small screen when a television version of the show debuted over CBS-TV on October 19. 1954.  Both the Colmans and Herb Butterfield reprised their radio roles (Arthur Q. Bryan also appeared in several episodes as Professor Warren). However, the series faced stiff competition from NBC’s triple threat rotation of Milton Berle, Bob Hope, and Martha Raye, and lasted but a single season.