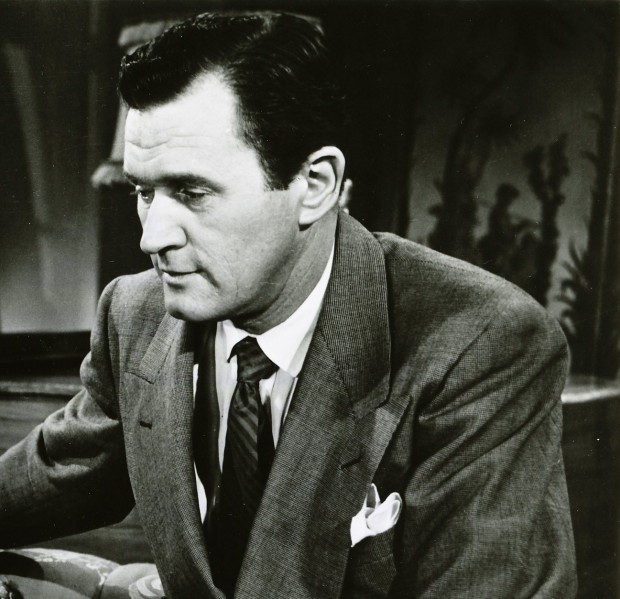 Wally Maher: The Voice of Everyman

Plenty of radio actors were known for their elegant, pear-shaped voices — the Gayne Whitmans, the Gale Gordons, the Tom Collinses, the Howard Culvers, the Bill Johnstones. Those gentlemen never wanted for work during radio’s Golden Era. Leading men with leading-man voices were always in demand…and were always first in line when the plum roles were handed out.

But there was another category of actors who were just as busy, even though they might not have gained quite so much attention — the performers with everyday, man-on-the-street voices. Plenty of scripts called for a truck driver, a security guard, a garage mechanic, a patrol cop, or just plain Joseph H. Blow, Everyman USA. And one of the busiest of these actors was an unassuming fellow named Walter Maher, who packed an awful lot of acting into just forty-three years of life.

Wally Maher was as midwestern as he sounded — a native of Cincinnati, born to an Irish family in 1908. Show business wasn’t his original goal in life. He began his working career as a baggage clerk on the Southern Pacific railroad, a job that exposed him to a wide assortment of voices and dialects as the trains passed through the station. He had a natural talent for mimicry, and soon became a facile dialectician, a hobby that turned into cash when he turned to radio in the early 1930s. Joining the dramatic staff at WLW, the “Nation’s Station,” he soon discovered his ability with voices was accompanied by a natural talent for acting. When he got a chance to go east, he grabbed it. A short tenure in supporting roles on Broadway brought him to the attention of Hollywood. So he headed west in 1935 to establish himself as a reliable, effective player of humorous character parts.

Big time radio was moving westward at just about the same time that Maher was — and it wasn’t long before he emerged as a reliable second-echelon talent behind the biggest microphones on the Coast. He appeared in the very first Hollywood-based broadcast of the Lux Radio Theatre in June of 1936 — and in the broadcast after that, and in the broadcast after that, and the broadcast after that. Over the next six years he was featured in hundreds of different roles on the prestigious Lux broadcasts, appearing alongside (and often out-acting) the biggest screen stars of the time. He was a frequent performer on other dramatic anthologies as well, and even had plenty of juicy work on leading comedy programs — notably in a stint opposite novelty comedian Tommy Riggs as Wilbur, the blundering boyfriend of Riggs’ little-girl character Betty Lou. Wherever a director needed a voice that sounded “you know, like a regular guy,” Wally Maher could expect to get a call.

Maher had a history of respiratory trouble, which kept him out of military service during the Second World War. His 4F status turned out to be a big boost to his acting career, at a time when the long arm of Uncle Sam had greatly thinned the roster of available radio talent. Maher worked harder than ever during the war years, and his likeably gruff voice was a welcome addition to practically any cast. He was a regular on the Cavalcade of America , playing soldiers, sailors, airmen, Coast Guardsmen, merchant seamen, war correspondents, factory workers — just about any sort of character with something to contribute to the war effort. And it was during the war era that he began a long association with Suspense — a series in which he turned in some of his finest, most memorable work through the postwar years. His 1946 performance as the steely, grim-voiced narrator of “Dead Ernest,” the tense story of a cataleptic in a race against the embalmer’s knife, stands out as perhaps his single most searing radio performance, and one which he repeated to equal effect the following year.

The war era also brought Maher, at last, a worthy role as a leading man — but not your conventional chiseled-chinned, golden-voiced leading man. In 1944, Maher was tapped to portray hardboiled private eye Michael Shayne in a new Mutual-Don Lee radio adaptation. Shayne was a redheaded Irish tough guy with a mordant sense of humor, and that characterization precisely fit Maher’s favorite type of role. He played the part with an air of bemused sarcasm. While he never ventured so far into self-parody as Howard Duff would do a few years later as Sam Spade, there was an unmistakable meta-consciousness in his approach to the role — a subtle commentary on the essential absurdity of the hardboiled genre that managed to avoid stepping over the line into mockery.

Maher’s health issues interfered occasionally with his performances as Shayne — a reflection as much on Maher’s crushing regular workload as it was on the fragility of his lungs. He remained with the series through January of 1947, and the strength of his performance helped carry the series from a narrow West Coast audience to the full Mutual network by the end of its run. He had given the character value as a national property — but when a new series began in 1948 he was passed over for the lead in favor of budding movie star Jeff Chandler. No matter. Wally Maher always had plenty of work. By 1948 he was already well established as Police Lieutenant Riley, the friendly enemy-foil of freelance troubleshooter George Valentine in the delightful West Coast adventure drama Let George Do It. Maher’s chemistry with series star Bob Bailey made every performance crackle, bringing together two great masters of sardonic byplay. He filled a similar role opposite Dick Powell in Richard Diamond, Private Detective — a series that presented itself as a none-too-subtle parody of The Adventures of Sam Spade (itself a broad parody of the general conventions of hard-boiled drama). Despite the overlapping metatexual layers at work in such postwar radio crime dramas, Maher’s performances never called attention to themselves as yuk-yuk spoofs. He was the rare actor with the gift of being amusing without being funny.

But Maher could be completely convincing in deadly serious roles. He stepped up in 1950 to co-star opposite plummy-voiced Bill Johnstone in The Line Up, one of several hyper-realistic police procedural dramas following on the cheap grey sport-coat tails of Jack Webb’s Dragnet. Gone were the underlying notes of parody in such programs; every case was presented with grim, relentless realism.

Wally Maher gave his last great Everyman performance as Sergeant Matt Grebb — a dour, no-nonsense cop in an unspecified Northern California city, who did most of the legwork for Johnstone’s Lieutenant Ben Guthrie. His chemistry with Johnstone (whose aristocratic voice hadn’t lost the stern haughtiness that had characterized his work as “The Shadow” a decade earlier) was excellent — with Maher’s raspy working-class manner a perfect contrast against Johnstone’s blue-blooded tones. Wally Maher was working as hard as ever even as radio drama began to sense a grim post-television future. In addition to his roles in Let George Do It and The Line Up, he continued to make frequent appearances on the Lux Radio Theatre, on Suspense, on Escape, on The Whistler, on This Is Your FBI, on Night Beat, on as many programs as his schedule could accommodate. He even turned in occasional comedy performances opposite George Burns and Gracie Allen and Amos ‘n’ Andy, as if to prove he hadn’t turned entirely serious. And he had little reason to fear television — he’d long since proven his mettle as a screen actor and could look forward to a rewarding future career in TV character work. After all, he was only in his early forties.

But the future doesn’t always live up to its promise in the life of Everyman — and for Wally Maher that future ended all too soon. He’d had a lung removed in 1950, hoping that would put an end to his respiratory problems, but all the surgery did was postpone the inevitable. He became weaker and weaker during 1951, with Raymond Burr stepping in as an emergency replacement on The Line Up, and he didn’t quite make it to the end of his 43rd year. He died in December 1951, an actor whose roles seem, even now, to be so full of vibrant, everyday life.