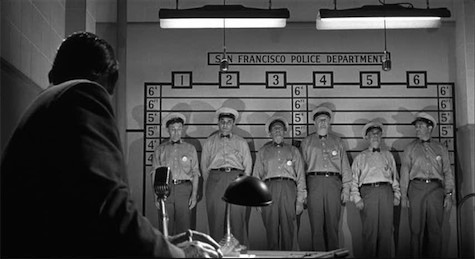 The introduction of Jack Webb’s Dragnet to NBC Radio’s schedule in June of 1949 would soon inspire several imitators focused on the meticulous details of police procedure.  There was Broadway’s My Beat (though Beat technically premiered before Dragnet, having first been heard in February of that same year) and Twenty-First Precinct (debuting on CBS in 1953)…and in-between was The Line Up.  The Line Up made its radio debut on this date in 1950 as a summer replacement for The FBI in Peace and War.

In the police headquarters of “a great American city,” Lieutenant Ben Guthrie investigates crimes with the help of victims and witnesses asked to look over suspects paraded out in “the line up”—thus providing the series with its title.  Each episode also featured Guthrie’s partner, Sergeant Matt Greb, explaining to those witnesses (and by design, the listening audience) the purpose of the line up:

Each of the suspects you will see will be numbered.  I’ll call off the number, their name and charge.  If you have any questions or identification, please remember the number assigned to the prisoner as I call his name.  At the end of each line when I ask for questions or identification, call out the number.  If you’re sure or not too sure of the suspect, have him held.  The questions I ask these suspects are merely to get a natural tone of voice—so do not pay too much attention to their answers, as they often lie…

“All right, bring on the line,” Greb would conclude after his remarks.  It was a great gimmick for the series, which was dedicated to adhering to the level of realism established by Dragnet.  The Line Up didn’t shy away from controversial topics, nor flinch when it came to depicting the brutality present in certain offenses.  (The program also mimicked the deadpan humor that was a staple of Webb’s show.)  The only substantial difference between the two series is that The Line Up’s plots were not based on actual police files; it relied on the creative imagination of scribes like Morton Fine & David Friedkin, E. Jack Neuman, and future film director Blake Edwards.

Except for its initial summer appearance, when The Line Up was overseen by “Mr. Radio,” Elliott Lewis, the director-producer of Line Up was Jaime del Valle.  The program suffered the same fate as many of CBS’ dramatic offerings (Broadway’s My Beat, Escape) in that it was frequently bounced around the network’s schedule, challenging its listeners to a bizarre game of hide-and-seek.  The Line Up also experienced difficulties in landing a sponsor; it was sustained for most of its three-year run, save for a brief period of check-signing by Wrigley’s Gum and Chrysler-Plymouth.

The Line Up may have closed its radio squad room in February of 1953, but its broadcast career was just beginning.  CBS gave the series a new lease on life by introducing a television version (produced by Desilu) on October 1, 1954.  The boob tube Line Up featured Warner Anderson as Guthrie, and character veteran Tom Tully as Inspector Greb.  (I first believed that Greb got a promotion, and was happy for him…until someone pointed out to me that since the locale of the series was established in San Francisco “Inspector” was the closest rank to “Sergeant.”  The move to Frisco also prompted a good scouring of files from the San Francisco Police Department for script ideas.)  Both Guthrie and Greb would soon be joined by a third officer in Inspector Fred Asher, played by Marshall Reed.

The Line Up was a solid hit for CBS in the five seasons it aired as a half-hour series on Friday nights at 10:00 pm (it was ranked among the Top 20 in the Nielsens in its first three seasons)…but a decision to expand the show to an hour in its sixth season sounded the death knell for the program.  The creative minds behind the show also did a housecleaning of the cast, retaining only Anderson and assigning him four newcomers.  The last telecast of The Line Up was on January 20, 1960, after which it was sent to the Old Syndication Home in reruns titled San Francisco Beat.

The Line Up did spawn a feature film version in 1958, produced by del Valle and directed by the man who had helmed the series’ pilot episode, Don Siegel.  Warner Anderson and Marshall Reed reprised their respective roles as Guthrie and Asher, but the unavailability of Tom Tully for the film gave character actor Emile Meyer a chance to play the Greb-like Inspector Al Quine.  (Siegel had actually wanted the movie to concentrate solely on the villains—played by Eli Wallach and Robert Keith—but was vetoed when del Valle insisted the show’s fans would be perplexed by the absence of the regulars.)  Since The Line Up is rarely rerun today, the 1958 film is really the only way for a new generation to experience what the show was like, outside of surviving radio broadcasts.

And speaking of surviving radio broadcasts of The Line Up (I swear these segueways just write themselves), Radio Spirits is pleased to present sixteen of them (including the May 27, 1950 audition show) in the collection Witness.  Pay particular attention to “The Senile Slugging Case” (09/12/51), because you’ll hear a familiar voice in Barton Yarborough among the suspects (how did Ben Romero wind up in a line up?).  The set also features Howard McNear, Virginia Gregg (a/k/a Mrs. Jaime del Valle), Parley Baer, Peggy Webber, Sheldon Leonard…and many more of your favorites from “Radio Row.”