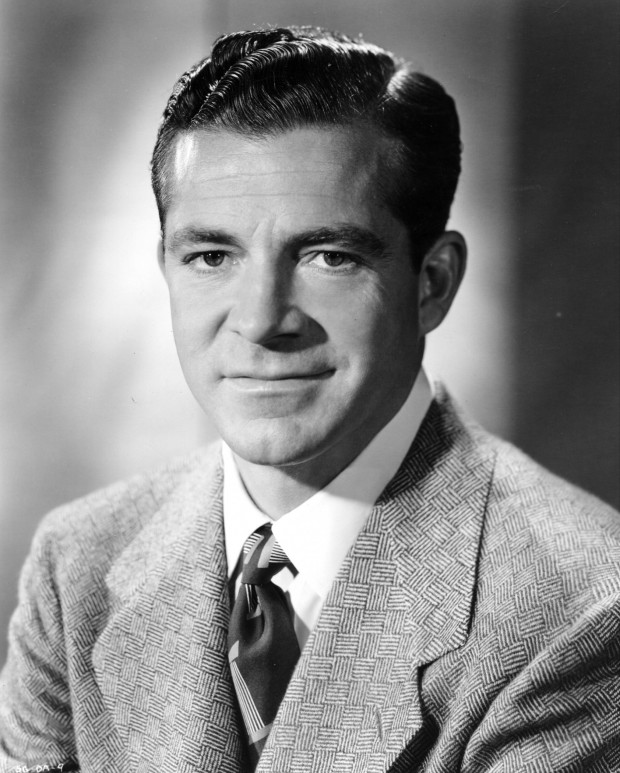 Dana Andrews spent his entire career portraying tough, driven men on the screen and on the air, but his bitterest enemy turned out to be the one most difficult to defeat: one which lurked within the depths of his own mind. But, he did defeat that enemy — not with fists, or at the point of a gun, but through sheer determined discipline.

Carver Dana Andrews began life in a tiny Mississippi town with the unlikely name of “Don’t.” He was one of thirteen children born into a strict Southern Baptist family.  Between his upbringing and the name of his home town he was certainly not unfamiliar with a life of disciplined. His path seemed laid out for him: a good, solid education and a respectable job in a quiet town.  Somewhere along the line, however, young Carver decided that he’d rather make his own decisions.

He gave up a promising job as an oil-company accountant, stuffed what he could carry into a grip, and thumbed his way west. In his heart, he wanted to be in show business. He had a healthy baritone voice, and saw himself as a singer — but once he got to Hollywood, just then well-supplied with glossy-haired pearly-teethed crooners, he found the market for his talents to be somewhat less than he had anticipated.

He ended up returning to the oil business, although in decidedly reduced circumstances. Instead of a wearing a clean white collar every day and adding up columns of figures in an oil-company ledger, he donned overalls and a clip-on bow tie, and manned the pumps at a gas station in Van Nuys. A humbling experience for most, but Carver Dana Andrews, even then, was a tough guy. Too tough, in fact, to go on calling himself Carver.  Dana had a snappier, manlier ring to it, and it was under that name that he decided to become an actor at the Pasadena Playhouse.

The Playhouse was one of many repertory companies populating the greater Los Angeles landscape, offering would-be thespians a taste of stage life and a roughscrabble education in the ways of show business. You worked your way up from the bottom in these companies, starting in thankless walk-on roles, working your way up to bit parts, then supporting roles, and maybe, if you were good enough and smart enough and tough enough, you might grind your way up to leading parts. Dana Andrews was that good and that smart and that tough, and by 1938 he had come to the attention of one of producer Sam Goldwyn’s many roving talent scouts. Goldwyn had the habit of picking up fresh young promising talent and throwing them into roles to see if they could handle the even greater grind of moviemaking.  Andrews rose to the challenge, in a small but juicy role in William Wyler’s The Westerner. From there, the parts came faster and got better, until 20th Century Fox beckoned with offers of more prestigious roles.

By the mid-forties, when many leading men were in the service, Dana Andrews had become one of the top names of the screen — playing a wide range of tough-yet-sympathetic, charismatic-yet-vulnerable parts. He shone alongside Henry Fonda in The Ox-Bow Incident, and he became a critical favorite as the driven investigator in the film-noir classic Laura. And, he hit the peak of his fame, his popularity, and his prestige as a tormented Air Corps veteran trying to pick up the pieces of his life after the war in the Oscar-winning The Best Years of Our Lives.

As Dana Andrews was climbing to the top of the Hollywood pyramid, he was being followed by something as dark and deadly as any of the adversaries he tackled on film. Southern Baptists didn’t drink, didn’t touch alcohol. But, Dana Andrews had come a long way from Don’t, Mississippi, and Hollywood was awash in booze. Liquor was the lubricant greasing the wheels of the movieland machine — it helped make the deals that made the films, it helped the talent and the crews unwind after endless days and nights on the set, it lurked in every swank nightclub and in every upholstered office and behind every glamorous, glittering doorway. And so, very early in his Hollywood career, Dana Andrews started drinking.

He could handle it at first, he thought. It helped knock down the nerves, helped manage the stress, it made work just that much easier. Just one more for the road, here’s how, bottoms up, make it a double, and before he knew it, Dana Andrews couldn’t live without one more drink. When word began to get around among the producers and directors and casting offices, Dana Andrews suddenly wasn’t quite right for this role or that role. “Oh, he’s talented, no question,” they’d say.  “But..” And, then they’d make that universally-recognized gesture: a fist with a thumb extended, tipped up and toward the mouth…the universally-recognized sign for a drunk.

Dana Andrews kept plugging, kept taking work. If the movies weren’t interested, they weren’t the only game in town. When radio producer Frederic W. Ziv came calling in 1952, Andrews jumped at the chance to star in his own series. He’d enjoyed his appearances on the Lux Radio Theatre, the Screen Guild Theatre, and the various other Hollywood showcases of the air.  His voice was perfect for radio, and the broadcasting routine was far less arduous than the continuous grind of moviemaking. It was just then the fashion for Hollywood favorites to star in their own syndicated series — and the role offered to Andrews seemed ideal for his established persona of the tough, tormented All-American Man.

The program grew out of the true-life story of one Matt Cvetic, an FBI operative who had posed as a Communist in order to infiltrate the Communist Party USA in the years prior to World War II. His highly- embellished account of his adventures as a counteragent became a best-seller in the years of the postwar Red Scare, and the book’s episodic nature made it perfect for radio. Ziv radio productions were never flashy, but they were produced to a high standard, with well-turned scripts by quality writers and excellent supporting casts. Andrews was a perfect fit as Cvetic, conveying all manner of anger and disillusionment, tension and determination in his interpretation of what could have been just a cheap propaganda role. I Was A Communist For The FBI premiered in the spring of 1952, and eventually sold to over 600 stations.

Andrews recorded 78 episodes of the series, enough for about two seasons. Usually two seasons were all that was required for such a program — after which the costs of production would likely be recovered, and everything after that would be profit for the distributor. The series could be sold year after year after year to new markets, but the talent only got paid for the original recording sessions. So, Dana Andrews had to keep plugging, had to keep trying for roles an actor of his talent shouldn’t have to try out for, and all the while he kept drinking until finally he couldn’t take it anymore. He looked in the mirror and saw the man he could have been and determined to be that man after all. He looked at colleagues that he admired, actors with the discipline necessary keep the bottle in its place — among them the president of the Screen Actors Guild, the amiable Ronald Reagan.

He had seen Reagan up close and knew him to be a man who knew when to say “when” and when to say “none for me, thanks.” Dana determined to follow that example, and the example of other disciplined performers. He pushed himself and pushed himself through the 1960s, working in television, working on the stage, making the occasional film, taking whatever parts he could get, and even served a term himself as SAG president. Finally, he put down the bottle for the last time in 1969. He had beaten his toughest foe with discipline and with dignity.

Dana Andrews lived another twenty-three years after that, and continued to act into the early 1980s. When he died, in 1992, friends and fans remembered a man who could have been a bigger star than he had been, but couldn’t have been a braver man.