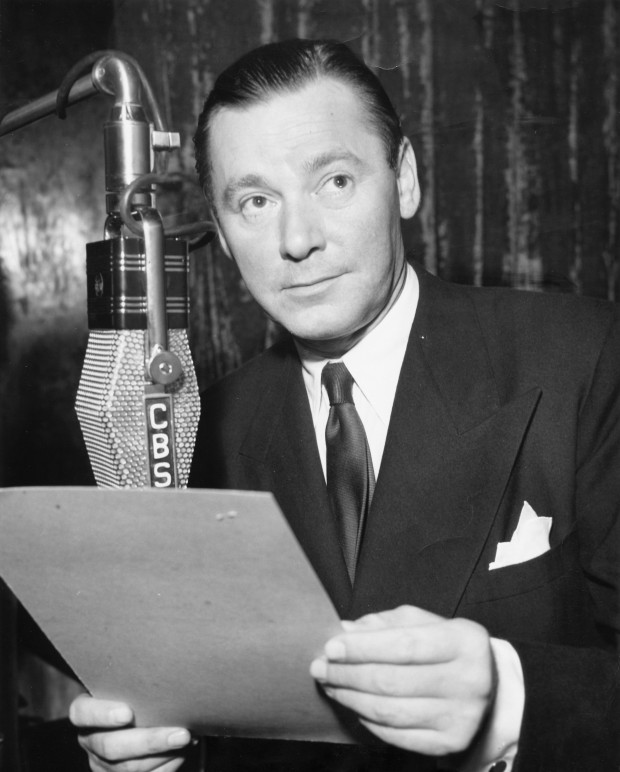 “…there you will find…The Man Called X!”

Before his long, distinguished career as a stage and motion picture actor, Herbert Marshall embarked on a variety of jobs (including accounting) that led up to his enlisting in the first World War.  While serving on the Western Front in 1917, Marshall was hit in his left knee by a sniper during the Second Battle of Arras in France…and doctors were forced to amputate his left leg after a series of operations failed to save it.  Herbert—or “Bart,” as he was known to his friends—wore a prosthetic wooden leg after that, and as someone who’s watched the actor in many films including Blonde Venus (1932), Foreign Correspondent (1940), The Letter (1940), and The Little Foxes (1941)…if I didn’t already know he had a wooden leg, I’d never be able to tell.  (He walked with a slight limp—emphasis on slight.)

On radio, it mattered very little if Marshall had a wooden leg or not.  Herbert had a rich, resonant voice that served him quite well in front of a microphone as a guest on such programs as The Lux Radio Theatre, The Gulf/Lady Esther Screen Guild Theatre, and The Cavalcade of America.  On this date in 1944, Herbert Marshall made his debut on a series tailor-made for him: a summer show that was filling in for the vacationing Lux Radio Theatre…and that came to be known as The Man Called X.

In its short eight-week summer run, The Man Called X was a little far removed from the espionage drama of later years.  Marshall played Ken Thurston, a private operative who was more detective than secret agent and was joined on the program by veterans Hans Conried (as Thurston’s friendly nemesis, Egon Zellschmidt) and Mary Jane Croft (as fiancée Nancy Bessington).  Man Called X had a light comedic touch to its proceedings, but that began to be downplayed when the show got the greenlight for a full season in the fall (it moved to the Blue Network, though it kept its sponsor, Lockheed).  Conried and Croft had disappeared, and Thurston’s reluctant sidekick was renamed Pegon Zellschmidt.  Leon Belasco, a character actor who was also a violinist and conductor, stepped into the role of Pegon and would play the part until the show left the radio airwaves in the early 1950s.

There would be no summer vacation for The Man Called X after its 1944-45 season.  The show would be called upon to continue selling Pepsodent while Bob Hope got a little R&R, and Man Called X would repeat this function in the summer of 1946 as well.  After that, Man Called X temporarily halted its globetrotting until April of 1947, when it returned to CBS for Frigidaire (hawked by Wendell Niles, of course).  The show ended its CBS run in September of 1948 (and Niles went on to sell his appliances on The New Lum ‘n’ Abner Show.)

By the time of the series’ run on CBS, The Man Called X had firmly established its format.  Ken Thurston worked for an agency known only as “The Bureau” (possibly an offshoot of the U.S. State Department).  Thurston, a.k.a. “X,” could take solace in knowing he at least had a proper name that would allow him to sign checks…but his boss was known only as “The Chief.”  The role of the Chief was played by a number of actors, the most identifiable being character great Will Wright.

Thurston’s “dangerous” assignments took him to various hot spots around the globe—had the airlines’ “frequent flyer” program been in operation at the time, they would have been providing a lot of free airfare to Mr. “X.”  More often than not, once Thurston had made himself comfortable in his new locale, he’d wind up bumping into Pegon—a slightly shady con man who had reason to be where Ken had landed because he had a “relative” working in the area.  Despite Mr. Zellschmidt’s reluctance to get involved, he proved to be a reliable ally in helping Thurston bring miscreants like drug smugglers and black marketeers to justice.

The Man Called X flourished during the post-WW2 era, as listeners thrilled to Ken Thurston’s adventures in exotic locales.  In the fall of 1950, NBC resurrected Man Called X after a two-year hiatus, and Marshall and Belasco continued in their roles of Thurston and Pegon, assisted by a cast of Radio Row pros like John Dehner, Lou Merrill, Gloria Blondell, Ed Begley, Howard McNear and many more.  Chesterfield, RCA Victor, Anacin, and Ford all took turns paying X’s bills, and with the exception of a brief period in May of 1951 — when star Marshall went in for surgery due to a pulmonary embolism (Van Heflin, John Lund, and Joseph Cotten filled in during Marshall’s convalescence) — the stars and format continued until the show signed off on May 27, 1952.

In 1956, syndicator Frederick Ziv revived The Man Called X for a TV series that ran for 39 episodes. The show certainly gave a nod to its radio roots (created by real-life intelligence operative Jay Richard Kennedy), but author Michael Kachman (Citizen Spy: Television, Espionage and Cold War Culture) notes that the TV Thurston character was also based on an American journalist named Ladislas Farago. Gradually transitioning from ink-stained wretch to espionage agent, Farago worked for the Office of Naval Intelligence—a precursor to the Central Intelligence Agency.  The small screen version of X starred Barry Sullivan as Thurston.

“Wherever there is mystery…intrigue…romance…in all the strange and dangerous places in the world…there you will find…The Man Called X!”  That familiar opening for the program will clue in old-time radio lovers that a half-hour of top espionage excitement is to follow.