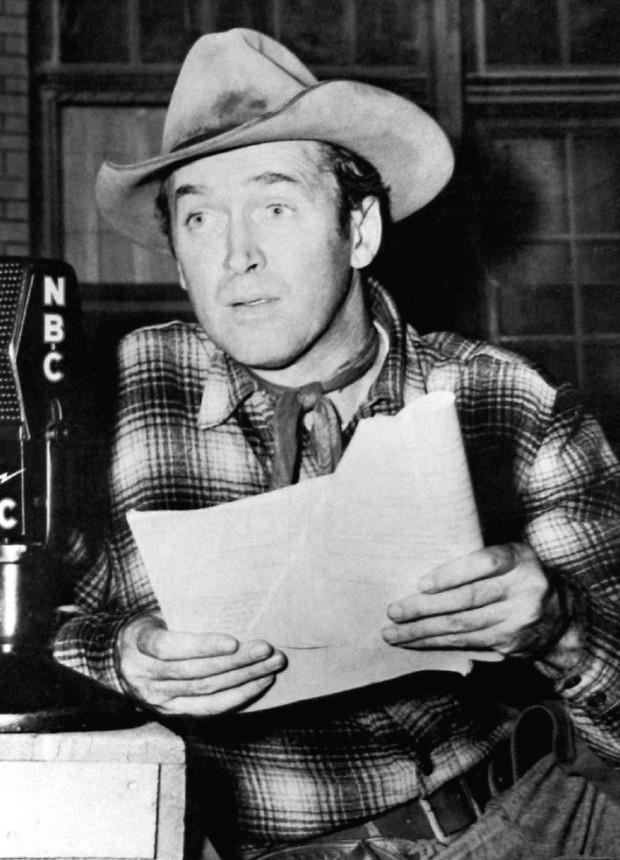 “…the Texas plainsman who wandered through the western territories, leaving behind a trail of still-remembered legends…”

In Leonard Maltin’s anecdotal old-time radio page-turner The Great American Broadcast, there’s a photograph of Parley Baer chatting with Academy Award-winning actor James Stewart—and in the caption underneath Maltin notes that Stewart was “one of the best of the Hollywood stars who moonlighted on radio.”  Most old-time radio veterans solidly agreed with this assessment.  Dick Beals had high praise for Jimmy’s thespic skills behind a microphone, observing that Stewart “was a total professional as a radio actor and never tried to draw attention to himself as the star.”

Stewart demonstrated that he had impressive radio chops as far back as the mid-30s, appearing on the likes of Hollywood Hotel and The Lux Radio Theatre. As a contract player with M-G-M, he made regular visits to the studio’s Good News program between 1937 and 1940.  But Jimmy wouldn’t commit to a weekly series until the 1950s—when transcribed programs made it easier to work around celebrity schedules—and when he did, he was the star of one of radio’s best “adult westerns,” premiering on this date in 1953: The Six-Shooter.

The origins of what became The Six-Shooter go back a little further than its official premiere date; the pilot was originally broadcast on April 13, 1952 as an installment of NBC’s Hollywood Star Playhouse (1950-53).  Star Playhouse took a different tack from the other dramatic anthologies on the air (Lux, Screen Directors’ Playhouse, etc.), presenting original half-hour plays with big Hollywood names instead of the usual movie-adaptation-with-original-star(s) formula.  (For example, an August 31, 1952 episode of Star Playhouse, “Statement in Full,” served as the radio drama debut of Marilyn Monroe.)  The reaction to Stewart’s Star Playhouse episode was most positive, and NBC commissioned an audition for a possible series on July 15, 1953.  (Much of the same script was used, only a subplot from the Star Playhouse presentation—a Wells Fargo robbery that propels the initial plot—was excised.)

“The man in the saddle is angular and long-legged,” went the show’s standard opening. “His skin is sun-dyed brown…the gun in his holster is gray steel and rainbow mother-of-pearl, its handle unmarked. People call them both ‘The Six-Shooter.’”  Except for his horse, Scar, drifter Britt Ponset (Stewart) was the series’ only recurring character, with The Six-Shooter functioning as something of a Western anthology.  Ponset was not a lawman, but an easy-going cowpoke who roamed around doing odd jobs to keep body and soul together…never looking for trouble, though it frequently found him.  The character of Ponset was strikingly similar to those individuals played by actor Stewart in the Anthony Mann-directed movie westerns of the 1950s (Winchester ’73, Bend of the River)—reluctant heroes who functioned in a morally ambiguous universe.  Ponset helped to round up criminals and right wrongs, but refused to look at the world as good or bad, black or white.

The scripts for the series were written by Frank Burt (credited as the creator), who playfully used sources like Cinderella (“If the Shoe Doesn’t Fit”) and Charles Dickens’ A Christmas Carol (“Britt Ponset’s Christmas Carol”) for inspiration.  Yours Truly, Johnny Dollar’s Jack Johnstone directed The Six-Shooter, and the music came courtesy of Basil Adlam—who composed the memorably haunting theme “Highland Lament.”  Though The Six-Shooter arrived a little late to make a significant amount of noise in Radio’s Golden Age, a lot of the blame for its brief run can be placed on the shoulders of the show’s star.  After four episodes of sponsorship by Coleman Home Heaters, the show became a sustained program…with NBC scrambling to find another sponsor to pay the bills.  According to Jack Johnstone: “Chesterfield begged and begged and begged for months trying to get sponsorship, but Jim didn’t feel that because of his screen image that it would be fair…for him to be sponsored by a cigarette.  There was another advertiser who wanted very much to sponsor the show, but again Jim, and MCA, which owned the show, said no.”

Without an “angel” to write checks, The Six-Shooter eventually climbed into the saddle and rode away on June 24, 1954.  This was not the end to the series, however; in the fall of 1957, NBC-TV premiered The Restless Gun—a small screen oater clearly derived from the radio program.  (Like its radio inspiration, Restless Gun first aired as a pilot on an anthology show…on a March 29, 1957 telecast of CBS’ The Schlitz Playhouse of Stars.)  The main character was now known as “Vint Bonner,” and played by former Fox-movie-musical-turned-tough-guy John Payne.  Producer David Dortort—creator of the later Bonanza and The High Chaparral—recycled many Six-Shooter scripts (with Frank Burt receiving credit in the form of “based on characters created by”).  Restless Gun was a Top Ten hit in the Nielsen ratings in its first season (#8), but in its sophomore year the numbers took a dip and it was cancelled on June 22, 1959.  (Reruns of the series were a weekday/Saturday morning staple on ABC until September 1960.)