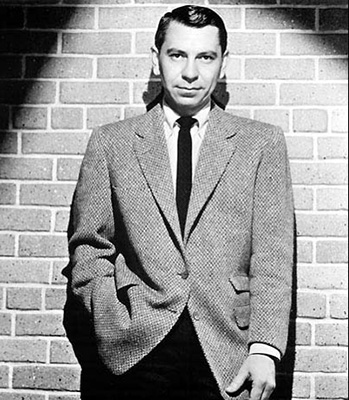 “The story of your police force in action.”

Joe Friday: Room 5.  That was the title of the script for a proposed TV pilot, written by Herb Ellis and Jack Webb, as 1948 was marching to a close.  If this treatment about a “private eye” had been picked up, we might not be celebrating an anniversary today…for it was in 1949 on this date that the police procedural that set the standard for the crime dramas to follow premiered over NBC Radio: Dragnet.  Dragnet would soon dominate all facets of pop culture in a very short period of time, permeating the nation’s vocabulary with catchphrases like “All we want are the facts, ma’am” and inspiring comedic tributes by everyone from Stan Freberg (and his million-selling record St. George and the Dragonet) to Daffy Duck & Porky Pig (the 1956 cartoon Rocket Squad).

Actor Jack Webb was working at San Francisco’s KGO in 1946, where he was the mastermind behind series such as One Out of Seven and The Jack Webb Show (a half-hour comedy show—no joke).  The show that garnered him the most attention, however, was a detective drama called Pat Novak, For Hire—in which Webb played a part-time gumshoe who spouted dialogue so hard-boiled it skirted the very edge of parody.  Its popularity allowed Jack to leave Frisco and head out for bigger things, like a network show of his own (Mutual’s Johnny Madero, Pier 23—which was similar to Pat Novak) and appearances on nationally broadcast series like Escape, Suspense, and The Whistler.  Radio kept Webb busy, and yet he found time to jumpstart a movie career with appearances in features like Hollow Triumph (1948).

It was landing the small role of a lab technician in an Eagle-Lion film entitled He Walked by Night (1948) that would change Jack Webb’s fortunes practically overnight.  Night, a police procedural loosely based on the terrifying exploits of a real-life serial killer, utilized the services of L.A.P.D. Sergeant Martin Wynn as a technical advisor.  Wynn and Webb would strike up conversations during downtime on the set, and though Marty was initially distrustful of Jack (Wynn hated shows like Pat Novak, which didn’t present police officers in the most positive light), he seized on the opportunity to talk up the concept of a program about “real cops.”  He even offered the actor access to actual police files.  Truthfully, Webb was cool to the idea at first (he didn’t think such a show would perform well in the ratings), but the success of He Walked by Night changed his mind.  To prepare for the show he was planning out in his head, Jack “went to school” by accompanying Wynn and his partner Vince Brasher on routine patrols in their prowl car, taking notes and learning “cop lingo.

Jack Webb had played the titular shamus Jeff Regan, Investigator on CBS Radio’s West Coast network…so he decided to give the Tiffany network first grab at his proposed Dragnet series.  CBS was pretty blasé about Webb’s idea, and when they finally agreed to have a listen to an audition record—provided Jack foot the bill for the expense of recording one—Webb turned his attention to NBC.  Seeing as most of their talent was now working for CBS (courtesy of the legendary “talent raids”), NBC was far more receptive to Jack’s proposal.  West Coast operations director Homer Canfield fronted Webb $2,000 for an audition record, and when that was a success NBC gave it the greenlight for its June 3, 1949 premiere.

It took a while for Dragnet to build a following…but a laudatory review from critic Jack Crosby (who called the show “an astonishing cops-and-robbers job simply because nothing very astonishing happens on it”) soon catapulted the program to the point where it no longer had to depend on NBC’s largesse (as a sustaining show) and it grabbed a sponsor in Fatima Cigarettes.  In retrospect, it’s difficult to comprehend why people didn’t recognize how groundbreaking the show was from the very first broadcast.  Webb supervised every aspect of the show, while getting an assist in the writing chores from his old cronies James E. Moser and Richard L. Breen.  Jack also cast performers who were able to adapt to the naturalistic acting style he had chosen for the show, radio pros like Peggy Webber (who would often portray Joe Friday’s mother), Herb Ellis, Harry Bartell, Vic Perrin, and Virginia Gregg.  (The dialogue on the show was to be spoken in the manner of someone “pouring a cup of coffee.”)

Barton Yarborough, an actor with whom Webb had worked many times in the past, won the role of Sergeant Ben Romero, Joe Friday’s partner.  Romero provided the perfect counterbalance to Friday: whereas Joe was a confirmed bachelor and occasionally too dedicated when it came to the badge, devoted family man Ben was more soft-spoken and possessed a self-deprecating sense of humor.  Yarborough’s Romero would head off for The Great Precinct in the Sky with the December 27, 1951 radio broadcast, “The Big Sorrow” (actor Bart suffered a fatal heart attack). Friday tried out several partners (including Barney Phillips as Ed Jacobs) before settling on Officer Frank Smith—played by radio veteran Ben Alexander.

The December 16, 1951 installment of TV’s Chesterfield Sound-Off Time served as a special introduction to the boob tube version of Dragnet, which quickly became Must See TV (in the 1953-54 season, it was second only to I Love Lucy as the nation’s favorite program).  The TV show even inspired a 1954 feature film, with Jack Webb and Ben Alexander reprising their roles as Friday and Smith.  At the same time, Dragnet continued to be a radio favorite even when the aural medium was starting to see its audience being enticed by its more attractive sibling, TV.  The radio version continued to be heard until September 20, 1955, with an additional two years of “repeats.”  The TV Dragnet would run until August 23, 1959.

Jack Webb’s decided to retire the television series while it was still quite popular, but re-launched the program on January 12, 1967.  Jack had asked Ben Alexander to reprise his Frank Smith role, but because Alexander was already committed to another series (he was on ABC’s The Felony Squad) Sergeant Friday took on another partner: Officer Bill Gannon (portrayed by Harry Morgan).  Though the chemistry between the two actors often recalled the Friday-Smith years, Dragnet had by this time become a little too pro-cop, getting the nickname “the fuzz industrial.”  Its attempts to be relevant with narcotics-themed episodes has given the series a campy reputation (with such deathless dialogue as “You’re pretty high and far out—what kind of trip are you on, son?”).  Sadly, because no one seems to know who owns the original film negatives from the 1951-59 run, it’s the 1967-70 version that’s rerun the most.