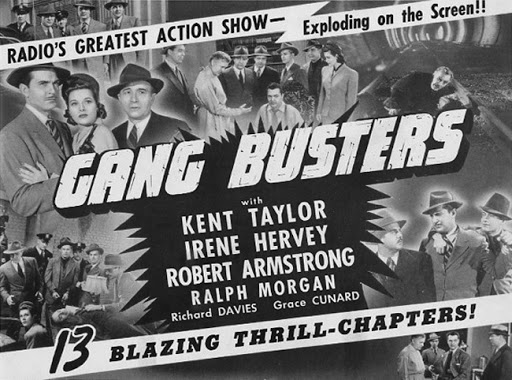 “The only national program that brings you authentic police case histories…”

Radio’s resident “crime buster” was inarguably director-producer-writer Philips H. Lord, who gravitated to creating crime-themed programs. Perhaps the fate met by his first success over the airwaves, a folksy drama entitled Seth Parker, pushed him in that direction. That series became the victim of a publicity stunt gone awry (involving a schooner that wound up shipwrecked in the South Pacific). Among the popular “law-and-order” shows created by Lord were Mr. District Attorney (1939-52), Counterspy (1942-57) and Treasury Agent (1947-57). But, his biggest success, which premiered on this date eighty years ago in 1935, was a series that would influence later radio dramas like Dragnet and modern-day television programs like America’s Most Wanted and Unsolved Mysteries. We know it as: Gang Busters!

The premise for what ultimately became Gang Busters was a devastatingly simple one—though at the time of its premiere over NBC Blue, the series was known as G-Men. (Not to be confused with the similarly named James Cagney motion picture, released at about the same time.) The show’s stories concentrated on the notorious “outlaws” who were then making newspaper headlines: John Dillinger, “Machine Gun” Kelly, Bonnie and Clyde, “Pretty Boy” Floyd, etc. Lord had been able to title the series “G-Men” because he had obtained the blessing of Federal Bureau of Investigation director J. Edgar Hoover to cooperate with the program’s production. However, Hoover soon objected to the director-producer’s heavy concentration on gunplay and expressed his dissatisfaction by withdrawing the FBI’s participation. That lead to G-Men’s cancellation in October of 1935…but it would soon reemerge in a revamped form over CBS beginning January 15, 1936 under its now-legendary title.

As Gang Busters, the series continued in the same vein as G-Men, except that the focus was now directed to lesser-publicized crime cases (usually with a local, state or federal flavor). This did not, however, minimize the program’s excitement…in fact, Gang Busters’ audiences were sucked in from the get-go with one of radio’s most memorable openings. A police whistle and sirens kicked off the proceedings, followed by shuffling feet, screeching tires, gunshots and the rat-a-tat of machine guns. (This loud and brash cacophony introduced the slang phrase “coming on like gang busters” to the American lexicon.) After each docudramatic case, Phillips H. Lord himself would interview either a local lawman or federal agent who had figured heavily in that evening’s dramatization. Lord later turned over his host duties to H. Norman Schwarzkopf, who had grabbed national headlines as one of the lead investigators in the Lindbergh baby kidnapping case. (Schwarzkopf’s son, “Stormin’” Norman Jr., later became well-known for his participation in the 1991 Gulf War.) Other Gang Busters hosts included Dean Carlton and John C. Hilley…not to mention retired New York police commissioner Lewis J. Valentine, who departed in 1946 after being asked by Gen. Douglas MacArthur to oversee the reorganization of the various police departments in postwar Japan.

Perhaps the best-remembered feature of Gang Busters (in addition to its rock-‘em-sock-‘em opening) was the famous “Gang Busters clues”—a gimmick that would appear at the end of each program. A national alert for actual criminals would be broadcast, giving listeners detailed descriptions of wanted evildoers. It was estimated that these “clues” helped nab 110 individuals in the show’s first three years—286 criminals by 1943. (This advocacy of encouraging the public to act as informers and bounty hunters continues today…particularly during your local newscast, I’d be willing to gamble.) The Gang Busters program would prove to be one of radio’s most durable; during its twenty-plus years on the air, it aired over all four major radio networks and was sponsored by the likes of Colgate-Palmolive, Sloan’s Liniment, and Waterman Pens.

Since the program’s production was based in New York City, many of that town’s familiar radio voices were heard on Gang Busters, including Lesley Woods, Ted de Corsia, Elspeth Eric (whose specialty on the show was playing molls), Alice Reinhart, Santos Ortega, Don McLaughlin, Raymond Edward Johnson, and Joan Banks (not to mention Ms. Banks’ husband, Frank Lovejoy). At the time of Oscar-winning actor Art Carney’s passing in 2003, one of Carney’s obituaries featured an observation from Richard Widmark…who stated he was unaware of Art’s comedic talents until Carney achieved fame on The Honeymooners. (It seemed that Widmark was only familiar with Art’s dramatic chops during their lean-and-hungry days as Gang Busters actors.)

The success of Gang Busters soon spread out into other media: DC Comics instituted a popular comic book series based on the program, and a 1942 Universal serial remains one of the most entertaining chapter plays in the history of cliffhangers (with a final sequence that will knock your socks off). In March of 1952, Gang Busters was adapted to the small screen as a series that alternated weekly with another radio-to-TV transplant, Dragnet. The curious aspect of the TV Gang Busters was that it was on the air as a “stop-gap” program; it was acting as a mere placeholder until Jack Webb was able to deliver a Dragnet episode every week. (Gang Busters the TV show was given its pink slip in October of 1952; it finished #8 in the Nielsens with a 42.4 rating…making it possibly the highest-rated show in the history of the boob tube to be ingloriously cancelled.)