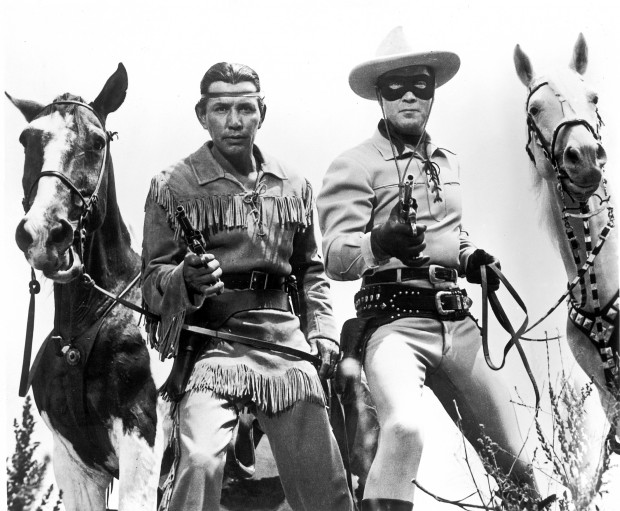 Nowhere in the pages of history can one find a greater champion for justice…and you only need to look back eighty years ago on this date in 1933 to find the debut of one of radio’s legendary heroes and a true pop culture icon.  When The Lone Ranger made its first appearance over WXYZ radio (though history notes that a “test broadcast” was conducted a day earlier), it would put the masked man (and his faithful Indian companion, Tonto) among the forefront of the great fictional heroes of all time; his influence is still being felt today with the announcement of a feature film based on his exploits that is to be released this year (we’ll reserve editorial comment on this one).

The origin of the Lone Ranger has been told, retold and embellished since the program’s 1933 debut—but the essential story is that the Ranger was one of six Texas Rangers caught in an ambush by outlaw “Butch” Cavendish and his gang.  A Native American named Tonto found the survivor and nursed him back to health…and when he was back at full speed, he and his Indian friend dug six graves to convince the outlaws that all of the Rangers were killed—while he himself donned a mask (made from the vest of the Ranger Captain, his brother Dan) and in his hidden guise tracked down each and every member of the gang.  Realizing that there was a place for him to fight injustice “in the early Western United States,” he continued on in his new identity, accompanied by Tonto and riding a white horse named Silver.  (“Hi-yo, Silver…away!”)

The show was an immediate hit, attracting a large adult audience, even though The Lone Ranger was originally directed toward kids.  The program was picked up for broadcast by the Mutual Network, and later switched to the Blue Network of NBC (which later became ABC).  The show lasted until September 3, 1954, with transcribed reruns heard on ABC until June of 1955 when it moved to NBC, where the final rerun was heard on May 25, 1956.  In the meantime, a popular TV version was going strong on ABC..after having already branched out into comic books, movie serials, etc. years earlier.

The success of The Lone Ranger convinced George W. Trendle, the manager of station WXYZ, that the formula was sound enough for a second program—one that would update the crime-fighting hero to a modern era.  Thus, The Green Hornet was created…a radio series which also premiered on a January 31, three years after The Lone Ranger’s debut (so it’s celebrating its 77th anniversary today).  In a major metropolitan city, the publisher of one of the city’s newspapers (The Daily Sentinel) also donned a disguise to battle the criminal element and underworld eating away at the quality of the life of that very burg.  That publisher was Britt Reid, and with a faithful sidekick in his valet Kato, Britt used a souped-up car (the Black Beauty) instead of a horse, but ran down bad guys all the same.

The Green Hornet soon became just as popular as The Lone Ranger.  Two years after its WXYZ debut, it also got a national audience when it moved to Mutual, and then to Blue/ABC in November of 1939.  It would be heard over that network until December 5, 1952—and, like the adventures of that masked man of the Old West, would also lead to comic books, radio serials (one of which has been discussed previously here on the blog) and a TV show which ran briefly for one season in the 1960s.

With the passage of time, an interesting mythology about the Reid family was created: Britt Reid was the scion of Dan Reid—the same Dan Reid who was the son of the fallen Ranger Captain on The Lone Ranger…and hence the surviving Ranger’s nephew.  (That would make Britt Reid The Lone Ranger’s grand-nephew, for those of you keeping score at home.)  It should be pointed out that it took many years for this to develop—but the culmination came with a November 11, 1947 Hornet broadcast (“Too Hot to Handle”), in which Britt tells his father (Dan) that he is The Green Hornet.  The senior Reid then fills Britt in on the exploits of another masked vigilante with whom he had ridden with long ago…and to make sure listeners got the point, the strains of the William Tell Overture—The Lone Ranger’s theme—could be heard in the background.