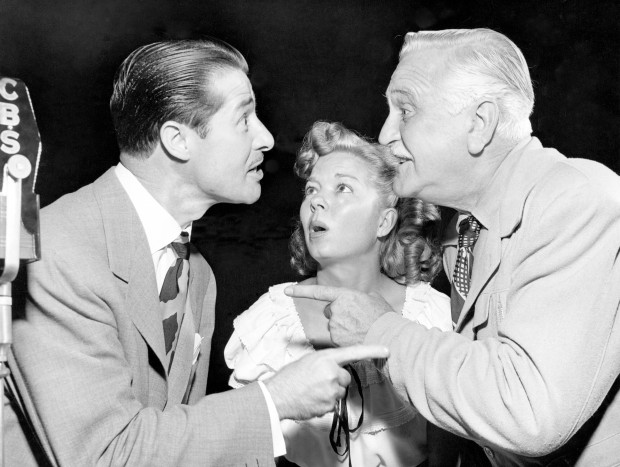 The Honeymoon’s Not Over

For a show that had a relatively short life on radio and television, The Bickersons has maintained a dominating presence in American pop culture.  We use the term “Ozzie & Harriet” to describe a wholesome, too-good-to-be-true husband-and-wife coupling; and, a constantly quarreling twosome receives the designation “Bickersons.”  The famed husband-and-wife battlers, who made their radio debut sixty-seven years ago on this date, continue to be referenced in movies (1970’s MASH), TV shows (NewsRadio) and even video games.

The characters of John and Blanche Bickerson were created by comedy writer Phil Rapp (who also had a hand in the evolution of Fanny Brice’s alter ego, Baby Snooks), and were inspired by the real-life squabbling that frequently erupted between himself and his wife Mary.  Joel Rapp, Phil’s son, related in Gerald Nachman’s Raised on Radio: “I’ve hidden under a lot of tables in my day…my father would scurry off to the typewriter while the dialogue was still fresh.”  Rapp conceived Mr. and Mrs. B as a remedy for the sweetness and light generated by other spousal happy-ever-afters like the aforementioned Nelsons, and later, Jim and Margaret Anderson of Father Knows Best.

The couple who became known as “the battling Bickersons” made their radio debut on a series called Drene Time—a half-hour NBC comedy-variety series heard during the 1946-47 season.  Don Ameche, film star and one-time announcer-straight man to Edgar Bergen & Charlie McCarthy, was the show’s M.C. and the lovely Francis Langford, formerly of The Bob Hope Show, was Drene Time’s resident vocalist.  Drene Time also featured the music of Carmen Dragon and the comedy of young Danny Thomas, who frequently participated in the Bickersons skits as Blanche’s ne’er-do-well brother Amos. (Amos affectionately referred to John as “Jocko,” and John would often advise his brother-in-law to “drop dead.”) At a certain point in the program, Ameche and Langford transformed themselves into John and Blanche Bickerson in a segment that Drene announcer Toby Reed would describe as “The Honeymoon is Over.”

The Bickersons sketches always adhered to a simple formula: John, who suffers from a crippling case of “insomnia,” keeps Blanche awake with his snoring—so Blanche returns the favor by robbing him of slumber with her incessant nagging and chattering.  The writing was sharp and funny (Blanche: “Before you married me, you told me you were well off…” John: “I was, but I didn’t know it…”), and paved the way for later disagreeable television couples like the Kramdens and the Bundys.  Though the sketches usually eschewed the happy ending central to The Honeymooners (“Baby…you’re the greatest.”), deep down, listeners knew that the couple really did love one another, and their verbal donnybrooks were just a way of letting off steam.

After the cancellation of Drene Time, Don Ameche and Francis Langford continued on in the fall of 1947 with The Old Gold Show on CBS Radio.  Carmen Dragon followed the two of them to this new program, and the three of them were joined by announcer Marvin Miller and MGM comic actor Frank Morgan. (Morgan and Phil Rapp were certainly well-acquainted with one another, having both worked on the Good News and Maxwell House Coffee Time programs.) Surviving scripts from The Old Gold Show (showcased in two volumes edited by Ben Ohmart) reveal that the series is one of radio’s true lost treasures—“lost” because most extant broadcasts contain only the Bickersons sketches (the last fifteen minutes of the program).  The weekly Morgan/Ameche encounters are riotously funny (with Langford, Dragon and Miller participating as well) and for reasons unexplained, Rapp never thought to include Frank in the Bickersons pieces—though this might have been a force of habit, since Morgan rarely appeared in the Baby Snooks sketches on Coffee Time.  (Morgan would have made the perfect sponging relative…on Blanche’s side, of course.)

In the fall of 1948, The Bickersons became a recurring sketch on Edgar Bergen’s show, with actress Marsha Hunt replacing Francis as Blanche. The Bickersons then took an extended vacation from radio until the summer of 1951, when it became a full-fledged half-hour series (summers on CBS for Phillip Morris); Langford had returned to the fold by that time, but Ameche had been replaced by future That Girl dad Lew Parker.  An attempt to bring the couple to TV also proved futile; though Ameche and Langford performed the character sketches on two programs: Star Time (1950) and The Frances Langford-Don Ameche Show (1951-52—which featured a young Jack Lemmon).

John and Blanche’s resurgence in popularity would not come about until the release of three comedy albums from the Columbia label in the 1960s: the first one entitled The Bickersons, with The Bickersons Fight Back and The Bickersons Rematch the successful follow-ups.  (The albums were essentially new recordings of previously-used Phil Rapp scripts.)   Still, the beloved battlers continue to entertain a new generation of listeners today, thanks to son Joel Rapp, who has done an impressive job promoting his father’s timeless comic creation.