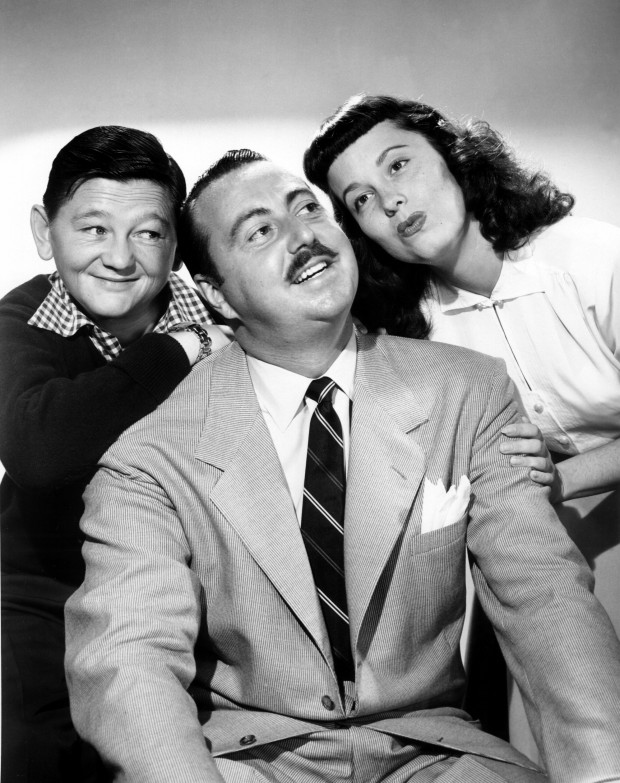 There were two types of comedy competing for listener attention during the Golden Age of Radio — vaudeville comedy and character comedy — and most comedy performers on the air could be placed firmly into one camp or the other. A few performers straddled both — Jack Benny comes immediately to mind — but it was very rare for a radio character to move from one style to another. One who did, and with outstanding success, was Throckmorton P. Gildersleeve.

Today, The Great Gildersleeve is one of the most fondly remembered of radio’s comedic figures — an earnest, well-meaning fellow who often found himself the unfortunate victim of his own pomposity. As delineated by Harold Peary and Willard Waterman over the program’s seventeen-year run, Gildy emerged as a figure of great depth. This was a testament not just to the actors who played the part, but also to the writers who gave him words, and to the supporting cast who gave him a believable, textured setting.

Throckmorton P. Gildersleeve hadn’t always been such a well-rounded personality. When he first appeared on the scene in the late 1930’s, he was merely one in a long parade of exaggerated comic types to emerge from the typewriter of the vaudeville-influenced former cartoonist Don Quinn.

Quinn, the creator of Fibber McGee and Molly, was known for his broadly-comic characters — not the least of whom were Fibber and Molly themselves, who started out in the mid-thirties as caricatures familiar to anyone who’d ever seen a small-time husband-and-wife act cavorting on the stage. The broadness of the personalities wore away over time, however, leaving room for Quinn to surround them with an array of wildly exaggerated comic-strip-style supporting characters, portrayed by such veterans of Chicago radio as Bill Thompson, Hugh Studebaker…and Harold Peary.

Peary’s natural voice — rich, mellow, and musical — lent itself best to a certain type of characterization. Although he had had some success on the air as a romantic leading man/crooner type before joining Quinn’s troupe, his speaking voice seemed best suited to the portrayal of authority figures — and given Fibber McGee’s impudent abrasiveness, the more pompous the authority figure the better. Peary began playing these types during Marian Jordan’s absence from the McGee program in 1938, when Fibber was in desperate need of a strong foil. By 1939, these random blowhards began to coalesce into a single personality. His first name might be Wilbur in one episode, or George in another, and his relationship to Fibber might be that of a banker, a doctor, a dentist, or an old classmate — but the last name would always be the most pompous name Quinn could bring to mind: Gildersleeve.

By 1940, Gildersleeve became a Character as opposed to a mere “character.” He gained the permanent name of “Throckmorton P. Gildersleeve”, he became Fibber’s friendly-enemy next-door, and he assumed a position in the community as the manager of the Gildersleeve Girdle Works. He became so popular with listeners that, in the summer of 1941, he gained his own program.

Don Quinn didn’t have the time or the energy to write the new series, so the job was turned over to Leonard L. Levinson, a very different sort of writer. Levinson’s sense of humor was far, far subtler than the falling-closet gaggery favored by Quinn, and it was his style that would define The Great Gildersleeve for its entire run. He established Gildy as a tenderhearted soul behind his bluster — a responsible foster parent to his orphaned niece Marjorie and nephew Leroy, a benevolent employer to his maid Birdie, and a loyal friend to his associates in his new hometown of Summerfield. When Levinson entered the service in 1942, he was replaced by the team of John Whedon and Sam Moore, who would carry Gildersleeve even further down that road, creating perhaps the finest pure character comedy of the 1940’s.

Whedon and Moore fleshed out the town of Summerfield, turning it into a vivid, realistic image of wartime small-town America. Gildy’s friend and sparring partner Judge Hooker, and his off-again on-again girlfriend Leila Ransom, would soon be joined by Peavey the druggist, Floyd the Barber, Police Chief Gates, Bessie the scatterbrained secretary, bumbling Mayor Terwilliger, combative Mr. Bullard from next door, demanding Aunt Hattie, and many other figures with their own subtle comic quirks, but all essentially real people who responded to the week’s situation in an honestly human manner. Within this setting, Throckmorton P. Gildersleeve himself became more and more real, more serious-minded, more sympathetic. The bluster and the pomposity became occasional, lovable personality quirks rather than the defining traits of the character. Fibber McGee, Wistful Vista, and childish pranks across the backyard fence faded quickly into the past.

Adding to this sense of realism was Whedon and Moore’s effective use of serialization. Freeman Gosden and Charles Correll had proven the effectiveness of serio-comic serialization on radio as far back as the 1920’s, but the technique had been eclipsed since the late 1930’s by the rise of wisecracking Broadway and film comedians on the air, comics where — above all else — the gag was the thing. Perhaps more than any other program of the 1940’s, The Great Gildersleeve hearkened back to the gentler, more contemplative humor of the early Amos ‘n’ Andy, with its seamless week-to-week continuity during the mid-1940’s. Listeners heard Gildy’s romance with Mrs. Ransom blossom, flower, wilt, and fade — only to sprout again. Listeners followed with increasing interest Gildy’s campaign for mayor, the rise and fall of his new romances with school principal Eve Goodwin and the exotic Dolores Del Ray — the latter of which led to that favorite Amos ‘n’ Andy technique, a breach-of-promise suit — and the growing pains of Marjorie and Leroy.

And as these storylines unfolded, episode by episode, the town of Summerfield itself came to life. Listeners could easily visualize its streets and neighborhoods, the homey surroundings of Peavey’s Pharmacy and Floyd’s Barber Shop and the hall where Gildy’s club, the Jolly Boys, met to sing harmony around the piano, the cramped little office at the Water Department where Gildy tried to maintain decorum, the reservoir up in the hills where grouchy old Charlie stood guard. The town became an idealized window into how America viewed itself during the 1940’s — and echoes of that warm, friendly community would be heard well into the 1960’s, when John Whedon played a key role in developing another idealized small town, Andy Griffith’s Mayberry.

Character comedy is very difficult to do well. Any competent writer can string together jokes from a file or come up with outlandish comic situations, and any competent actor can get laughs reading such material. But to truly bring characters to life — to point up the humor in their experiences without turning them into caricatures, and to keep them sympathetic without descending into bathos — required the sort of highly-refined writing and acting talent that became increasingly scarce as radio grew. With dozens of different programs consuming material by the carload, it became very easy for the mediocre and the trite to not only find a place on the air, but to thrive.

But those programs, by and large, however long they may have lasted, aren’t remembered today. They didn’t create enduring images in the minds of the audience, and they couldn’t transcend the loss of a writer or a star the way The Great Gildersleeve did. Whedon and Moore left the series in late 1947, but the setting they established was so vivid, the characterizations so clearly defined, that other writers were able to fall right into line and continue the program without a hitch. When Harold Peary left the series in 1950, his old Chicago colleague, and sound-alike, Willard Waterman replaced him without missing a beat. Gildy remained Gildy — because listeners knew him. They knew who he was, what he believed, what he might do in any given situation. His voice might sound a little different, but that could happen to anyone. He was still the water commissioner with a precocious nephew, a wholesome niece, an understanding housekeeper, a stable of girlfriends, and the same old neighborhood pals. Summerfield was still, and always, the town everybody remembered.

“What a character!” was young Leroy’s favorite exclamation when he caught his uncle in some wild escapade. But, it could just as easily be an exclamation of praise and recognition — for Throckmorton P. Gildersleeve was, indeed, one of radio’s great characters.