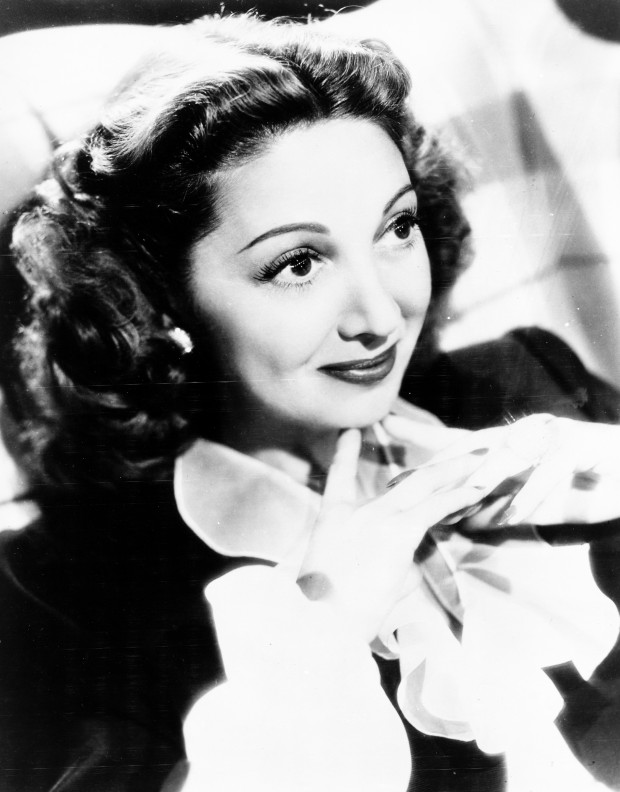 This week’s birthday girl was born Sadye Marks in Seattle, Washington—the daughter of newly arrived Jewish immigrants from Romania. Much of her childhood, however, was spent in Vancouver, British Columbia. At a Passover seder, fourteen-year-old Sadye was introduced to a popular vaudeville entertainer who was born Benjamin Kubelsky…but was just starting to make a name for himself as Jack Benny. Despite Sadye’s attempts to appear older (by dressing up in her sister’s high-heel shoes and a borrowed dress), Jack (eleven years her senior) didn’t give her the time of day. In fact, he unknowingly insulted her while she was treating the seder guests to a violin recital (by walking out on her performance). So, the next night, Marks and several of her girlfriends went down to the theater where Benny was headlining…and sat completely stone-faced during his act.

Three years later, Mary and her family moved to San Francisco. One night, after Benny played the Pantages Theater, she re-introduced herself at the stage door entrance around back. Jack still refused to give her a tumble. But, the third time was the charm…after a few more years went by and Jack found himself entertaining in Los Angeles. On a blind date with one of the members of an acrobatic act, he couldn’t help but notice that the young woman with whom he had been set up looked awfully familiar. It was Sadye, all grown up…and Jack fell head over heels in love. Benny even went down to her place of employment, the now-legendary May Company department store, and pretended to peruse the items in her department (lingerie) while she spared him no embarrassment. The couple enjoyed a long distance courtship after that—Benny would often call her several times a day while he was on tour—and when Sadye got engaged to another man, Benny finally gave in and proposed to her. They married in 1927.

In vaudeville, it was not uncommon for performers to use their wives as partners in their acts: one of the most famous teams was George Burns & Gracie Allen, of course, but other talented duos included Fred Allen & Portland Hoffa, Jesse Block & Eve Sully and Bennie Fields & Blossom Seely. (The trend would later continue in radio with the addition of Jim & Marian Jordan, Goodman & Jane Ace and Ozzie & Harriet Nelson.) Jack followed tradition by making Sadye his partner. For performing purposes, she had some cosmetic surgery done (bobbing her nose) and she dyed her dark hair honey-blonde. Sadye never really considered herself a performer in the traditional sense, and when Jack began his show for Canada Dry on NBC Blue in May of 1932 she probably thought that would be the end of her show business career. But on an August broadcast, husband Jack pressed her into service to play the part of Mary Livingstone (a Plainfield, New Jersey resident who billed herself as the comic’s biggest fan) when the actress originally hired failed to appear.

Sadye’s stint on the program was originally planned to be brief…but the network received so much mail applauding her participation that Jack persuaded her to stay on as a regular. Sadye would later change her name legally to Mary Livingstone…though she personally preferred being addressed as “Mrs. Jack Benny.” While her contributions to the show—her infectious laugh and dry, sarcastic manner—would be just one of the many building blocks in what ultimately made The Jack Benny Program one of radio’s most successful comedy shows, there was always a bit of an enigma about her weekly appearances. Namely—what exactly was Mary’s function on the program (besides getting big laughs)?

Most members of Benny’s “gang” served distinct purposes: Don Wilson was Jack’s announcer; Phil Harris the show’s bandleader; Dennis Day the program’s tenor; Eddie “Rochester” Anderson Benny’s loyal chief-cook-and-bottle-washer. Mary’s only assigned task seemed to be to serve as Jack’s foil. You couldn’t technically call her his “girlfriend” because Jack dated a number of women in addition to Mary, and though she’s sometimes been referred to as a “secretary” she didn’t type or take much dictation. Yet whenever Mary’s verbal barbs lanced Jack a little too hard he’d often threaten to send her back to the May Company…and on at least one broadcast Mary herself refers to Jack as her “boss.” Perhaps it’s best not to think too much about the occupation implications; whatever her job was she excelled at it, always ready to waylay the “boss” with an impeccably timed wisecrack whenever he started to believe a bit too much of his own press. Mary also became well-known for reading weekly letters from her family in Plainfield, referring to her not-at-all-attractive sister Babe (frequently a target of Jack’s insults) and her mother (who had a mutual antagonism toward Mary’s employer).

As accomplished a comedienne as Mary was, she was not immune to the kind of blooper that made old-time radio such a joy to listen to (both then and now). One of her famous flubs was heard on the October 27, 1946 broadcast. She mispronounced “Swiss cheese” as “chiss sweeze,” and allowed Benny’s writers to milk the gag for several shows after the initial goof. A December 3, 1950 episode found Mary pronouncing “grease rack” as “grass reek”…and the creative staff were off to the races again. By the mid-1950s, Mary had started to develop a crippling case of mike fright and she began to cut back on her appearances on Jack’s radio program (she appeared in a few of his earlier TV shows as well, before tapering off). She pre-recorded her lines for each broadcast and, on occasion, her adopted daughter Joan would act as a stand-in, mouthing her mother’s words.

By 1958, Mary had decided to recede from the limelight, only occasionally appearing on talk shows and as a guest star on other programs. She had put in quite a bit of time on the Benny show, and even enjoyed a brief movie career both with her husband (she appears in 1933’s Mr. Broadway, and had vocal cameos in films like Buck Benny Rides Again and It’s in the Bag!) and as a solo performer—she’s one of several stars in the 1937 concoction This Way Please (which also features radio’s Fibber McGee & Molly, Jim & Marian Jordan).  Mary even plays reluctant referee between her boss-husband and his nemesis Fred Allen on Jack Benny vs. Fred Allen: The Feud! Happy birthday, doll!