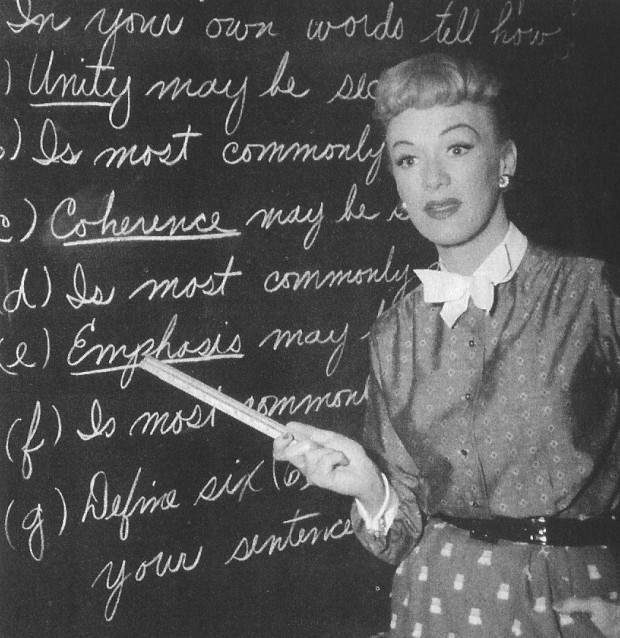 When critics discuss the stereotypes common in Old Time Radio, one that comes up often is the portrayal of women as dithering little featherbrains barely able to function without the guidance of a man. But, this is a stereotype of a stereotype — and was far outweighed by the presentation of strong, smart women on the air throughout the Golden Days of the medium. And, no woman better epitomized for radio the strong, smart woman of the 1940’s than Eve Arden — best known on the air for her role as the tart-tongued schoolteacher “Our Miss Brooks.”

Connie Brooks was the distillation of an entire career spent portraying wised-up, but likable, women. The “Eve Arden Type” was as much a common bit of casting shorthand as the “Clark Gable type” or the “Joan Crawford type.” And, it was a role played to perfection by its creator, a tough California girl named Eunice Quedens.

Born in 1908, Quedens felt the call of show business from an early age. She didn’t enjoy her childhood. Torn between divorced parents, and burdened by insecurity about her looks, she jumped at a chance to escape into a new world and a new identity. When she was sixteen, she quit school and joined a touring stock company. By the early 1930’s, she had cast off Eunice Quedens completely, taking the name “Eve Arden” from a jar of Elizabeth Arden cold cream on her dressing table. No longer the self-conscious schoolgirl, Eve Arden carried herself assertively, with the swagger typical of the snappy Depression-era “business girl.” That persona translated easily into her film roles. She was rarely the leading lady, but she was always a welcome second lead — usually as the sensible best-friend figure who heard out the leading lady’s problems, grabbed her by the shoulders, and told her to snap out of it. Or, just as often, Arden would appear as smart-mouthed comedy relief, cracking off sarcastic commentary from the sidelines as the hero and heroine writhed through their paces. Whether appearing as a down-at-her-heels put-upon secretary or a mink-wrapped martini-sipping sophisticate, Eve Arden always played herself first.

With a persona built around snappy dialogue, Eve Arden was a natural for radio. When the medium began emphasizing Hollywood-originated programming in the late 1930’s, Arden was a natural for the preeminent movieland showcase, Lux Radio Theater. It was on that series, on February 20, 1939, that she made a memorable appearance in an adaptation of her film hit Stage Door. Ginger Rogers, Rosalind Russell, and Adolphe Menjou shared the mike that night, but Arden’s recreation of her movie role was the standout performance on one of the series’ best broadcasts. She made several subsequent appearances on Lux, and made the rounds of various variety programs during the early 1940’s. Finally, in 1945, she landed her first regular radio job as the leading lady of Danny Kaye’s comedy-variety program for Pabst Beer.

The Danny Kaye Show was a bit outre for mainstream sensibilities, with its emphasis on surreal situations and Kaye’s tongue-twisting patter songs, but Arden acquitted herself nicely, providing a stern comic foil to Kaye’s capering lunacy. The two had known each other for several years before the radio series, collaborating in the Broadway musical Let’s Face It in 1941. Despite the fact that both Kaye and Arden were married, they carried on a clandestine affair for several years. When Arden’s husband returned from the war in 1946 she asked him for a divorce, expecting that Kaye would divorce his wife — who happened to be his head writer, Sylvia Fine. When that didn’t happen, the collaboration with Kaye, both on and off stage, came to an unpleasant end. Eve Arden was too smart and too tough to be knocked down by life, however, and her best moments were yet to come.

During the postwar era, the Columbia Broadcasting System began a program to develop its own line of comedy series, independent of the advertising agencies that had dominated program development for most of network radio’s life. Achieving early success with My Friend Irma — the program that, above all others, epitomized the dizzy-dame stereotype — the network began casting about for another idea that could feature a female lead. This new program would feature a character as different from rattle-brained Irma as possible — a professional woman, say. A school teacher. A smart, snappy school teacher who’s often at odds with her pompous principal, her goofy boyfriend, and her typical-American-teenaged students.

There were several actresses on the Hollywood scene in 1947 who could have played such a role well, but none of them could have epitomized the character like the one who actually got the part. CBS president William Paley himself endorsed Eve Arden for the role of Connie Brooks, and never had reason to regret his choice. The program had one of the healthiest runs of the postwar era, continuing on radio until 1957. And, it spawned an equally popular television version that served as a solid element of the CBS-TV lineup into the mid-fifties, and earned good money in syndicated reruns for twenty more years.

Arden was the key to the program’s success. It was built around her persona both on and off the screen, the woman who’s learned to expect disappointments in life and has learned to laugh at them — sardonic laughter, to be sure, even laughter tinged with a bit of bitterness – but, laughter just the same. Connie Brooks was nobody’s doormat, nobody’s dizzy little woman. She could stand up to blowhard principal Osgood Conklin, played to stack-blowing perfection by that king of stack-blowers Gale Gordon, and cut him down to size with just one or two well-placed words. She could also take in stride the peculiar ramblings of her distracted science-teacher boyfriend Mr. Boynton, as played by not-yet-a-movie-star Jeff Chandler. And, she could offer students Walter Denton or Stretch Snodgrass or Harriet Conklin helpful advice and sincere encouragement as they coped with yet another Typical Teenage Entanglement.

Between the sensitive performances by its cast, and its clever scripts, Our Miss Brooks was always a cut above the other radio programs that emphasized teenage antics. The Henry Aldriches, and the Archie Andrewses, and the Date With Judys usually portrayed teachers as adversaries out to load the poor kids down with homework, or flunk them out of class on the eve of the big game, or to stand in the corner of the gym with their arms folded on prom night daring anyone to have a good time. Arden’s portrayal of Miss Brooks stands as one of the best-rounded characterizations to come out of radio situation comedy — honest and dignified, and yet always very funny. Small wonder that Eve Arden was recognized as a key figure in helping to humanize the portrayal of educators in the mass media. For this, she was awarded an honorary life membership in the National Education Association.

When Our Miss Brooks had run its course, Eve Arden still had work to do. She briefly headlined her own Eve Arden Show. In the 1960’s, she spent two years co-starring with Kaye Ballard in the riotous Desi Arnaz-produced TV sitcom The Mothers-In-Law, which took every aspect of her established persona and ramped it up by a factor of twelve. She made triumphant returns to Broadway in Hello, Dolly and Auntie Mame, showing she hadn’t lost a step. And, in the 1970’s she took on a role that offered a sly nod to her definitive characterization of Miss Brooks. In the 1978 hit film musical Grease, and in its 1982 sequel, she appeared as Rydell High School’s principal. This time, she was not a teacher. This time, at long last, Eve Arden was in charge. It was a satirical performance, with none of the depth or nuance she brought to her portrayal of Connie Brooks. Instead, Arden performed the role as, essentially, a drag parody of Osgood Conklin – but, she threw herself whole-souled into the part and was clearly having the time of her life.

Eve Arden died in 1990 after a long battle with cancer, but her always-entertaining performances and her no-nonsense persona have made her a favorite to new generations of fans. The survival of most of the run of Our Miss Brooks ensures that future generations will get to know one of radio’s leading leading ladies.