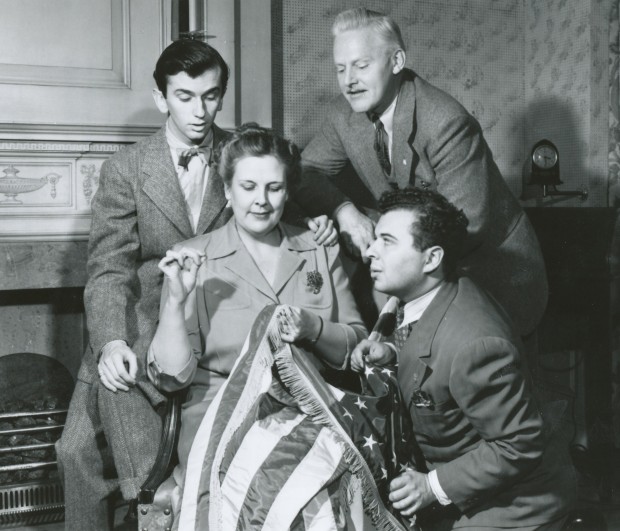 Comedy was king during the Golden Age of Radio; funsters like Jack Benny, Bob Hope, Edgar Bergen (and Charlie McCarthy), and Fibber McGee & Molly (Jim and Marian Jordan) frequently saw their programs ruling the roost when it came to listenership ratings.  There was a situation comedy that often joined this heady company of mirthmakers—an unassuming little series that focused on the trials and tribulations of an average teenage boy.  The program also featured one of the medium’s most memorable openings: a female voice calling out “Hen-reeeeeeeee!  Henry Aldrich!”

“Coming, Mother!” was the response, from the cracked voice of a kid who still seemed to be struggling with puberty.  It’s The Aldrich Family, which premiered over NBC on this date in 1939 and became one of radio’s most endearing comedies.

Clifford Goldsmith is the individual responsible for breathing life into The Aldrich Family.  The struggling playwright would finally enjoy success when his play What a Life! premiered at New York’s Biltmore Theatre in April of 1937, where it ran for 538 consecutive performances.  The production introduced audiences to “Henry Aldrich,” a troubled teenager who spent so much time in his high school superintendent’s office he was thinking about subletting.  Henry would be the breakthrough role for a young actor named Ezra Stone—and he had stiff competition, since producer George Abbott was seriously considering Eddie Bracken for the part.  What cinched Stone’s hiring was his mimicry of a former schoolmate whose voice had a tendency to crack whenever he found himself in a stressful situation.  (Bracken did get a consolation prize when he played Henry’s sidekick “Dizzy” Stevens in the 1940 film Life with Henry, based on Goldsmith’s characters.)

Rudy Vallee enjoyed What a Life! so much that he asked Goldsmith to pen a series of eight-to-ten minute sketches featuring his characters for Vallee’s popular The Royal Gelatin Hour.  Kate Smith followed suit by featuring Ezra and actors from the stage play in similar playlets on her program for 39 weeks during the 1938-39 season.  Kate then persuaded General Foods to present The Aldrich Family in full half-hour form as a summer replacement for Jack Benny, and the show executed this assignment with such effortless aplomb that it received a promotion to full-time status that fall.

The appeal of The Aldrich Family was in its disarming simplicity.  Henry Aldrich was a well-meaning teenager with a knack for turning everything he touched to catastrophe.  Henry could conceivably turn a simple trip to the grocery store in his hometown of Centerville into a situation involving the police, the fire department…and the National Guard, if he worked it right.  He never acted out of malice or mischief, he was just helpless when events began to snowball out of control.  Fortunately for our hapless hero, the “troubles of Henry Aldrich” were reliably ironed out by the final Jell-O commercial.

The cast of The Aldrich Family was one of the most stable in radio.  House Jameson played Henry’s father (attorney Sam Aldrich) for so long that listeners tend to forget it was Clyde Fillmore who originated the part in early broadcasts (with Tom Shirley as Sam in the series’ later run).  The same went for the actress who emoted as Henry’s mother—Leah Penman was the original Alice, and Regina Wallace finished out the series…but it’s Katherine Raht who played Mrs. A the longest.  Even Jackie Kelk, who portrayed Henry’s best friend Homer Brown, almost went the distance (he was playing both Homer and Jimmy Olsen on The Adventures of Superman at the same time) before being replaced in the series’ final radio season by John Fiedler, Jack Grimes and Michael O’Day.

While Ezra Stone may have been born to play Henry, his stint as the perpetually-in-hot-water teen was interrupted in 1942 due to military obligations. Norman Tokar, Dick Jones, and Raymond Ives filled in for Stone until Ezra was able to return to the program in November of 1945.  Bobby Ellis inherited the part of Henry in the radio version’s last season on radio…which makes sense, since he was playing the part on TV as well.

The Aldrich Family made a successful transition to the small screen in October of 1949, where it ran for four seasons.  Although many members of the radio cast reprised their roles (notably Jameson and Kelk), Ezra Stone was conspicuously absent.  Ezra was unsurpassed as radio’s Henry…but visually, he simply didn’t look the part.  Jackie Kelk in later years mused that he looked more like Henry than Stone did: “Ezra was this little fat man who wore a vest and smoked cigars.”  Stone elected to work behind the camera, directing many episodes of The Aldrich Family. In later years, he would go on to direct episodes of such TV series as I Married Joan and The Munsters.

The same rules had been applied previously when the Aldriches made their presence felt on the silver screen: Jackie Cooper played Henry when What a Life! was adapted for a feature film in 1939, and he reprised the role in a sequel the following year, Life with Henry (1940).  The movies’ best-known Henry Aldrich was James Lydon, who began his misadventures in a series of B-comedies for Paramount beginning with Henry Aldrich for President in 1941 and concluding with Henry Aldrich’s Little Secret in 1944.  The Paramount films managed to capture the spirit of the radio show quite well, though they did throw in a bit of physical comedy to suit the visual medium.

The radio version of The Aldrich Family took its final bows before the microphone on April 19, 1953.  It’s fondly remembered by many old-time radio fans…though I’ve had more than a few people tell me it doesn’t hold up well, calling it “corny” and “too sentimental.”  Feh! says I.  I enjoy listening to the program, which reminds us all how painful and awkward adolescence could be.  It brings you back to a time when your biggest worry was whether or not you could afford tickets to the high school dance…or more importantly, whether you had a suitable tux to wear to that affair.