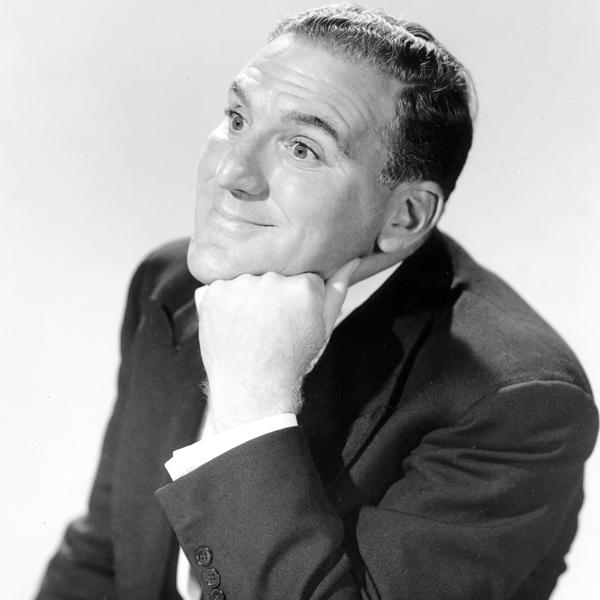 Living The Life of Riley

If there’s a single phrase which might describe the basic concept underlying the standard family situation comedy, it’s “Daddy’s a dope, but we love him anyway.” It’s a formula that’s been manipulated and twisted this way and that over the past several decades, but the befuddled, exasperated father remains a familiar stock character. He’s turned up in every possible guise, but perhaps no one ever embodied the role with greater purity than William Bendix as Chester A. Riley — a performance that set the standard for endless future generations of lovable, bungling Dopey Dads.

Family comedies were nothing new when The Life of Riley came to radio in 1943 — Depression-era listeners could identify with the humorous predicaments found in such family comedies as Mr. and Mrs., Raising Junior, and The Jenkins Family. And, by the end of the 1930’s, The Aldrich Family brought this early phase of the domestic sitcom to its ultimate level of development — setting another standard that is with us yet: the comfortably-middle-class small-town/suburban household and its friends and neighbors. But these early family programs tended to depict the father figure as a wise, level-headed provider — dizzy wives and obstreperous offspring would most often drive the comic elements of the story. Sam Aldrich was a lawyer, a respected, responsible leader in the community, and son Henry was bound to listen when his dad told him what was what.

But, not all sitcom husbands were Sam Aldriches. Throughout the 1930’s, moviegoers snickered at The Average Man, a series of comedy shorts produced by RKO, starring slow-burning character comic Edgar Kennedy as a blundering, frustrated father undermined at every turn by his unsympathetic wife, her no-account brother, and his poisonous mother-in-law. Each episode of The Average Man would end with Kennedy in a sputtering, impotent rage over whatever indignities would had been visited upon him. It was a much more corrosive vision of family life than was commonly featured on radio – but, times and styles were changing.

Irving Brecher was a writer who didn’t skew toward the warm and fuzzy. He’d contributed to several of the Marx Brothers’ films near the end of their career at Metro-Goldwyn-Mayer and became close friends with Groucho, sharing the master’s off-center comic sensibility. A New Yorker by birth and by attitude, Brecher was known for a snappy, cynical sense of humor that fit in well with the brassy mood of wartime America. His first work in radio found him providing gags for Milton Berle, a comic who liked his laughs broad and fast, and when Brecher set to work on a series of his own, he continued in that manner — devising a comedy series for his friend Groucho that would stand as a caustic parody of the situation comedy formula. Entitled The Flotsam Family, with Groucho as the wisecracking-but-overwhelmed patriarch of a typical American brood, an audition of the new series made the agency rounds in 1943, but found no takers. Marx had proven decidedly unsuccessful in past radio ventures, and no sponsor was willing to take a chance on backing him as a sitcom dad.

But Brecher didn’t abandon the idea, and he didn’t have to look far for a new star with a ready-made persona — the typical, hard-nosed Brooklyn mug, as played to perfection by beefy, rubber-faced actor William Bendix. Within a few years of his arrival in Hollywood, Bendix had cornered the market on lovable-lug roles, headlining his own comedy series for Hal Roach and appearing as a supporting actor in film after wartime film, typically as a thick-necked GI from Canarsie who, as he took a fatal bullet to save the life of his best pal, wondered out loud how the Dodgers were doing. He was ripe for radio, and his familiar screen personality fit, with a few simple adjustments, into Brecher’s sitcom idea. The Marx-ish overtones of Flotsam Family disappeared, replaced by the hearty Irish-American-Brooklynite characterization of Chester A. Riley, a well-meaning blue-collar Average Joe Punchclock who always seemed to be one step behind the rest of his family.

As developed by Brecher, the retitled The Life of Riley was carefully attuned to the mood of wartime America. Riley wasn’t just a factory hand — he was a war worker, moved west from his native Flatbush to take a job in an aircraft plant outside Los Angeles, reflecting the unexpected relocations that affected many families during the war years. He wasn’t an educated man, wasn’t a man of polished social graces, wasn’t any sort of paradigm — but Riley was a decent man, a man who believed in his country, loved his family, and stood by his word. His main flaw was that, sometimes, he was just too enthusiastic, too ready to hurl himself into some project or venture that might better his lot, and his family’s lot — but which, all too often, blew up in his face. Get-rich-quick schemes, harebrained inventions, social gaffes — Riley was well acquainted with all of them, and when his plans inevitably came crashing down, he could be counted upon to shake his head and groan out his indelible catch phrase, a perfect audio equivalent of Edgar Kennedy’s “slow burn”: “What a revoltin’ development this is!”

Every sitcom dad needs a sitcom family, and Riley had the standard-issue Wife and Two Kids. His better half, Peg, was perfectly captured by veteran radio actress Paula Winslowe as an exasperated, often put-upon woman who was long accustomed to making the best of bad situations — but who, in the end, always understood that no matter how oafish or blundering her husband might be, he always had the best interests of his family at heart. And that sincerity would cover a multitude of social gaucheries and exploded schemes. Kids Babs and Junior were less-clearly delineated, being typical pop-culture teenagers of the moment, somewhat down-market cousins of the likes of Marjorie and Leroy on The Great Gildersleeve or other such characters, but they filled their role well as frequent motivators of the weekly plots, and little more was required of them.

The really meaty supporting roles belonged to able dialectician John Brown, a fixture on radio since the mid-1930’s. First making a name for himself as a staple of Fred Allen’s stock company until his 1943 move to Hollywood, Brown’s brittle Brooklyn-wisenheimer characterization, most recently featured as the peevish “John Doe,” an early resident of “Allen’s Alley,” was perfectly suited for Riley’s best friend, neighbor, co-worker, and frequent manipulator, Jim Gillis. It was Gillis who often came up with the schemes that landed Riley in the soup, and it was his flat, honking insouciance that invariably convinced Riley that everything was under control when it was anything but.

Brown’s greatest contribution to The Life Of Riley, however, was one of radio’s most memorable, most outlandish characters. Imagine Raymond Your Host from Inner Sanctum Mysteries opening up a shop in a pleasant California suburb, and you have the crepe-draped extravagance that was “Digby ‘Digger’ O’Dell, The Friendly Undertaker.” Digger was one of many one-joke, catchphrase-driven comedy characters turning up in mid-forties radio. Played by anyone but Brown, he might have grown stale fast. But the oleaginous joviality given the character by Brown’s overripe baritone voice made him an enduring favorite. No matter how often he greeted Riley with “You’re looking fine — very naaaaaatural,” the audience roared with appreciation. Digger became a sounding-board for Riley’s schemes, always ready to offer encouragement and advice, no matter how outrageously morbid. So prevalent became the character that an entire generation of men named O’Dell would be stuck with the nickname “Digger.”

Of course, no sitcom family would be complete without a meddling, mooching relative, and The Life Of Riley gave us one of the best in Uncle Baxter, played to unctuous perfection by Hans Conried, who parlayed a long-ago donation of a pint of blood to Riley into a lifetime of free room, board, and anything else he might fancy. Some of Riley’s most “revolting developments” came about as a result of Baxter’s flamboyant whims, and Riley’s efforts to put his uncle, at last, in his place.

Together these ingredients made for an enduring formula — a healthy seven-year run on radio, an ultimately-successful transition to television, and even a feature film. And, as was quickly discovered when an attempt was made to cast Jackie Gleason as Riley in the first season of the TV series, the real success of the program rested on the brawny shoulders of William Bendix. As long as he lived, Bendix, would be typecast as a Riley-ish figure, and by all accounts he was — as Riley himself would have been — perfectly content with that.

Today, the Goofy Dad is still very much with us, but taken to extremes beyond anything imaginable in the radio era. Today, sitcom fathers blunder and fumble in ways that would have made Riley himself shake his head with dismay. The earnest, well-meaning, but overeager factory worker of 1944 has been supplanted by a new kind of sitcom dad, an infantile, incompetent man-child in a baggy t-shirt and puffy sneakers, utterly helpless in the face of his smirking, snarking wife and offspring. And what a revoltin’ development that is.