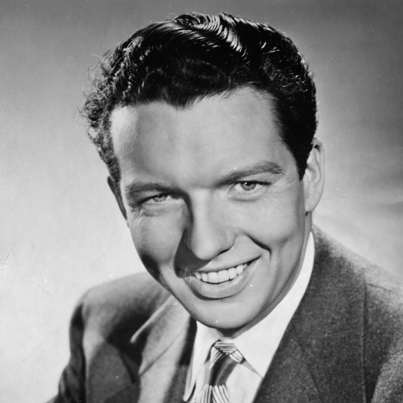 Let George Do It: The Detective With A Difference

When you think of the typical “1940’s noir private eye,” certain images come to mind — the rain-shrouded streets; the shabby trenchcoat; the baggy suit with the shoulder holster strapped under the vest; the fedora pulled low over the eyes; the cigarette clenched tightly in a rock-like jaw; the snappy, cynical wisecracks; and the astounding ability to absorb physical punishment. Radio in the latter half of the forties took full advantage of that stock figure, with an explosion of crime and mystery programs presenting every possible variation on the theme. But even with those variations, the assembly-line nature of the broadcast medium meant a certain sameness in the basic outline was unavoidable. Listeners expected a private eye to sound like a private eye, to act like a private eye, and in their mental image to look like a private eye – so, most of them, in fact, did.

When Let George Do It began in 1946, it wasn’t even, strictly speaking, a detective program. In his earliest incarnation, he was a sort of nebulous freelance troubleshooter, a freshly-demobilized war veteran looking for something interesting to do with his life. His stories were as much about the people who hired him as they were about George himself, and he fit into the tales as a sort of bemused outsider called in to somehow restore order to messes he didn’t create — resulting in stories that bordered as much on light comedy as they did crime drama. The formula was simple: George’s gimmick was a newspaper ad, running in the “Personals” section of the classified columns, offering his services to anyone who needed help for any problem. His early cases were as likely to involve him in screwball romances or family dramas as they were in hard-boiled crime, and he took them all in stride, with a wry, ironic bemusement that set him apart from the rest of his gumshoed contemporaries.

But the mid-forties being the mid-forties, it wasn’t long before George began to focus more and more on darker doings. By the end of the program’s first season, he’d gotten well acquainted with murder, jewel smuggling, blackmail, and all the rest of the criminal spectrum. At this point, it would have been all too easy to allow him to devolve into just another her-spine-was-as-cold-as-the-ice-cubes-in-my-scotch Philip Marlowe clone, but the program’s staff resisted that temptation just enough to keep George’s unique personality in focus. George Valentine didn’t relish being beaten up by blackjack-wielding hoods or sparring with thick-headed cops. He preferred the scientific method of criminal investigation to the rubber-hose-to-the-side-of-the-head technique, and more often than not he was able to keep himself out of dark-alley dustups with cheap street thugs.

George wasn’t a guns-blazing man of action, at least not if he could help it. He was a thinking man, a private investigator who preferred to focus on investigating, and in that he had a lot in common with a radio detective of later vintage, one Johnny Dollar. The similarities, of course, are well founded, since both characters were brought to the finest realization by one man — the gifted radio actor Bob Bailey.

Born in Ohio in 1913 to a theatrical family, Bailey had drifted into radio in the last years before World War II, settling in Chicago, one of broadcasting’s busiest incubators of new talent. There he made the rounds of the studios, catching parts here and there on soap operas and dramatic anthologies, and building a resume. In 1943, he made his way to Hollywood where he impressed the talent scouts at Twentieth Century Fox enough to earn an acting contract.

Truth be told, Bob Bailey wasn’t much of a movie actor. He also wasn’t very big — five-foot-nine and rather skinny — in an era that preferred its he-men to be tall, dark, and handsome. He’d never make the grade as a leading man, and wasn’t eccentric enough to really find a niche on screen in character roles. But it was wartime, actors were in demand, and he puttered away in roles in various minor features, ranging from Laurel and Hardy comedies to assorted romance and action tales, until the studio dropped him in 1945. With nothing else on the horizon, he found his way back into radio, just as Hollywood-based radio drama was moving into its most prolific era. His voice, shifting smoothly from light to heavy as the situation demanded, was perfect for George Valentine — a world-weary everyman doing his best to help whoever he can help, however he can help them, and expecting little in return but their gratitude and a check to cover his expenses.

Bailey’s consistent performance made the show for the next nine years, but he had plenty of help from the supporting cast. Just about every stalwart of Hollywood AFRA turned up on the program at one time or another, people like William Conrad, Harry Bartell, Virginia Gregg, John Dehner, Paul Frees, Peggy Webber, Howard McNear, Herb Butterfield, Jeanette Nolan, Luis Van Rooten, Jack Kruschen, and on and on. Many of these performers went on to form the nucleus of the CBS-Hollywood stock company a few years later, making outstanding contributions to radio drama throughout the 1950’s. But the performers who mattered most were the small group of regulars who formed George Valentine’s immediate circle of friends and associates: Frances Robinson as his secretary/love interest Claire Brooks; Eddie Firestone Jr. as “Brooksie’s” brother Sonny; Joe Kearns as Caleb, the crusty old building superintendent who served as one of George’s reliable confidants; and, Wally Maher as Lieutenant Riley, the inevitable police-department liaison with a heart of gold. This cast managed to create an intimate family feeling over the first few seasons of the program’s run, which managed to endure through subsequent cast changes and the program’s gradual evolution in tone from a comedy-drama with a tinge of the anthology about it to a more or less straight crime drama with flashes of occasional wit.

The most drastic change, however, came in 1954, when Bob Bailey left the series to take on the role for which he is most remembered: Johnny Dollar, the insurance investigator with the action-packed expense account. His replacement was another veteran of Chicago radio, the versatile Olan Soule. Although Soule was a fine actor by any standard, his George Valentine somehow lacked the weary edge of Bailey’s characterization. The series had run its course by then, like much of radio itself, and it quietly expired that September.

Bob Bailey went on to spend five years as the star of Yours Truly, Johnny Dollar, where he cemented a reputation for himself as one of radio’s most subtle leading men. His Johnny Dollar was, in many ways, an expansion and enlargement of George Valentine, still the world-weary cynic on the surface who sincerely means to do the best he can for the people who need his help…and who would prefer not to get knocked around by brass knuckles along the way. When CBS began winding down its radio drama operations in Hollywood in 1959, Bailey declined to move east, and his acting career fizzled out. He remained an enigma to many who knew him, and to many who admired his work, right up to his death in 1983. All that truly remains to know the man by are his performances — which yet endure as some of radio’s finest — never pretentious or showy, but smart and spare and honest, just like the characters he played.

Let George Do It never had the national reputation of other detective thrillers — its entire original run took place on the West Coast, in the area served by its sponsor, the Standard Oil Company of California, and while syndicated reruns found their way into some markets outside this sales area during the early 1950’s, the program remained largely unknown to listeners in the East and Midwest. Its rediscovery in the 1970’s by old time radio enthusiasts, and its burgeoning popularity in the years since, have brought new life to one of postwar radio’s most enjoyable programs.