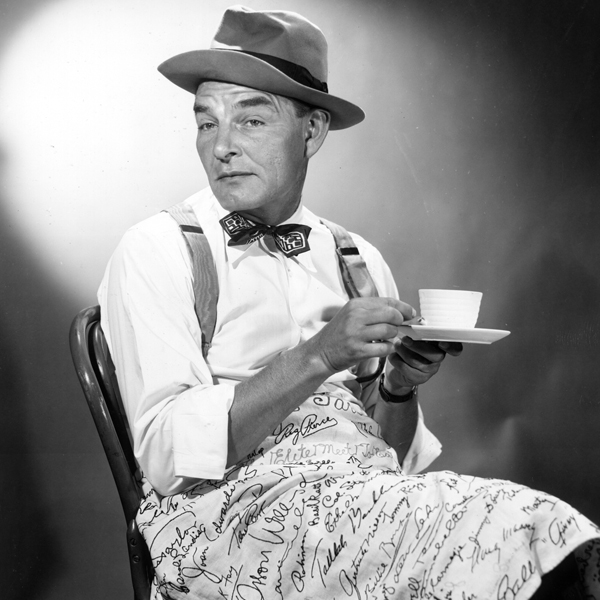 Leave Us Not Forget This Anniversary

In 1941 radio audiences made their first visit to a dingy, dank East Side watering hole affectionately known as Duffy’s Tavern.  The half-hour sitcom, created by and starring Ed Gardner, would become show business’ most famous “place where everybody knows your name” until the television show Cheers premiered some forty years later…and in one of those interesting Lone Ranger/Green Hornet-type back stories, the co-creator of that landmark TV comedy, James Burrows, was the son of Abe Burrows…who was at one time the head writer for Duffy’s.

March 1, 1941 marked the official debut of the show that would soon become one of radio’s most popular comedies—but the origins of the show stretch back as far as 1938, when Gardner created a lovable Manhattan barkeep named “Archie” for an obscure CBS radio series, This is New York.  Gardner, who had been directing, writing and producing various programs at that time (working alongside the likes of Burns & Allen, Bing Crosby and Al Jolson), was frustrated in his efforts to find an actor who could “talk like a bartender.”  Demonstrating how he thought the part should be played, he suddenly realized that he was the right person to interpret the character…and Ed’s career in front of the mike began.

After a tryout on the CBS series Forecast in 1940, Duffy’s Tavern landed a spot on the network’s regular schedule sponsored briefly by Schick razors (and then General Foods, chiefly Sanka).  The weekly shenanigans (well, it was an Irish pub) took place at a Manhattan dive located on Third Avenue at Twenty-Third Street.  The owner of the establishment was Patrick J. Duffy—but he rarely ventured inside his own tavern, preferring to keep tabs on its operation via telephone.  In fact, that’s how the program opened every week (to the strains of When Irish Eyes are Smiling)—with Gardner’s “Archie the manager” answering a ringing phone with “Duffy’s Tavern, where the elite meet to eat—Archie the manager speakin’, Duffy ain’t here…oh, hello Duffy…”  Duffy did have a pair of eyes and ears at the bar in the person of his daughter Miss Duffy, a man-chasing spinster originally played on the program by Ed’s real-life spouse—future Academy Award-winner and TV domestic Shirley “Hazel” Booth.  (Booth left the show in June of 1943, and Gardner spent the rest of the show’s run trying to find a suitable replacement.  He was never really satisfied with the long line of actresses who took on the Miss Duffy role, though some of radio’s best known female thespians had their shot: Florence Halop, Sara Berner, Sandra Gould and Doris Singleton, to name a few.)

The other denizens who frequented Duffy’s included Clifton Finnegan (whose moniker was a play on the erudite host of Information Please, Clifton Fadiman), played by professional radio second banana Charlie Cantor; and Officer Clancy, the cop on the beat, who was voiced by Alan Reed in his pre-Flintstones days.  Gardner’s Archie also had a wisecracking waiter in Eddie Green, an underrated comedian whose death in 1950 necessitated a replacement in pianist Ed “Fats” Pichon.  Somehow, a plethora of big-name stars stumbled into the quaint little bistro every week, including the likes of Humphrey Bogart, James Cagney, Marlene Dietrich and Cary Grant, among others.  It was considered by many celebrities a badge of honor to allow themselves to be invited (and insulted) by Gardner’s malaprop-prone bartender.

Duffy’s Tavern aired on CBS until the fall of 1942, when it moved to NBC’s Blue network…and began its long association with Bristol-Myers (Ipana toothpaste, Sal Hepatica, etc.).  It then found a home on NBC in 1944 until the end of its run in December of 1951…even after Gardner, who always made the program’s “bottom line” Job One, moved the show to Puerto Rico in 1949 to take advantage of that country’s favorable tax laws.  At the height of the show’s popularity, Gardner, Cantor and Green appeared with an all-star cast in a 1945 feature film version of the show which, since it was produced at Paramount, had the benefit of featuring major stars like Bing Crosby, Alan Ladd and Dorothy Lamour.  (Sadly, this did not prevent the movie from being a critical and box-office flop.)

A TV version of Duffy’s Tavern debuted on the small screen in 1954 with little success; the only two performers who transitioned to that program were star Gardner and Alan Reed—and Reed played the part of Clifton Finnegan instead of his familiar Irish cop.  Though the doors to the tavern closed after that, some broadcasts of the program have survived to reveal that, at the peak of its powers, Duffy’s was a first-rate radio comedy.