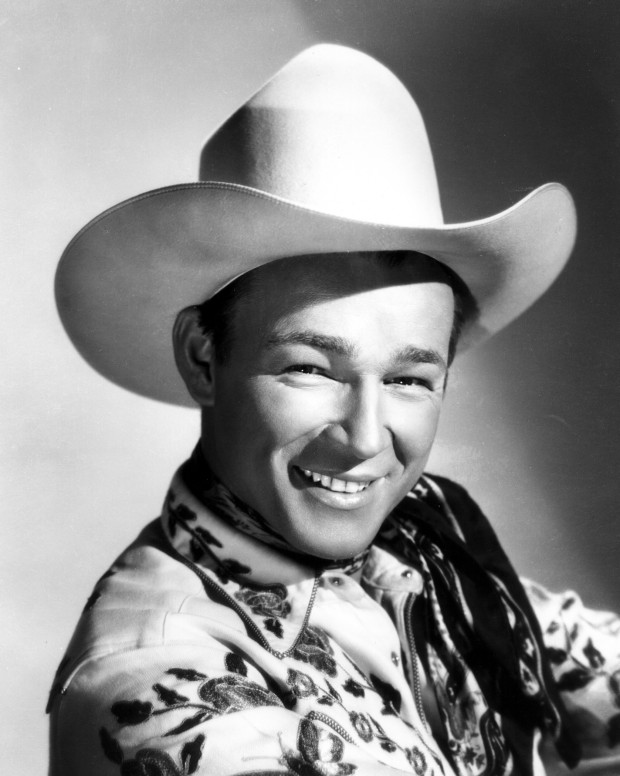 “America’s favorite singing cowboy,” Gene Autry, began his long-running radio series Gene Autry’s Melody Ranch in January of 1940.  It was fitting that the man who began his lengthy motion picture career in 1934 with In Old Santa Fe would launch an on-the-air vehicle for his sagebrush talents; Autry was a solid favorite of any kid who ever plopped down in a theatre seat for Saturday matinees (and more than a few “grown-up” kids, too).  It took his friendly B-Western rival, Roy Rogers, a little longer to establish himself in radio, however; even though Roy had performed before a microphone as far back as 1931 (as a member of “Uncle Tom Murray’s Hollywood Hillbillies”), the actor-singer wrestled throughout his show business career with bouts of mike fright.  That all changed on this date in 1944; the “King of the Cowboys” screwed up his courage and began broadcasting for Mutual with The Roy Rogers Show.

Born in 1911—in a section of Cincinnati, Ohio where Riverfront Stadium now stands—Roy Rogers’ eventual rise to cowboy stardom was a slow and steady one.  His family called Duck Run, OH (about twelve miles from Portsmouth) home for many years. His father purchased a little farm while still working in a shoe factory, and in between ridin’ and a-ropin’ young Roy learned to play guitar and mandolin—as well as singing in the church choir.  The Rogers family decided to move west to California in 1930, and Roy continued to pursue his musical ambitions as a sideline while working at such jobs as fruit-picking and driving trucks.

A talent contest in Inglewood, CA would be the catalyst for Roy’s eventual decision to build a show business career.   He performed with various musical aggregations before making the acquaintance of fellow musicians Bob Nolan and Tim Spencer.  This trio formed the nucleus of The Sons of the Pioneers, and that Western music group not only enjoyed chart success with tunes like Cool Water and Tumbling Tumbleweeds, they found themselves in demand whenever background music was needed for B-Westerns.  Roy Rogers slowly started to make a name for himself in features like The Big Show (1936), The Old Corral (1936), and The Old Barn Dance (1938).  All three of those movies starred Gene Autry, who unintentionally gave his future rival’s silver screen career a shot in the arm when he walked out of Republic Pictures due to a contract dispute.  Republic head Herbert J. Yates then cast Roy as the lead in Under Western Stars (1938), and his new star would go on to make 86 additional oaters for the company through 1951.

By the time The Roy Rogers Show premiered in the fall of 1944, its star was the number-one Western hero at the box office (Rogers would hold that position from 1943 to 1954—though in all fairness, he benefited from Gene Autry’s decision to enlist during WW2).  “The King of the Cowboys” would be introduced by announcer Verne Smith: “The greatest name in rubber, Goodyear, invites you to meet America’s greatest Western star, Roy Rogers!”  The Rogers show was similar to Autry’s Melody Ranch; a half-hour of homespun banter and music around the campfire (supplemented with the occasional comedic or dramatic skit) with the Sons of the Pioneers, Pat Friday, and Perry Botkin conducting “The Goodyear Orchestra.”  The Roy Rogers Show only lasted a season on Mutual; but resurfaced a year later on NBC as a Saturday night offering for Miles Laboratories.

Roy’s “Alka-Seltzer” years would bring mikeside two familiar folks from his feature films: George “Gabby” Hayes was Rogers’ faithful sidekick (Gabby brought his patented brand of comic relief to Roy’s movies beginning in 1939 with Southward Ho), and Dale Evans (a one-time female vocalist for Edgar Bergen’s program) was Roy’s love interest.  (Dale was also her co-star’s love interest when they weren’t broadcasting, by the way—the two of them would become Mr. and Mrs. King of the Cowboys on December 31, 1947…though Dale’s official title was “The Queen of the West.”)  The Roy Rogers Show would run on NBC until March of 1947.  After a hiatus, it landed a new sponsor in Quaker Oats (“The Giant of the Cereals!”) with its return on August 29, 1948 over Mutual.  By this time, The Roy Rogers Show had started to de-emphasize its earlier variety show leanings (though there was always time for a song from Roy, Dale, or Foy Willing and The Riders of the Purple Sage), and instead shone its spotlight on rootin’-tootin’ juvenile adventure (described by The Christian Science Monitor as “a little song, a little riding, a little shooting, and a girl to be saved from hazard”).  Gabby and Dale continued as Roy’s co-stars; with Hayes still spinning tall tales and Dale buying a ranch next to Roy’s famed Double-R-Bar spread.  (Gabby was replaced in the 1950-51 season by “Clackity,” an equally longwinded codger played by Horace Murphy.)

By the fall of 1951, The Roy Rogers Show had returned to NBC in yet another incarnation sponsored by Post Cereals.  (Quaker Oats was a little skittish about continuing to sign the checks due to a legal skirmish between Roy and his movie studio Republic over the Cowboy King’s decision to get into television.)  Replacing Clackity was Jonah Wilde—“the wisest trail scout of them all”—played by Forrest Lewis in genuine Gabby Hayes-like fashion.  The following season, Jonah was out and Pat Brady—an old friend of Roy’s from their Sons of the Pioneers days—was providing the show’s comic relief (a job he had performed in several of Rogers’ feature films and on TV, where he tooled around in a jeep affectionately named “Nellybelle”).  Musical numbers from Roy and Dale featured backup accompaniment from The Whippoorwills and The Mellomen.

As for Dale—she had started a career as an entrepreneur running The Eureka Hotel and Café (eat your heart out, Miss Kitty!), located in Mineral City, the center of the show’s action.  (Herb Butterfield was also a regular, as Mineral City’s sheriff.)  Roy and Dale continued their adventures for General Foods/Post until January of 1954, when Chrysler took over sponsorship to plug Dodge trucks.  The Dodge years of The Roy Rogers Show found the program’s format once again undergoing a makeover: the series adopted a mystery-thriller tone, with episodes concentrating on plot threads like diamond smugglers and a stolen stamp collection.  On July 21, 1955, The Roy Rogers Show had ridden as far as it could (a reference to the show’s opening theme, which told listeners “saddle your horse, ‘cause we’re gonna ride far”) on radio—though the TV version of The Roy Rogers Show would last until 1957 (and then it put down stakes at The Old Syndication Ranch).

Happy anniversary to The Roy Rogers Show, and till the next time we meet—“Goodbye, good luck, and may the Good Lord take a likin’ to ya!”