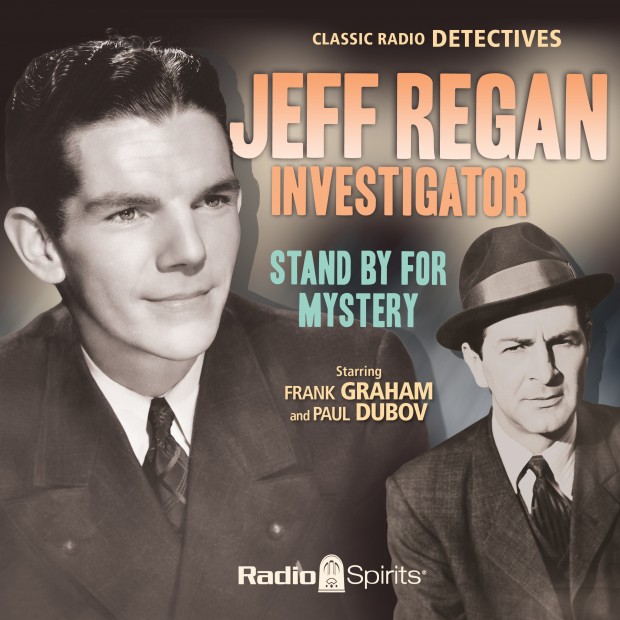 “I get ten a day and expenses…they call me the Lyon’s Eye.”

During his stint at San Francisco’s KGO in the mid-1940s, John Randolph “Jack” Webb earned his initial radio bona fides as the star of Pat Novak for Hire, a West Coast crime drama whose adherence to the hard-boiled detective tradition often bordered on delirious parody—much to the delight of listeners and fans. Webb played Novak from 1946 to 1947 before moving on to Los Angeles for a shot at bigger fame and fortune. In the summer of 1947 he retooled the Novak character as the titular investigator of Johnny Modero, Pier 23—heard over Mutual Radio from April through September of 1947.

Before Jack created the seminal police procedural Dragnet in the summer of 1949, he would take one more crack at Pat Novak…this time on a coast-to-coast version on ABC from February to June of that same year. And in between Johnny and Pat, Webb completed his gumshoe triumvirate with Jeff Regan, Investigator—a private eye program first heard over CBS Radio on this date in 1948.

Jeff Regan actually began as a secondary character on the program; the inaugural broadcast was announced in newspapers as Joe Canto, Private Eye, with the titular sleuth played by Webb’s future Dragnet co-star, Barton Yarborough. Canto and Regan were operatives with the International Detective Bureau, a small investigations firm in the City of Angels founded by disgraced lawyer Anthony J. Lyon. Lyon, portrayed by actor Wilms Herbert (who played both Sergeant Otis Ludlum and Francis the butler on Richard Diamond, Private Detective), was little more than an ambulance chaser who bestowed the lofty title on the company to give it a touch of class. Rarely did any of Lyon’s employees venture into international waters…and while the other investigators were mentioned from time to time (including Canto, who gradually receded into the background after the first episode), it often seemed as though Regan did most of the legwork. This might explain the P.I.’s disdain for his boss, though he managed to keep it together with a sardonic sense of humor.

The series allowed Webb to emote in the clipped, no-nonsense style that was rapidly becoming his radio trademark. The scripts (by Webb and E. Jack Neuman) were compelling and the direction (Gordon T. Hughes) crisp. Jeff Regan frequently featured members from the graduating class of Radio Row: Betty Lou Gerson, Hans Conried, Jeff Chandler, William Conrad, Marvin Miller, Lurene Tuttle, Herb Butterfield, Larry Dobkin and Herb Vigran were just a few who guested from time to time. (In addition to Herbert and Yarborough, actress Laurette Fillbrandt appeared on occasion as Melody, the firm’s long-suffering secretary.) Much to CBS’ dismay, however, Jack was determined to jump-start Pat Novak on ABC after Regan finished its run in December of 1948…despite the fact that Jeff Regan was in high demand with the network’s listenership.

Regan producer Sterling Tracy resurrected the series in October of 1949 for the network…though the show retreated to become a West Coast entity only. Actor Frank Graham was brought in to replace Webb; Graham was an up-and-coming vocal talent who had appeared on such programs as Lum & Abner and The Whistler, but was probably better known for his contributions to animated cartoons. He narrated and provided voices for the likes of Walt Disney, MGM, Warner Brothers and Columbia (he was the voice of the Fox and the Crow in that studio’s popular franchise).

Anthony J. Lyon was also replaced. Jack Benny Program player Frank Nelson stepped into the role, playing Lyon as a bit more buffoonish than the original Wilms Herbert incarnation, and shared a first-rate chemistry with Graham. The scripts were written by Neuman and Adrian Gendot, and later William Fifield, William Froug and Gilbert Thomas assumed the task. The work was as solid and witty as it was for the first go-around. The only problem was…Graham wasn’t Jack Webb, and the fate of the show suffered a bit from this (admittedly, Graham had huge shoes to fill). Had both Franks originated the roles of Regan and Lyon, it might have been a different story. The show’s ratings did remain respectable, and there was every expectation the program would continue.

Tragedy struck the show in September of 1950. Actor Graham, who was supplementing his Regan success as the host of the radio anthology Satan’s Waitin’ (not to mention his announcing chores and cartoon vocal duties), committed suicide on September 2nd via carbon monoxide poisoning in his garage…a photo of his then-girlfriend, Disney animator Mildred Rossi, clutched in his hand. It was a devastating end to a most promising career, and the decision was made by the network to discontinue the series as a result.