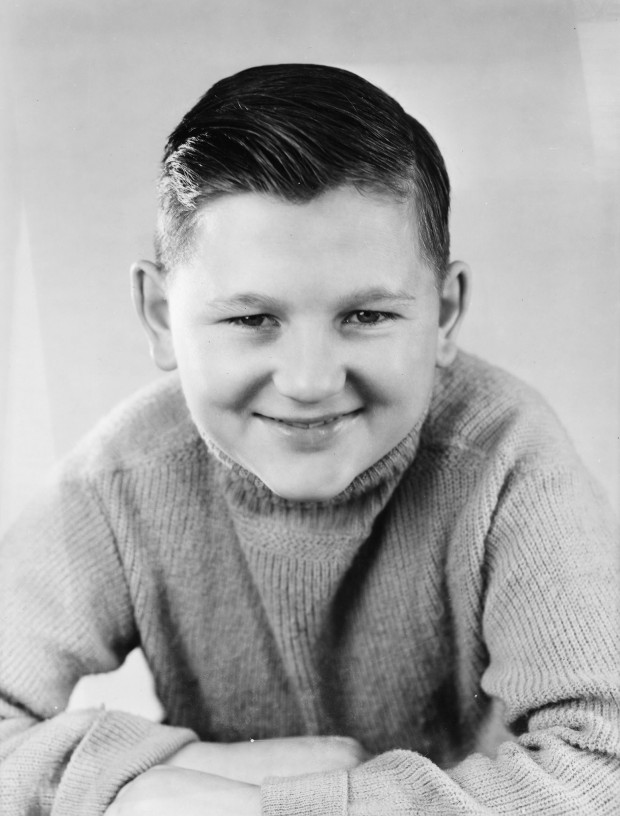 It wasn’t a drink from the legendary Fountain of Youth that kept today’s birthday celebrant seemingly young throughout his impressive show business career. A purported glandular disorder prevented Walter Campbell Tetzlaff—better known as Walter Tetley, and born in New York on this date in 1915—from undergoing normal adolescence, and thus his voice was never allowed to change. Fortunately for young Master Tetley, his voice would become his fortune as it enabled him to emote over the airwaves as America’s beloved brat. Forget what you’ve learned about Charlie McCarthy, Baby Snooks and Junior, the Mean Widdle Kid—Walter was the first and inarguably the best.

Tetley began his fledgling footlights career as a pint-sized impersonator of Scottish entertainer Sir Harry Lauder. In fact, Walter was even billed as “Wee Harry Lauder” on stage, with the personal approval of Sir Harry himself. The young actor was so good as Lauder that several people suggested to Mrs. Tetley she might want to consider auditioning him for radio…and in 1930, Walter Tetley made his debut over the airwaves on The NBC Children’s Hour (later known as Coast-to-Coast on a Bus). A long list of radio jobs followed: The Lady Next Door, Let’s Pretend, Raising Junior, The March of Time and Death Valley Days, to name just a few. In 1934, Tetley took a break from his radio routine and sailed across to our neighbor on the other side of the pond, where he became a music hall (vaudeville) sensation with his Lauder impersonation.

In 1941, Walter Tetley landed the role that would cement his old-time radio immortality. Harold Peary, who had played neighbor Throckmorton P. Gildersleeve on Fibber McGee & Molly for several years, was going to be given a spin-off in the form of The Great Gildersleeve. In this sitcom, Gildy moved from Wistful Vista to the neighboring hamlet of Springfield. There, as uncle to orphaned Marjorie (Lurene Tuttle, Louise Erickson, and Marylee Robb) and Leroy Forrester (Walter), he acted as executor of their trust and later became the town’s water commissioner. Nephew Leroy was one of radio’s most beloved incorrigibles; he was basically a good kid even though he occasionally crossed the line into juvenile delinquent mischief from time to time. Leroy was the pin necessary to puncture the balloon-like pomposity of his uncle Gildy (Leroy’s frequent exclamation was “What a character!”), and though he did give his uncle trouble he endearingly loved the man, affectionately calling him “Unk.” Tetley played the part of Leroy until the show ended its sixteen-year-run in March of 1957—even continuing to utter “For corn’s sake!” when Willard Waterman inherited the role of Gildy from Peary in the fall of 1950.

In 1947, Walter Tetley joined Richard Lane and Louise Arthur for the syndicated radio sitcom The Anderson Family, in which Tetley played son to Lane’s sourpuss patriarch. The Anderson Family ran for only a year, but in addition to his Gildersleeve gig Walter took on another radio assignment that is my personal favorite. The actor joined the cast of The Phil Harris-Alice Faye Show when it was still The Fitch Bandwagon, playing another Leroy-like wisenheimer in the form of Julius Abbruzio, the saucy delivery boy for the neighborhood grocery. In the early years of the show, the Julius character was a relatively mild irritant to star Phil Harris—“Bruzie” had quite the schoolboy crush on Alice, truth be told, and was constantly trying to convince “Miss Faye” to run away with him. By the time Phil and Alice’s show switched sponsorship to Rexall, however, Julius had become Leroy on steroids (though the two were easily differentiated by Julius’ pronounced Noo Yawk accent)—and was frequently the devilish, malevolent nemesis to Harris and his guitar-playing pal Frankie Remley (Elliott Lewis), always looking for a way to scotch the duo’s latest stumble into idiocy. (His romantic overtures to Mrs. Harris became a bit more blatant as well.) The trio of Phil, Frankie and Julius provided some of radio’s best comedy, and Tetley continued playing the role until the show signed off in 1954.

Although Walter Tetley’s voice made him a natural for radio’s juvenile roles, appearing on the big screen was a bit of a problem: his appearance was kind of at odds with his youthful-sounding voice. He never became a major player in movies (his roles consisted of mainly messengers and bellboys), but he made some memorable appearances in the flickers—I caught him two weeks ago as a chimney sweep in the 1939 film Tower of London, much to my amusement. He did a remarkable bit with Lou Costello in the Abbott & Costello feature Who Done It? (1942), as a pesky page boy who bets Lou a nickel he can drink orange juice faster than Costello can set ‘em up (keep in mind that each glass of orange juice costs Lou fifteen cents). Walter played an elevator operator in It’s in the Bag! (1945), alongside his old boss Fred Allen, that was also good for a hearty guffaw. The Powers That Be took a pass on Tetley playing Leroy in the four films RKO produced based on The Great Gildersleeve series…though Walter did have a brief bit in Gildersleeve on Broadway (1943) as a bellhop.

Walter’s major contribution to the movies was providing the voice of Andy Panda in a number of Walter Lantz-produced Universal cartoons released in the 1940s. Tetley would reprise the voice when The Woody Woodpecker Show came to television in 1957. Sadly, doing voice work for the small screen seemed to be the only outlet for Tetley’s unique talent…but you can’t say he didn’t make the most of it. Tetley voiced Sherman, pet boy of the whip-smart beagle Mr. Peabody in the “Peabody’s Improbable History” segments of Rocky and His Friends (later The Bullwinkle Show)—which is where I first became familiar with Walter before discovering my obsession with old-time radio. Tetley later emoted on a 1972 animated Yuletide special, A Christmas Story, and worked briefly on The Hollywood Radio Theatre (produced by his former Harris-Faye colleague Elliott Lewis) before succumbing to stomach cancer at the age of sixty in 1975.