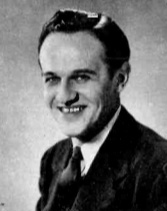 The actor born Victor Herbert Erpelding in Chicago, Illinois in 1908 put his hobby of collecting rare, tropical birds to good use in his brief but prolific radio career. Wilms Herbert soon learned to mimic the sounds emanating from the occupants of his blossoming aviary, and in studying his fine-feathered friends while visiting zoos he added other animal “impressions” to his repertoire. “When a radio producer in Chicago needs a mad cockatoo, a pink elephant, an overworked and complaining horse, or an alligator noise,” noted Radio Life in December 1946, “his automatic choice for an authentic portrayal is Wilms Herbert.” Wilms could facetiously be called “the Mel Blanc of the daytime drama set”; for example, on the radio soap Tena and Tim, he not only played “Mr. Hutchinson” but gave voice to two parrots, “Mavoureen” and “Henry VIII.” (I’ll wager that Herbert didn’t get as many laughs as Mel, however.)

Wilms Herbert was a late bloomer when it came to radio acting. It’s not that he was a stranger to performing; Wilms developed a love for the craft while attending Lake View High School in his youth, with summers devoted to Chautauqua and Toby shows. In addition to honing his acting skills, Herbert perfected his singing and dancing. Wanderlust took Wilms to Hollywood in the 1930s, where he ran a dance studio and sang with both the Los Angeles Opera Company and the Civic Light Opera Company. For a time, Herbert wrote dance reviews for The Los Angeles Daily News.

Wilms Herbert eventually returned to Chicago (with a brief stopover in Milwaukee, Wisconsin, where he was a stage director for Milwaukee Opera) and worked in stage and opera productions. In 1942, he landed the part of “Keith Armour” on the “washboard weepie” Lonely Women, a role he would later reprise on Today’s Children. Wilms could also be heard on The Guiding Light (as Ted White and later Keith), Judy and Jane (as Jerry), and Ma Perkins (as Mr. Garrett). During his broadcasting days in the Windy City, Herbert narrated Tales of the Foreign Service, an offshoot of NBC’s University of the Air. Other Chicago-based series on which Wilms worked include Author’s Playhouse, The Crime Files of Flammond, First Line, Freedom of Opportunity, Grand Hotel, Hymns of All Churches, Lights Out, Smilin’ Ed’s Buster Brown Gang, Those Websters, We Came This Way, and World’s Great Novels/World’s Greatest Novels.

Wilms Herbert would make a triumphant return to Tinsel Town in September of 1946 when he followed Today’s Children, which relocated its production to Hollywood. If Wilms thought he was busy in Chicago as a radio performer, he was positively swamped during his stint on the West Coast. Herbert was an early member of Norman Macdonnell’s “stock company,” working with the director-producer on such programs as The Adventures of Philip Marlowe, Romance, Suspense, and Yours Truly, Johnny Dollar. During the eight-week summer run of Escape in 1948, Wilms joined that elite coterie of hosts (which included William Conrad, Paul Frees, and Lou Krugman) who asked listeners: “Tired of the everyday grind…?”

From July 10 to September 18, 1948, Wilms Herbert played “Anthony J. Lyon,” the wily and parsimonious boss of the titular shamus (Jack Webb) on Jeff Regan, Investigator. Herbert also played numerous roles on that show during the Frank Graham years. Wilms’ best-remembered radio work was on Richard Diamond, Private Detective; he played Sergeant Otis Ludlum, a thick-as-a-plank uniformed cop who clearly had a relative looking out for him at City Hall. The actor doubled as Francis, devoted butler to Diamond’s socialite girlfriend Helen Asher. Francis had an uncanny knack for killing the romantic mood by walking in as Diamond and Helen were getting down to business, if you get what I mean. Richard Diamond, Private Detective constituted Herbert’s final radio performance (he passed away on March 5, 1951 at the age of 42…with his pre-recorded Diamond episode airing four days after) although he could still be heard on the program in the summer of 1953 (which were rebroadcasts from 1950 and 1951).