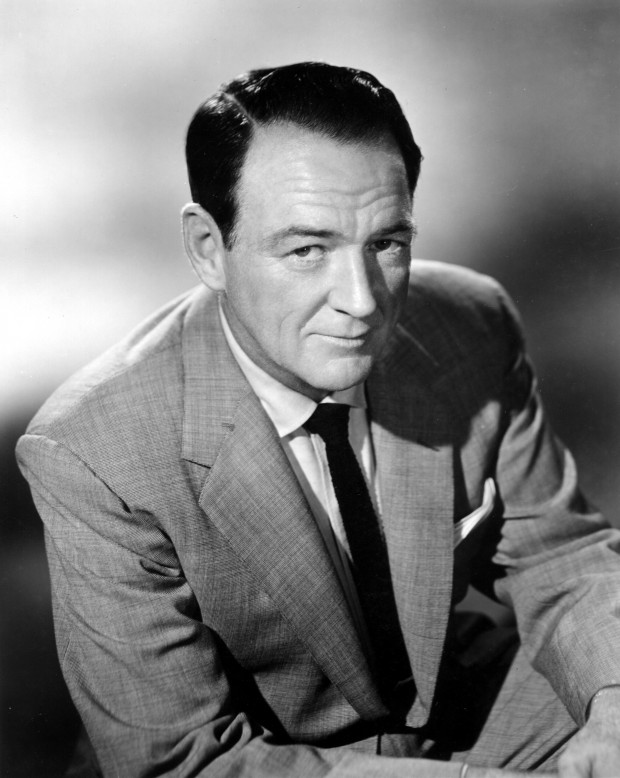 In 1940, actor William Gargan—born in Brooklyn, NY in 1905—received appreciative tribute from his peers when he was nominated for a Best Supporting Actor Oscar for his portrayal as a young foreman in the 1940 tearjerker They Knew What They Wanted.  Sadly, he didn’t win (he lost to The Westerner’s Walter Brennan)—but you know the old cliché: “It’s great just to be nominated.”  It was also great to possess a sensational career like the one Bill Gargan enjoyed on stage and in movies, TV…and of course, radio.

While attending high school at Brooklyn’s St. James School, Bill held down a number of jobs—from soda jerk to street car conductor.  After graduation, he advanced to more prestigious white-collar work.  Gargan was employed for a time as a credit investigator, and later as a collection agent for a clothier.  He nearly took a bullet for his trouble one day when a disgruntled customer (who was quite delinquent in his account) fired a shot at him.  His eventual career, however, came about while visiting his brother Edward during Ed’s participation in a musical comedy production on stage.  Bill landed a performing job himself, making his debut in Aloma on the South Seas in 1925.

Brother Edward was three years older than William…yet both brothers were born on the same date, July 17th.  Ed would later become a familiar face in the movies himself, with both Gargans working together in such films as The Devil’s Party (1938), Miss Annie Rooney (1942), and Follow That Woman (1945).  Though he was grateful to his older sibling for the opportunity to get into acting, Bill hedged his bets slightly; he served as a whiskey supplier (or bootlegger, to use the common nomenclature) for various New York speakeasies as he passed the time between acting gigs.

Gargan’s big break came when he received rave notices for his work in the 1932 production of Philip Barry’s The Animal Kingdom.  He would reprise his role as Richard “Red” Regan in the silver screen version released later that year…though it wasn’t the first time he’d worked in front of a motion picture camera.  He had played bit parts in previous movies and was in the cast of such films as Rain (1932) and The Sport Parade (1932).  It was, however, the start of a prolific period that included such classics as Sweepings (1933), The Story of Temple Drake (1933), Headline Shooter (1933), Four Frightened People (1934), Black Fury (1935), The Milky Way (1936), and You Only Live Twice (1937).

William Gargan’s Academy Award nomination for They Knew What They Wanted opened up a lot of acting opportunities, since (despite working on some high-profile films) many of his onscreen appearances were in second features, or “B-films.”  Still, Bill got good parts in the cinema of the 1940s; his celluloid resume included I Wake Up Screaming (1941), Cheers for Miss Bishop (1941), The Canterville Ghost (1944), The Bells of St. Mary’s (1945), and Till the End of Time (1946).  Gargan appeared with Bud Abbott & Lou Costello in two of their vehicles, Keep ‘Em Flying (1941) and Who Done It? (1942).  In addition, he was seen in one of my particular favorites — an offbeat little programmer from Republic Pictures entitled Strange Impersonation (1946; one of director Anthony Mann’s early efforts).  The actor also took over for Ralph Bellamy as famed sleuth Ellery Queen in the last three Queen movies released by Columbia in 1942.  That franchise came to a halt because Gargan wasn’t under contract to the studio…or any studio, for that matter.

Throughout his years on the silver screen, Bill Gargan played a variety of different roles in different movies.  He was, however, quite reliable when it came to portraying policemen and detectives—and there was an antecedent for that.  Before his stage career, Gargan had actually been employed as a private detective for a New York agency—pulling down a salary that was commensurate with the fictional Jeff Regan, Investigator ($10 a day, plus expenses).  Bill was sacked when a diamond salesman he had been hired to protect got away from him.

His gumshoe experiences in real life certainly added credence to his future radio portrayal of a private detective.  Gargan’s first sleuthing job over the ether was playing Inspector Burke on ABC Radio’s Murder Will Out beginning in mid-1945 (taking over for Edmund MacDonald).  This quiz program had a format similar to that of Ellery Queen: a mystery was performed before a studio audience and then four panelists (plucked from the same audience) had to correctly guess the conclusion.  Bill appeared on Murder until the show’s cancellation in June of 1946…while at the same headlining I Deal in Crime, another ABC series that cast him as shamus Ross Dolan.  Dolan, a veteran P.I., had taken a breather during the war to serve in what he jovially called “Uncle Sugar’s Navy”…but after mustering out was ready to get back in the crime-solving game.

Neither Murder Will Out nor I Deal in Crime were the first radio series to make William Gargan a headliner.  During the 1941-42 season, Bill was a regular on Captain Flagg & Sergeant Quirt—a sitcom based on movie characters first played by Victor McLaglen and Edmund Lowe in the 1926 silent What Price Glory. (McLaglen reprised his role on the air, with Gargan taking over for Lowe in early 1942).  In the summer of 1945, Gargan was one of several performers on G.I. Laughs, a lighthearted half-hour that encouraged servicemen to send in jokes (I’m guessing they weeded out the inappropriate ones).  Other shows on which Bill appeared include Command Performance, Family Theatre, Good News of 1940, The Harold Lloyd Comedy Theatre, The Lady Esther Screen Guild Theatre, The Lux Radio Theatre, Philco Radio Time (with Bing Crosby), The Rudy Vallee Hour, and The Wonder Show (with Jack Haley).

August 7, 1949 found William Gargan back on the airwaves in another detective drama—Martin Kane, Private Eye.  The novelty here was that, while the show was being broadcast over Mutual Radio, it was also appearing on the small screen as one of NBC Television’s initial boob tube offerings.  Bill was in his element as the titular gumshoe who, when not on a case, spent most of his free time at Happy McMann’s Tobacco Shop. (Hap was played by veteran thespian Walter Kinsella.)  This hang out spot was fitting, since the show was sponsored by the United States Tobacco Company.  After two years as Kane, Gargan became more and more disenchanted with the show’s scripts and quit the series, handing off the role to Lloyd Nolan.  Nolan also took over Bill’s radio duties, particularly when the radio Kane moved to NBC for its last season beginning in 1951.

Bill Gargan would also welcome NBC Radio as his new home beginning in October of 1951.  He started another detective series—inarguably his longest-running radio success—as Barrie Craig, Confidential Investigator. Gargan’s new shamus wasn’t really all that different from his previous turn as Martin Kane.  In fact, the show’s original title, Barrie Crane, Confidential Investigator, had to be changed when the Kane people complained that the two names were too similar.  Bill would emote as Barrie from 1951 to 1955.  Later, he returned to his former Kane role in a syndicated TV version, appropriately titled The New Adventures of Martin Kane.

The time that William Gargan spent (as Martin Kane) at Hap McMann’s tobacco emporium was not at all beneficial. The actor developed throat cancer in 1958, and two years later his larynx had to be removed and replaced with an artificial voice box.  With his career effectively sidelined, Gargan went into television production…and spoke out fiercely against the dangers of smoking on behalf of the American Cancer Society.  His autobiography, Why Me?, was filled with colorful anecdotes about his career and his struggle with cancer.  William Gargan passed away on a flight from New York to San Diego, CA on February 17, 1979 at the age of 73.