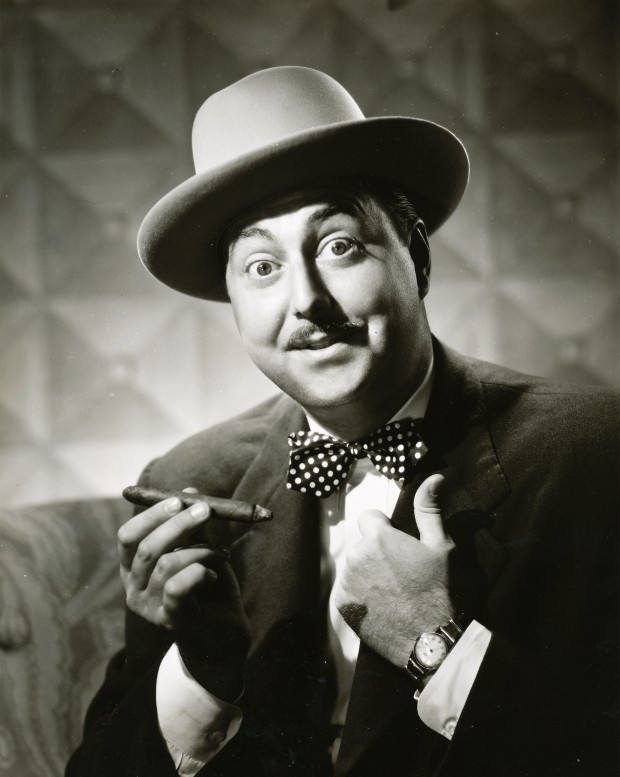 August 31, will mark the 75th anniversary of one of radio’s most popular and successful sitcoms, The Great Gildersleeve—a program that any old time radio fan worth their salt will tell you was spun-off from Fibber McGee & Molly, allowing show regular Throckmorton P. Gildersleeve to put down stakes in a town far from Wistful Vista where he garnered weekly laughs as devoted uncle (to Marjorie and Leroy Forrester), dutiful water commissioner and eligible bachelor on the prowl.  Today, however, marks what would have been the 102nd birthday of the man who was Harold Peary’s successor in the role when Hal was unable to convince Gildersleeve’s sponsor to move with him to CBS.  That man was Willard Lewis Waterman.

A native of Madison, Wisconsin, Willard Waterman developed an interest in radio and entertaining at a young age; he worked for station WIBA as a member of both a trio and quartet—one of which performed on the air every day at the crack of dawn.  If he thought he would get performing out of his system by the time he attended the University of Wisconsin to study engineering…well, it only took a little time working at the college radio station to dispel that notion.  Waterman spent so much time at the station—announcing, reading poetry, etc.—that it began to interfere with his classes (this author can relate) and so he decided to make broadcasting a full-time career.

Willard benefitted from the close proximity of Chicago—which at the time he moved there in 1934 was one of the major broadcasting hubs.  His first job was playing a villain in an episode of the radio serial Chandu the Magician…a character that was killed off in the first installment.  Subsequent gigs resulted in subsequent villainous portrayals…and subsequent deaths followed.  But Waterman soon built a solid reputation as a radio actor; he appeared on prestigious dramatic shows like The First Nighter, Grand Hotel and The Chicago Theater of the Air.  His versatility allowed him to emote on soap operas like Today’s Children and kids’ shows like The Tom Mix Ralston Straight Shooters.  (He played both a villain and the hero’s sidekick on that one—clearly Willard wasn’t taking any chances by that point in his career.)

In 1945, Willard landed a plum role on a sitcom called Those Websters—playing the part of the bumbling family patriarch, George Webster.  The show later moved to the West Coast and Waterman moved with it—and he found many more opportunities in radio awaiting him in Los Angeles.  He appeared on programs headlined by Joan Davis and Cass Daley, and series such as The Whistler, The Lux Radio Theater, Screen Director’s Playhouse, The Damon Runyon Theater and Amos ‘n’ Andy.  At the start of 1950, Willard was a regular on Ronald and Benita Hume Colman’s comedy-drama, The Halls of Ivy.

Meanwhile in Summerfield…Great Gildersleeve star Harold Peary was involved in a dispute with the program’s sponsor, Kraft Foods, over allowing him an ownership stake in the show.  Thinking he might get a little more leverage in the negotiations if he did what other NBC stars had recently done and allow CBS president William S. Paley to sign him to a capital gains deal, Hal jumped ship to the Tiffany network…only to learn that the S.S. Gildersleeve would not be following him.  Kraft elected to keep the show on NBC, and hired Willard to replace Peary as Summerfield’s water commissioner.  (Well, it only made sense to hire a Waterman, doesn’t it?)

Willard would play the part of Gildersleeve on radio from September 6, 1950 until March 21, 1957—and unless you listened very closely, it was often difficult to tell the difference…though one of the subtle variances was that Waterman refused to use Peary’s trademark “he-he-he-he-he” laugh.  On television—it was a different story.  The program appeared for one season in 1955 as a syndicated production of Hal Roach Studios, and in comparison to Peary playing the role in several films for RKO during the 1940s, Waterman was a little out of his element (he was also a little on the tall side at 6’4”).

Viewers might have rejected Willard as a TV Gildy, but he was most welcome in other small screen venues: he had recurring roles on The Eve Arden Show and The Real McCoys, and many couch potatoes remember him as friendly neighborhood grocer Otis Quigley on the TV sitcom version of Dennis the Menace.  In addition, Waterman landed a good deal of motion picture work; his movie appearances include Riding High, Louisa, Mystery Street, Rhubarb, It Happens Every Thursday, Hollywood or Bust, Auntie Mame, The Apartment and Get Yourself a College Girl.  His TV and movie appearances tapered off in the 1970s but Willard occasionally turned up in commercials (Alka-Seltzer, Kellogg’s)…and he also enjoyed a good deal of success in stage, appearing in such productions as How to Succeed in Business Without Really Trying, Mame and The Pajama Game.  Until his death in 1995 at the age of 80, Willard Waterman was a frequent attendee at old-time radio conventions, giving old and new generations of fans the opportunity to meet with a true radio great.