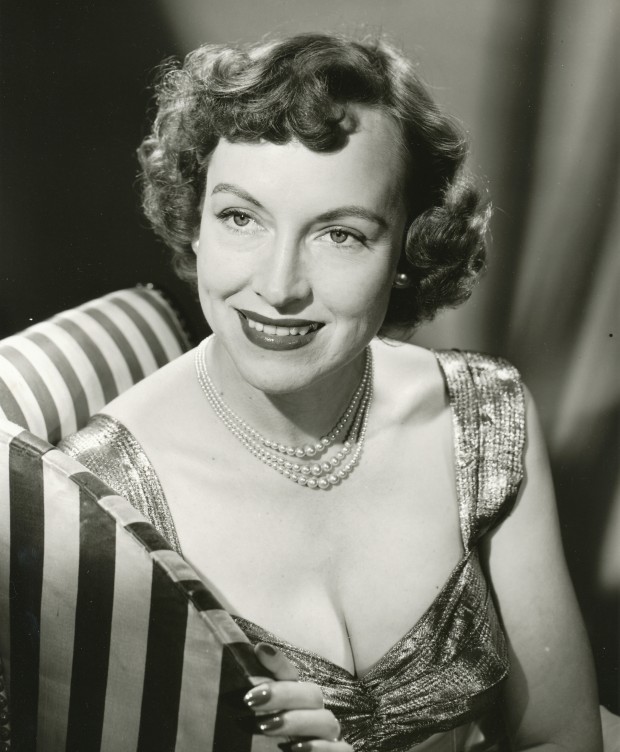 In our natal anniversary spotlight today is one of old-time radio’s indisputable veterans. She would get a special nod for proficiency alone, but Virginia Gregg—born in Harrisburg, Illinois on this date—was also one of the medium’s most versatile and talented female performers. Virginia played characters young and old, pretty and ugly, good and evil…and in addition, mastered many of the dialects necessary to be a continual presence in front of the microphone. She was also a familiar face on television and in movies as well.

Virginia Gregg Burket, the daughter of musician Dewey Todd Alphaleta and businessman Edward Gregg, aspired to a career as tuneful as her mother’s. The family moved to California while Gregg was a young girl, and she attended various schools in The Golden State. While at Jefferson Junior High in Long Beach she revealed a passion for sports, and excelled as a pitcher on the school’s baseball team. At a senior high school in Pasadena, Virginia demonstrated an aptitude for the double bass, which she indulged as a musician with the Pasadena Symphony. This also led her to a gig as a vocalist with “The Singing Strings,” an aggregation that offered the future thespian’s first radio exposure at Los Angeles station KHJ in 1937.

By the early 1940s, Virginia was demonstrating that she could act, too. She started out with appearances on the likes of Lights Out and The Lux Radio Theatre, and followed up with work on such shows as All-Star Western Theatre, Cavalcade of America, California Caravan, The Count of Monte Cristo, The First Nighter Program, Michael Shayne, One Man’s Family, Pat Novak for Hire, Screen Director’s Playhouse and The Voyage of the Scarlet Queen. Gregg was also a member of the informal stock company of radio’s The Whistler (jokingly referred to as “Whistler’s children”).

During the 1947-48 season of Ellery Queen, Gregg was one of several actresses who played the master sleuth’s girlfriend, Nikki Porter…and for a while, girlfriend-of-the-detective seemed to be a niche for Virginia. One of her best-remembered radio roles was that of socialite Helen Asher, the wealthy inamorata of Richard Diamond, Private Detective (played by Dick Powell). And though she had played various previous roles on Let George Do It, the comic crime drama featuring Bob Bailey, Gregg inherited the role of George Valentine’s loyal gal Friday Claire “Brooksie” Brooks after Frances Robinson left the series. (It was only right: Robinson had played Helen on Richard Diamond for a brief time as well.) Gregg also worked on The Story of Dr. Kildare, a syndicated series based on the MGM movie franchise; she played the garrulous Nurse Parker, who was a constant thorn in the side of crusty Dr. Leonard Gillespie (Lionel Barrymore).

Gregg married producer-director Jaime del Valle in 1948—and while the union lasted only little more than a decade, it did give the actress an advantage where her competition was concerned. She worked frequently on Family Theatre, on which del Valle was a presence, as well as three other shows overseen by her new spouse: Yours Truly, Johnny Dollar, The Line-Up and The General Electric Theatre. The 1950s would prove to be one of Virginia’s most productive periods in radio. She was great friends with Jack Webb, the auteur of Dragnet, and not only appeared frequently on that show’s radio incarnation, but would be seen on the TV versions (both 1951-59 and 1967-70) as well. Gregg played guest roles on later Webb small screen productions such as Adam-12 and Emergency!, and made a memorable impression as Ethel Starkie in Jack’s big screen version of Dragnet in 1954.

Virginia’s other radio “patron” was director Norman Macdonnell, who became acquainted with her talent and professionalism when he took charge of The Adventures of Philip Marlowe. Those Marlowe appearances enabled Gregg to work on such later Macdonnell shows as Escape, Fort Laramie, Rogers of the Gazette, Romance and Have Gun—Will Travel (on which she played Missy Wong, the romantic interest of Carlton Hotel concierge Hey Boy, played by Ben Wright). But the “jewel of the crown” was the amazing work she did on Gunsmoke, where her versatility in handling an amazing range of acting roles would be called on practically week after week. (The actress made a number of appearances on the boob tube incarnation of Gunsmoke as well.) Virginia’s other radio gigs (known at this time) include Barrie Craig, Confidential Investigator, Broadway’s My Beat, The CBS Radio Workshop, Crime Classics, Dangerous Assignment, Frontier Gentleman, Hallmark Playhouse, The Halls of Ivy, The NBC University Theatre, Night Beat, The Six Shooter, Suspense, Tales of the Texas Rangers and Wild Bill Hickok.

Virginia Gregg began her movie career with uncredited roles in such classics as Notorious, Body and Soul and Gentleman’s Agreement. Her work on the silver screen wasn’t as inexhaustible as her radio and TV contributions, but she appeared in a number of movies well worth the effort tracking down: Casbah (1948), Love is a Many-Splendored Thing (1955), I’ll Cry Tomorrow (1955), Crime in the Streets (1956), The Fastest Gun Alive (1956), Portland Exposé (1957) and The Hanging Tree (1959), to name just a few. She had a plum role as Nurse Maj. Edna Haywood in the Cary Grant-Tony Curtis comedy Operation Petticoat (1959), and along with radio veteran Jeanette Nolan, she provided the “voice” of Mrs. Bates in Alfred Hitchcock’s Psycho (1960) (she would reprise that role in two of the sequels, Psycho II and Psycho III).

Gregg’s television resume was extensive, and that’s a bit of an understatement. She guest starred on a number of shows now considered classics: Alfred Hitchcock Presents, Maverick, Rawhide, Hazel, Perry Mason and so many more. Nostalgia fans remember her as one of four unlucky souls to have tried on “The Masks” in a classic Twilight Zone outing, and Virginia would revisit her radio roots by doing voice work on such cartoon series as Calvin and the Colonel (which featured Amos ‘n’ Andy’s Freeman Gosden and Charles Correll), The Herculoids, Yogi’s Gang and These are the Days. Gregg was also a participant in the radio “revival” of the 1970s, appearing frequently on The Sears/Mutual Radio Theatre. She once admitted to an interviewer “The British know a good medium when they hear it,” referring to how radio drama was never completely abandoned on the other side of the pond. Virginia Gregg passed away at the age of 70 in 1986.