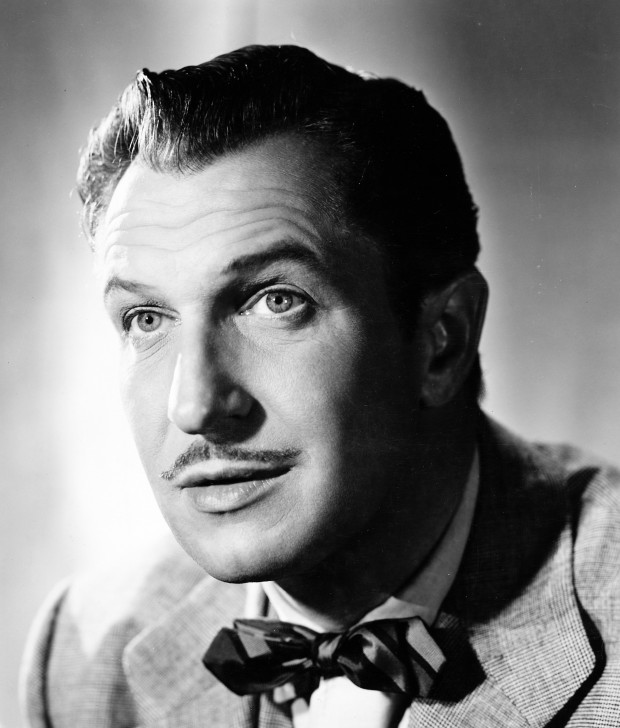 If actor Vincent Price—born Vincent Leonard Price, Jr. on this date in St. Louis, Missouri in 1911—had decided to ignore the call of the footlights and pursue honest work, it’s safe to say his future would have been fairly secure. His father, Vincent, Sr., was president of the National Candy Company—the largest candy company in America at that time. Vincent’s grandfather (also named Vincent—the family apparently didn’t have much imagination), invented “Dr. Price’s Baking Powder,” the first cream of tartar baking powder. In later years, Price established sidelines as a renowned art expert and gourmet chef; the former stemming from his graduating from Yale with a degree in art, the latter allowing him to write several best-selling cookbooks.

But Vincent Price decided that the actor’s life was for him, and fans are all the richer for it. He developed an interest in acting and fine arts during his years at Yale, and in the mid-1930s began to appear in a number of critically-acclaimed stage productions. His big break came from a plum role opposite Helen Hayes in Victoria Regina in 1936, which brought him such good fortune that he later named his first daughter “Victoria” (a superstitious man, he was also gladdened by the fact that her mother had been raised in Victoria, British Columbia). Two years later, Vincent would make his feature film debut in Service de Luxe (1938)…a movie that he didn’t have many positive things to say about, but which paved the way to future successes in The Private Lives of Elizabeth and Essex (1939), The House of Seven Gables (1940), The Song of Bernadette (1943) and Laura (1944).

We tend to remember Price as a horror icon. Interestingly enough, his only true horror role in his early days of cinema was playing the titular The Invisible Man Returns in 1940; the actor only really got started in the horror movie genre with the 3-D House of Wax in 1953. He followed that with such films as The Fly (1958), House on Haunted Hill (1958) and The Tingler (1959), and by the 1960s, horror had a new face in Vincent Price—particularly the celebrated series of films based on the works of Edgar Allan Poe that were directed by Roger Corman: House of Usher (1960), The Raven (1963), The Masque of the Red Death (1964) and several others.

What often is ignored about Price’s phenomenal career—though certainly not overlooked by old-time radio fans—is that Vincent excelled in the aural medium as one of several actors more than capable of meeting radio’s demands. His earliest recorded work was on an episode of Rudy Vallee’s The Fleischmann’s Yeast Hour on June 18, 1936…where he was memorably introduced as “Vincent Prince.” Undaunted, Price would return to Vallee’s microphone in April of 1938 (with the show now sponsored by Royal Gelatin desserts) to perform a scene from Ever After (a comedy sequel to Snow White and the Seven Dwarfs) with actress Edith Barrett.

Vincent Price was called upon frequently to perform on radio’s top dramatic anthology programs. The actor appeared on such shows as The Cavalcade of America, The CBS Radio Workshop, Columbia Presents Corwin, Family Theatre, Favorite Story, Hollywood Star Playhouse, Hollywood Star Time, The Lady Esther Screen Guild Theatre, The Lux Radio Theatre, The NBC Radio Theatre. NBC Star Playhouse, The Philip Morris Playhouse, Stars Over Hollywood and The Theatre Of Romance. Price was also flexible enough to appear in comedic venues like The Sealtest Village Store and Duffy’s Tavern. His February 6, 1949 appearance on The Lucky Strike Program Starring Jack Benny remains one of Jack’s funniest half-hours, as he and Price competitively vie to be the leading man opposite Claudette Colbert in a future broadcast of The Ford Theatre.

In addition, Price lent his dramatic talents to such crime dramas as This is Your FBI and Yours Truly, Johnny Dollar—the latter program even tailored the story to the guest star, calling it “The Price of Fame Matter” (02/02/58). “Radio’s outstanding theatre of thrills,” Suspense, made excellent use of the actor—Vincent graced such classic episodes as “Fugue in C Minor” (06/01/44) and “Hunting Trip” (09/12/46). (Price appeared on a November 10, 1957 broadcast of the series in an adaptation of Poe’s “The Pit and the Pendulum”…and four years later, he would star in a film version as part of Roger Corman’s Poe series.) I personally believe Vincent Price did some of his best radio work on Suspense’s sister series, Escape. He was in what many believe to be the definitive version of “Three Skelton Key” (03/17/50), as well as “Present Tense” (01/31/50) and a favorite of mine, “Blood Bath” (06/30/50). (Price later reprised his roles from “Key” and “Tense” in Suspense’s later years.)

For many old-time radio mavens, Vincent Price is best remembered for portraying Leslie Charteris’ creation Simon Templar on The Adventures of the Saint, a role he inherited from Brian Aherne (who played Templar in 1945). From July 9, 1947 to May 20, 1951, Vincent emoted as the suave jewel thief who had renounced his past and was now focusing his energies on solving murders. Because “the Robin Hood of modern crime” had done quite well in his career of acquiring precious gems, Templar did not want for money and spent a great deal of his time indulging his culinary tastes at posh restaurants and satisfying his love for the fine arts. The perfect role for Vincent Price, wouldn’t you say? The survival of many Saint broadcasts, by the way, owes a lot to the actor himself; he found a treasure trove of transcriptions from the program at his residence one day and was about to chuck them out when he called SPERDVAC to see if anyone was interested. (The SPERDVAC rep broke all existing land-speed records rushing to Vincent’s house to collect the discs.)

Even after the Golden Age of Radio was drawing to a close, Vincent Price still professed a fondness for the medium. He was one of the five rotating hosts (emceeing “mystery and suspense” on Wednesday nights) of The Sears (Mutual) Radio Theater in 1979, the Elliott Lewis-Fletcher Markle attempt to revive radio drama. (Sadly, they did not succeed). The actor was also host of a BBC program, The Price of Fear, which was heard beginning in 1973. (Proving that our cousins across the pond were right in their refusal to abandon the art of radio drama.)

Vincent Price succumbed to lung cancer at the age of 82 in October of 1993.