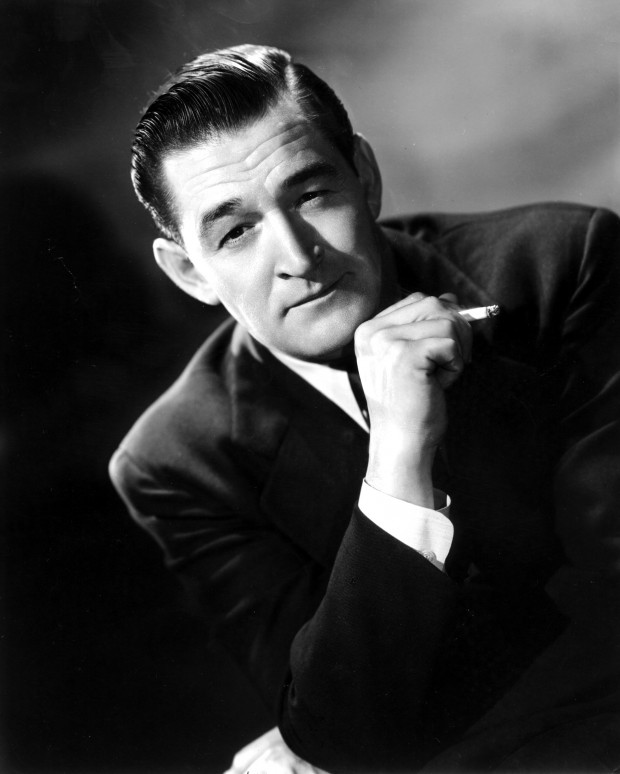 If you’ve seen this popular character actor’s mug in any movie on Turner Classic Movies I guarantee you it’s a most familiar one. He’s the sneering, Brylcreemed thug from a countless number of film noirs, notably The Enforcer (1951)—where he plays a member of a murder-for-hire operation who’s agreed to turn states’ evidence on behalf of crusading D.A. Humphrey Bogart. Born Edward Gildea De Corsia on this date in 1905, Ted de Corsia relied on his impressive size, gravelly voice and streetwise Brooklyn origins to effectively play onscreen menaces…though he could on occasion play a good guy, like a prison warden (Inside the Walls of Folsom Prison) or judge (A Place in the Sun). Many individuals are unaware, however, that de Corsia had a long career in radio…where he displayed an amazing range that lent himself to roles like that of Scotland Yard inspector Peter Black on the CBS Radio crime drama Pursuit.

Ted’s father (Edward G. de Corsia) was a vaudevillian who hailed from Texas, and the younger de Corsia lived a life on the road with his family, attending school in various stopovers in New York, Philadelphia, Chicago, etc. At the same time, Ted gained acting experience as a child actor in several road companies, and during the Depression found steady work in radio. De Corsia became a frequent presence on The March of Time, where he imitated the likes of President Herbert Hoover, Huey Long, and Benito Mussolini. One of his steady gigs over the ether was on The Adventures of Ellery Queen in 1939, playing the role of Sergeant Velie, and in addition he starred as a lovestruck Brooklyn cabbie on a short-lived situation comedy in 1941 entitled Joe and Mabel. (De Corsia, a dedicated Dodgers fan, purportedly asked the announcer on this last program to keep him updated on the team’s game progress whenever it was relevant to the broadcast.)

De Corsia’s radio resume is a lengthy one; he appeared on such favorites as The Adventures of Maisie, Bold Venture, Boston Blackie, The Cavalcade of America, The Columbia Workshop, The CBS Radio Workshop, The Story of Dr. Kildare, Escape, Frontier Gentleman, Hallmark Playhouse, Let George Do It, The Line-Up, The Molle Mystery Theatre, Murder Clinic, Mystery In the Air, Night Beat, Pat Novak for Hire, Richard Diamond, Private Detective, Rogue’s Gallery, The Shadow, The Silent Men, The Adventures of the Saint and This is Your FBI. Occasionally, Ted would land the lead role on series such as McGarry and His Mouse and That Hammer Guy. From 1949 to 1950, de Corsia also played the lead on Pursuit, a solid mystery series that centered on the exploits of Scotland Yard Inspector Peter Black (though he went by “Inspector Harvey” in the pilot and premiere episodes of the show). De Corsia was joined on the series by radio veteran Bill Johnstone as Chief Inspector Harkness (who served as Pursuit’s narrator), but Ted’s stint on the program was fairly brief: he handed over the role to John Dehner in March of 1950…possibly due to his burgeoning film career.

A finer film debut could not have been concocted for Ted de Corsia than that of the blackmailing Sidney Broome in the Orson Welles-directed cult noir The Lady from Shanghai (1947). Ted’s next film appearance was also a memorable one: harmonica-playing Willie Garzah, an ex-wrestler whose murder of a young model leads to a confrontation with police on the Williamsburg Bridge in Jules Dassin’s seminal The Naked City (1948). Film noir was definitely de Corsia’s calling; he acted in such movies as Mr. Soft Touch (1949), The Turning Point (1952), Crime Wave (1954), The Big Combo (1955), Slightly Scarlet (1956), The Killing (1956—outstanding as a cop-gone-bad) and Baby Face Nelson (1957). In addition, Ted played an assortment of up-to-no-good guys in Westerns like The Outriders (1950), Gunfight at Dodge City (1957), The Lawless Eighties (1957), Gun Battle at Monterey (1957) and Noose for a Gunman (1960). Every once in a while, to break the bad guy monotony, Ted would fall back on his incredible range and take on interesting roles like those in It Happens Every Spring (1949), Three Secrets (1950) and From the Terrace (1960).

On the small screen, Ted guest starred on many hit TV series—and indulged his fondness for Westerns playing parts on Death Valley Days, Gunsmoke, Maverick, Lawman, Sugarfoot, Rawhide and Daniel Boone. He turned up everywhere, on sitcoms like Get Smart and Green Acres and science-fiction favorites like The Outer Limits and Voyage to the Bottom of the Sea. Before his death in 1973 at the age of 69, de Corsia went out on a memorable note…literally. In the 1972 movie The Outside Man, he plays a mobster named Victor who’s killed by hit man Jean-Louis Trintignant early in the film, but later has an encore in a shootout scene around his bier (he’s been embalmed seated in a chair, holding a cigar).