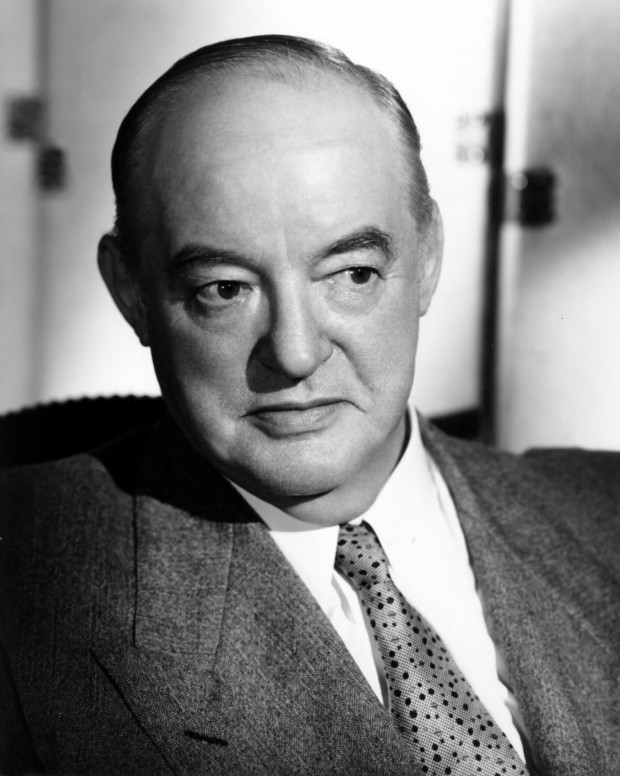 Despite appearances in only two dozen films in an eight-year time span, Sydney Hughes Greenstreet—born on this date in 1879—remains one of the motion picture industry’s best-remembered character actors.  Greenstreet was fortunate to make an indelible impression in so many movie classics:  Signor Ferrari, the owner of The Blue Parrot nightclub in 1942’s legendary Casablanca (Sydney has only to swat at a simple fly, and his character is immediately revealed to the viewing audience);  Jerome K. Arbutny, the shady shyster whose downfall is brought about by a sweepstakes ticket in Three Strangers (1946);  Evan Llewellyn Evans, the crass network sponsor (based on George Washington Hill, the real-life president of Jack Benny’s longtime sponsor the American Tobacco Company) who unforgettably hocks a loogie on a conference table in The Hucksters (1947); and perhaps most memorable of all—Kasper Gutman, the effetely corpulent villain in The Maltese Falcon (1941) …a role which served as the actor’s silver screen debut at the age of 62 (and garnered him his only Academy Award acting nomination).

Sydney Greenstreet was born in Sandwich, Kent, England to Ann Baker and John Jarvis Greenstreet, who made his living at various times as a tanner, a leather merchant, and a Merchant Marine.  As for Sydney—he had ambitions to be a tea planter, and at age eighteen he left home for Sri Lanka, where he had planned to make his fortune.  Unfortunately for the tea business—but lucky for us movie fans—a drought put a quick end to Greenstreet’s farming motivations, and he returned to England five years later to undertake a series of odd jobs, including managing a brewery.  To alleviate the boredom of the beer business, Sydney took up acting lessons under the tutelage of Ben Greet, the manager of an English Shakespearean company.

Greenstreet’s theatrical debut was in 1902, playing a murderer in a production of Sherlock Holmes.  He followed Greet to the U.S. two years later, and made his Broadway debut in Everyman.  Sydney appeared in a variety of productions, many of them Shakespearean plays like The Merchant of Venice, As You Like It, and The Merry Wives of Windsor.  (Legend has it that the actor not only landed roles in every play composed by The Bard of Avon, but had committed 12,000 lines of Shakespearean verse to memory.)  His success in the American theatre persuaded Greenstreet to make the U.S. his permanent home.  By the mid-1930s, Sydney found himself working alongside the legendary Alfred Lunt & Lynn Fontaine in many of their Theatre Guild productions, including The Taming of the Shrew, Idiot’s Delight, and The Seagull.

Sydney Greenstreet’s turn as Uncle Waldemar in a Theatre Guild presentation of There Shall Be No Night in 1940 attracted the attention of John Huston.  The director felt that Sydney was perfect for the dignified dandy that was Kasper Gutman in The Maltese Falcon, and cast the 300-pound actor despite Greenstreet’s never having appeared in a motion picture.  Sydney’s association with The Maltese Falcon would lead to two felicitous collaborations with Falcon’s star, Humphrey Bogart (as anti-hero Sam Spade), and supporting player Peter Lorre (who portrayed Joel Cairo, Gutman’s confederate).

Greenstreet, having signed a contract with Warner Brothers, would later appear with Bogie in Across the Pacific (1942), Casablanca, Passage to Marseille (1944), and Conflict (1945).  Sydney’s onscreen partnership with Peter Lorre was even more prolific: in addition to Falcon, Casablanca, and Marseille, the two actors were teamed up for Background to Danger (1943), The Mask of Dimitrios (1944), The Conspirators (1944),The Verdict (1946), and Three Strangers—plus a gag appearance in the all-star Warners’ production of Hollywood (1944).  At the risk of making an awful pun, Sydney was Warner Brothers’ “Merchant of Menace” …but to broaden his movie range, Greenstreet also appeared in lighter fare like Pillow to Post and Christmas in Connecticut (both 1945).  Sydney would continue to demonstrate his versatility by playing heroic parts (1948’s The Velvet Touch) and villains (1949’s Flamingo Road)…and yet never being afraid to poke fun at his screen image, as with his cameo in the Dennis Morgan-Jack Carson-Doris Day frolic It’s a Great Feeling (1949).

Sydney Greenstreet’s cinematic swan song was 1949’s Malaya, in which he co-starred with Spencer Tracy and James Stewart.  For all intents and purposes, Greenstreet announced his retirement from acting in 1952…but this didn’t discourage him from seeking out new venues to demonstrate his thespian prowess.  One such setting was radio.  In his capacity as a motion picture actor, Sydney was frequently requested to reprise his silver screen triumphs over the airwaves on such dramatic anthologies as Academy Award Theatre, The Lady Esther Screen Guild Theatre, and The Lux Radio Theatre.  He also joked and sent up his movie persona alongside such radio funsters as Fred Allen, Edgar Bergen & Charlie McCarthy, Freeman Gosden & Charles Correll (Amos ‘n’ Andy), Bob Hope, and Alan Young.  Greenstreet’s radio resume includes appearances on The Andrews Sisters Show, Command Performance, G.I. Journal, The Radio Reader’s Digest, and Repeat Performance.

Beginning October 20, 1950, Sydney Greenstreet began making weekly appearances in radio listeners’ living rooms as the star of The New Adventures of Nero Wolfe, NBC’s attempt to successfully bring author Rex Stout’s literary sleuth before a microphone.  It was the third try at a Nero Wolfe series (there had been previous versions in 1943-44 and 1946), and Greenstreet seemed to be a perfect fit as “the detective genius who rates the knife and fork the greatest tools ever invented by man.”  (The Wolfe in the novels tipped the scales at 286 pounds—he was even heftier than Brad Runyon!)  But the NBC series was beset with problems: the network had difficulty obtaining a sponsor (Plymouth expressed a brief interest, then abandoned the show) and despite the presence of Sydney, the ratings for the series were abysmal.  Greenstreet was convinced that the dismal numbers were the fault of the actor emoting as Wolfe’s leg man Archie Goodwin…which is why there was high turnover in that role.  Wally Maher, Lawrence Dobkin, Herb Ellis, Gerald Mohr and Harry Bartell all took a shot at playing the part.  The show was given its pink slip on April 27, 1951, and it would be Sydney Greenstreet’s final acting gig before his death in 1954 at the age of 74.