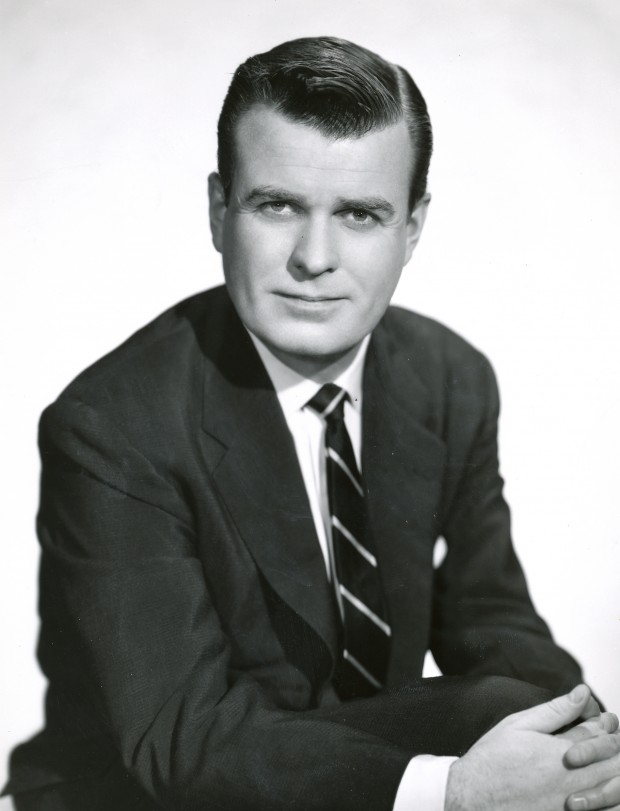 Certified couch potatoes have seen today’s birthday boy guest star in a number of TV classics: Alfred Hitchcock Presents, Batman, The Andy Griffith Show, The Brady Bunch…and so many more. Classic movie fans remember the man of the hour as a leading man in several B-pictures, but he occasionally appeared in higher profile films like Mother Wore Tights (1947), Above and Beyond (1952), Ten Thousand Bedrooms (1957) and Home Before Dark (1958). But for old-time radio devotees, the name of Steve Dunne instantly brings to mind a short-lived acting stint as “the greatest private detective of them all” on The (New) Adventures of Sam Spade.

Born Francis Michael Dunn in 1918 on this date in Northampton, MA, Steve Dunne supplemented his high school studies by working as a stenographer for the local branch of General Electric. By the age of 17, Steve expressed an interest in drama and journalism, which he majored in while attending the University of Alabama. To put himself through college, Dunne landed a job as a disc jockey with a local radio station…and enjoyed that so much that he decided to make it his career. From those auspicious beginnings, he moved on to Chicago and became a respected announcer…and then with another roll of the die headed to New York, where he was hired by WOR, and subsequently the Mutual Broadcasting System.

Dunne’s employment in the Big Apple would eventually win him the notice of Hollywood, where he landed both a screen test and motion picture contract by the mid-40s. Because of his need to move to the West Coast, Steve began to work in radio there—and one of his first major gigs was a starring role as a criminal psychologist in a series entitled Danger, Dr. Danfield, which premiered over ABC on August 11, 1946. Co-starring Joanne Johnson, Herb Butterfield and Jay Novello, Danfield did not particularly wow its listening audience; one reviewer at the time remarked the program was “one of the worst detective shows ever to curse the ABC airwaves.” The American Broadcasting Company must have taken this advice to heart because they cancelled the show in April of 1947. Steve, however, got a promotion: he was cast in a follow-up series (as an intrepid newspaper reporter named Lucky Larson), Deadline Mystery—which premiered a week after Danfield’s cancellation and ran until August of that year.

When he wasn’t emoting on such classics as Family Theatre, The Lux Radio Theatre, Richard Diamond, Private Detective, Screen Director’s Playhouse and Stars Over Hollywood, Steve Dunne was doing what he came out to Hollywood to do: work in motion pictures. He graced such films as Junior Miss (1945), Doll Face (1945), Colonel Effingham’s Raid (1946), The Return of October (1948), The Big Sombrero (1949) and Miss Grant Takes Richmond (1949). While working for Columbia, he appeared in three movies with future “Miss Moneypenny” Lois Maxwell: The Dark Past (1948), The Crime Doctor’s Diary (1949) and Kazan (1949). But it was a role in a small B-picture entitled Shock (1946) that brought Dunne to the attention of producer William Spier, who was looking for an actor to replace Howard Duff as radio gumshoe Sam Spade on the popular detective drama.

NBC had pulled The Adventures of Sam Spade off the air when longtime sponsor Wildroot Cream Oil dropped its sponsorship—the history of this would literally fill a book, but the company is believed to have bowed to both economic and political pressure (both Spade star Howard Duff and original creator Dashiell Hammett found their names in the notorious Red Channels directory). NBC, in turn, found itself besieged by fans of the program and hastily put the show back on the air in the fall of 1950 with Dunne as the insouciant gumshoe. The problem was that Steve was simply not up to the task of duplicating the tough guy-quality that bore Duff’s distinctive stamp; many historians have complained about Steve’s adolescent voice but John Dunning put it best in Tune in Yesterday when he observed the actor “sounded like Sam in knee pants.” It’s to the credit of Bill Spier (plus Dunne and co-star Lurene Tuttle) that the show did soldier on for one more season until its cancellation on April 27, 1951.

Steve Dunne pressed on with his movie career, with his film resume including favorites such as The Underworld Story (1950), The WAC from Walla Walla (1952) and I Married a Woman (1958). Most of the time, he focused on announcing and hosting such small screen quiz shows as You’re On Your Own, Truth or Consequences (from 1957 to 1958) and Double Exposure, and did star in two short-lived TV series—the first in the sitcom Professional Father in 1955, in which his leading lady was the future Mrs. June Cleaver, Barbara Billingsley. The second was a 1960-61 syndicated crime drama entitled The Brothers Brannagan, which cast Dunne and Mark Roberts as a pair of investigators who worked out of an Arizona resort. Neither of these two shows is rerun much (if at all), so if you’ve come across Steve on TV it’s probably with guest shots on the likes of The Beverly Hillbillies, Petticoat Junction or Dragnet. His last show business credit was in the Walt Disney comedy Superdad (1973); Steve Dunne passed away in 1977 at the age of 59.