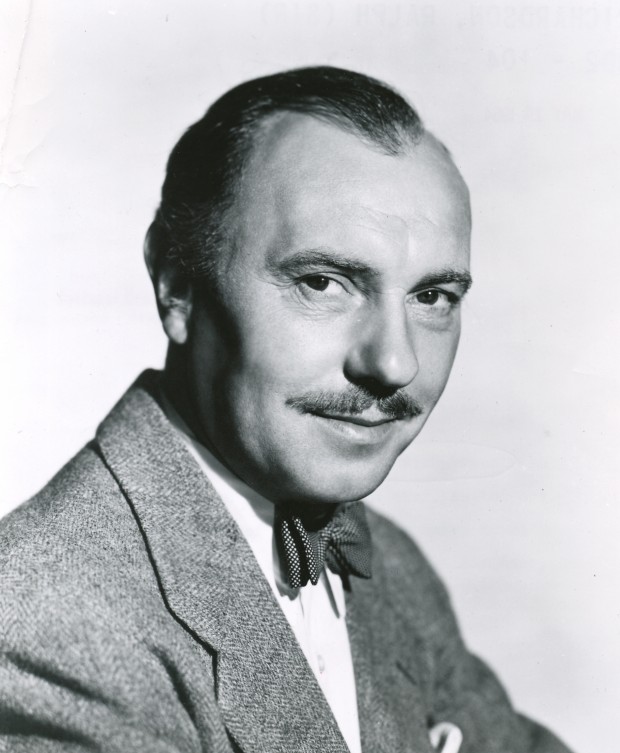 There’s a hilarious story (possibly apocryphal, so we make no claims as to its accuracy) concerning Sir Ralph Richardson, who was born in Cheltenham, Gloucestershire, England on this date in 1902. Performing in a play, the famously eccentric Richardson stopped the action and addressed the audience with the traditional “Is there a doctor in the house?” joke. When a physician acknowledged that he was, indeed, in attendance, Sir Ralph joshed: “Isn’t this a terrible play, Doctor?”

The actor who would eventually be knighted in 1947 for his contributions to the British theatre was the third (and youngest) son of Arthur and Lydia Richardson, both renowned artists (father Arthur had been the senior art master at Cheltenham Ladies’ College). For murky reasons that are still debated by biographers today, Mr. and Mrs. Richardson split in 1907—no divorce or formal separation involved—and Ralph’s elder brothers Christopher and Ambrose went off with their father while Ralph remained with Lydia. (“She eloped with me, then age four,” he later mused.)

Lydia raised Ralph as a Roman Catholic, and very much wanted him to enter the priesthood…but at a seminary for training priests, Richardson soon found he lacked the discipline to commit to such a career. At age sixteen, he obtained a position as an office boy with a prestigious insurance firm—once again, his nonchalant approach to his job (as well as a penchant for pulling pranks) jeopardized his future with the company. But a legacy of £500 left to him by his paternal grandmother enabled him to give the Brighton School of Art a try. It was eventually revealed that he had no aptitude for an art career, either. Ralph finally decided on an actor’s life after seeing Sir Frank Benson in the title role of a touring production of Hamlet.

Richardson went an unconventional route in his quest to become a professional actor: he paid a local theatrical manager ten shillings a week to let him become a member of the troupe, where he quickly learned the craft of acting. His stage debut was as a gendarme in a Brighton production of Les Misérables, and he later landed roles as Banquo in Macbeth and Malvolio in Twelfth Night. His first professional gig—a year later, after he had been engaged by theatrical manager Charles Doran for the princely sum of £3 a week—was playing Lorenzo in The Merchant of Venice. Ralph would later tackle important parts in Macbeth and Julius Caesar.

The early foundation of his work as a Shakespearean actor—though Sir Ralph Richardson also performed in modern works as well—would eventually lead to his acclaim as one of the greatest English stage actors of the twentieth century. Richardson is often recognized alongside two other actors—contemporaries Sir John Gielgud and Sir Laurence Olivier—as representing the crème de la crème of British theater. In fact, Ralph was invited by producer Harcourt Williams to join the prestigious Old Vic company in 1930, ostensibly to take over for Gielgud in leading the dramatic company the following year. There was a clash of personalities between the two thespians at first, but eventually a long friendship and professional association blossomed between Richardson and Gielgud that would last many years. Richardson’s relationship with Laurence Olivier was also a close one, particularly on stage (where they often played opposite one another in Old Vic productions staged during the 1940s), but also in films like The Divorce of Lady X (1938) and the very entertaining Clouds Over Europe (1939—released in the U.K. as Q Planes).

Ralph Richardson’s first credited film appearance was in the 1933 feature The Ghoul, and while maintaining his successful stage career he welcomed movie roles with open arms (he was no snob about motion pictures, once observing that films “are to the stage what engravings are to paintings”). Sir Ralph appeared in two movies based on H.G. Wells works: Things to Come and The Man Who Could Work Miracles (both released in 1936). The more famous titles on his cinema resume include The Citadel (1938), The Four Feathers (1939), The Lion Has Wings (1939), and The Day Will Dawn (1942). Both his work on film and on stage were temporarily curtailed by the outbreak of World War II and Ralph’s determination to do his part for England’s war effort. He enlisted in the Royal Naval Volunteer Reserve as a sub-lieutenant pilot, and (despite what he believed of his limitations in the air) rose to the rank of lieutenant commander.

In 1948, Richardson graced two more films that are considered among his most impressive acting showcases: Anna Karenina (alongside Mrs. Olivier, Vivien Leigh), and the Carol Reed-directed The Fallen Idol. The following year, the actor made his Hollywood feature film debut with The Heiress (1949), in which he played opposite eventual Best Actress Oscar winner Olivia de Havilland (as her father, Dr. Austin Sloper). (Richardson was nominated for an Academy Award for Best Supporting Actor…but had to settle for a consolation prize in Best Actor honors from the National Board of Review.) Ralph enjoyed playing the role so much that he reprised it for a West End production of The Heiress in February of 1949 (under the direction of his good friend John Gielgud). He continued his film work throughout the 1950s in such gems as Outcast of the Islands (1951), Home at Seven (1952—his sole attempt at directing a film), Breaking the Sound Barrier (1952—which won him several Best Actor honors, including a British Academy of Film and Television Arts Award), and Richard III (1955—featuring Gielgud and Olivier).

Ralph Richardson’s rich baritone voice was a natural for the aural medium; he had been performing on radio as far back as 1929, and even performed on CBS’ Columbia Workshop in 1946 in Old Vic productions of Richard III and Peer Gynt (one of his notable stage triumphs). In 1954, he appeared as a performer/host on NBC’s Theatre Royal, an outstanding British drama anthology that also featured (in its first season) Sir Ralph’s colleague Laurence Olivier as a host. The following year, NBC rebroadcast a number of BBC radio dramas that teamed Richardson with his good friend John Gielgud in dramatizations of Sherlock Holmes tales (Sir John was Sherlock, Sir Ralph was Dr. Watson). Orson Welles was also featured on this series as Holmes’ nemesis Professor Moriarty, and Gielgud’s brother Val not only directed some of the plays, but fittingly appeared as Mycroft Holmes (Sherlock’s bro) on one occasion.

To do justice to Sir Ralph Richardson’s acting career would require a blog the size of an encyclopedia. Suffice it to say, he continued his impressive string of feature film turns in such classics as Exodus (1960), Long Day’s Journey Into Night (1962), Doctor Zhivago (1965), The Wrong Box (1966), Oh! What a Lovely War (1969), Dragonslayer (1981), and a personal favorite—Time Bandits (1981). Before his death in 1983, Sir Ralph appeared in several scenes with Gielgud and Olivier in a 1981 TV miniseries entitled Wagner (it was released shortly after Richardson’s passing), and achieved a bit of recognition from his industry peers with a second Best Supporting Actor Oscar nomination for Greystoke: The Legend of Tarzan, Lord of the Apes (1984). (He would receive posthumous honors for this role from the New York Film Critics Circle.)