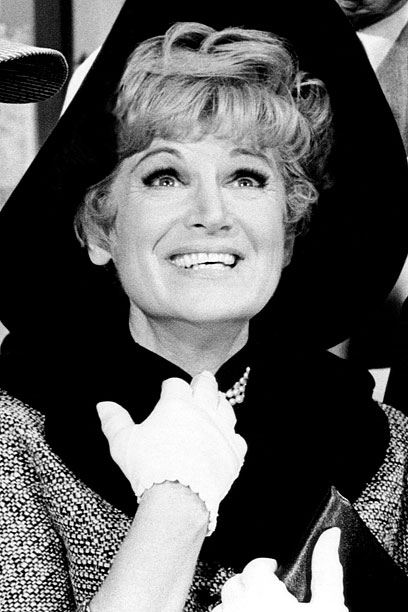 Couch potatoes remember Shirley Mitchell as Lucy Ricardo’s pal Marion Strong, the women’s club colleague whose distinctive laugh prompted Lucy (in the episode “Lucy Tells the Truth”) to offer up the verbal smackdown: “Stop cackling, Marion—I’ve been waiting ten years for you to lay that egg!”

Shirley became good friends with Lucille Ball during the famous redhead’s radio days on My Favorite Husband.  The actress herself was born in Toledo and, after attending both the University of Toledo and the University of Michigan (where she played summer stock), found steady work as a radio actress in Toledo, Cleveland and then Chicago, one of the major radio centers at that time.  Mitchell performed on such soap operas as The Story of Mary Marlin and Road to Life, as well as the popular dramatic anthology The First Nighter Program.  Relocating to Los Angeles in the 1940s gave her a great deal more exposure over the ether, appearing on programs like Dr. Christian, Suspense, Lights Out, The Lux Radio Theatre and Yours Truly, Johnny Dollar.

Shirley is perhaps best remembered for her comedic performances.  One of her first L.A. gigs was emoting on The Sealtest Village Store, and her friendship with star Joan Davis would later allow her to appear in regular roles on the comedienne’s follow-up programs like Joan Davis Time (a.k.a. Joanie’s Tea Room) and Leave It to Joan.  Mitchell was also hired to work on Fibber McGee & Molly, playing the part of man-crazy war worker Alice Darling—a character created by head writer Don Quinn when several of the male regulars like Gale Gordon and Bill Thompson left to fulfill their military obligations during World War II.  (The Alice character was phased out once Gordon and Thompson were able to return to the show.)  Other situation comedies that regularly featured Shirley’s talents include Amos ‘n’ Andy, My Little Margie and Young Love.  In addition, she worked alongside talents like Jack Benny, Bob Burns, Red Skelton, Danny Kaye, Bud Abbott & Lou Costello and George Burns & Gracie Allen.

But if you were to quiz a random old-time radio fan and ask what role Shirley made most famous, we’re confident that the unanimous answer would be “Leila Ransom.”  Mitchell played the flirtatious Southern belle (who hailed from my old stomping grounds of Savannah, Georgia) on The Great Gildersleeve, where she was one of the water commissioner’s (Harold Peary, Willard Waterman) many romantic conquests.  In fact, Leila came close to getting “Thrawk-mahhhhtin” to commit to a state of happily-ever-after, most famously during the 1942-43 season.  Leila came and went in Gildy’s life, often vying with her cousin Adeline Fairchild (played by Una Merkel) for the Great Man’s romantic attention; Shirley played the part to perfection, adding an extra syllable or two to Gildersleeve’s first name with her impeccable Southern drawl.  (Mitchell also used the Southern accent for a character that appeared occasionally on William Bendix’s The Life of Riley, another belle from Dixie who answered to “Louella Lounsberry”…not to mention “Florabelle Breckenridge” on former Gildersleeve actor Hal Peary’s Honest Harold.)

Although Shirley continued with a plethora of radio work, she began to branch out to other mediums by the 1950s.  She had small roles in movies like The Clown (1953) and Desk Set (1957), and in addition to her I Love Lucy appearances made the rounds on I Married Joan, Leave it to Beaver, The Real McCoys and The Adventures of Ozzie & Harriet.  She played Kitty Devereaux, the secretary to John Forsythe’s Bachelor Father for a brief period of time, and was also a semi-regular on Pete and Gladys (as Gladys’ pal Janet Colton), the spin-off from December Bride.  Mitchell also appeared a few times on Please Don’t Eat the Daisies, and was brought in (as cousin Mae Belle Jennings) on Petticoat Junction as a possible replacement for star Bea Benaderet when Bea had health issues (the Junction people went with June Lockhart’s Dr. Janet Craig instead).  Perry Mason, The Beverly Hillbillies, Green Acres and The Dick Van Dyke Show are just a few of the popular television programs on which Shirley guest starred.  She also went back to her radio days in lending her voice to cartoon series like The Roman Holidays and several animated specials based on Cathy Guisewhite’s comic strip creation Cathy.