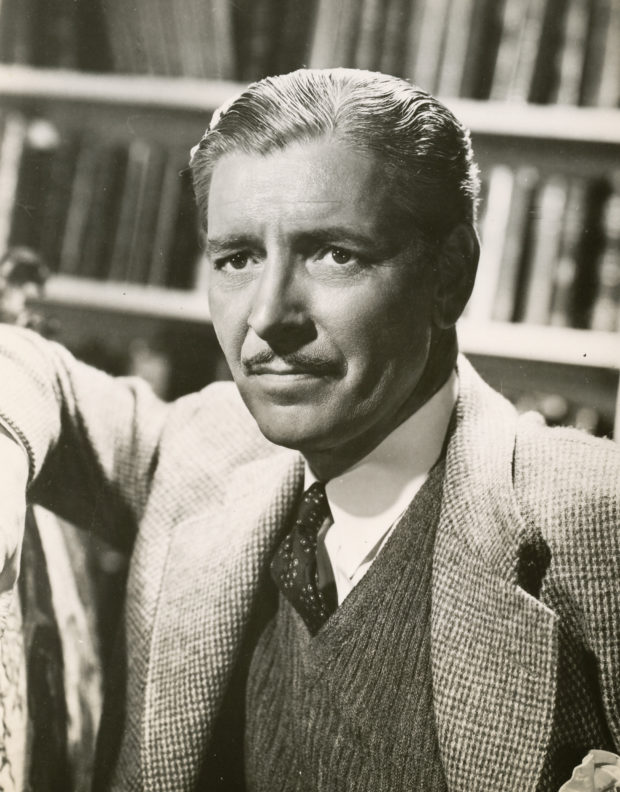 In February of 2012, an auction by Nate D. Sanders Memorabilia successfully sold fifteen Academy Awards Oscars for a total of slightly over $3 million (a record-breaking amount at that time).  The top ticket item was Herman Mankiewicz’s 1941 screenplay statuette for Citizen Kane, which went for $588,455.  But I’m willing to bet that there were a few smiles on the faces of old-time radio fans when the Best Actor Oscar that Ronald Colman won for 1947’s A Double Life sold for $206,250.  Listeners of The Jack Benny Program remember fondly the difficulties experienced by Jack when he was robbed of Ronnie’s Oscar on the legendary March 28, 1948 broadcast (“Your money or your life!”).  That actor, who went temporarily Oscar-less, was born in 1891. In addition to his immensely successful film career, Ronald Charles Colman enjoyed fame on radio in such series as Favorite Story, The Halls of Ivy., and the aforementioned Jack Benny Program.

Young Ronald Colman was born in Richmond, Surrey, England and educated at boarding school in Littlehampton.  (It was here where he first developed his interest in acting.) Colman later considered studying engineering at Cambridge, but he had to abandon his plans. His father, Charles, had passed away in 1907, putting the family in a bit of a financial pinch.  Ronnie took up acting on an amateur basis.

Ronald Colman would take a leave of absence from his clerking job in London’s British Steamship Company to join the London Scottish Regiment in 1909.  Among his fellow soldiers in that same regiment were Claude Rains, Herbert Marshall, Cedric Hardwicke, and Basil Rathbone.  Colman took some shrapnel in his ankle in the Battle of Messines during World War I. He didn’t lose the leg, but he did acquire a limp (which he gamely tried to hide throughout his stage and movie career).  Mustered out of the Army in 1915 due to his injuries, Ronnie recovered sufficiently to start performing on stage by 1916. He appeared in such productions as The Maharani of Arakan (1916), The Misleading Lady (1917), and The Little Brother (1918).

1920 found Ronald Colman in America, where he appeared in the play The Dauntless Three.  He also married his first wife, Thelma Raye, a union that lasted until 1934.  Colman appeared in a string of mostly forgettable stage productions for about two years…until director Henry King caught his performance in La Tendresse and asked him to star opposite Lillian Gish in the 1923 melodrama The White Sister.  The movie would make Ronnie a star, and though he had worked previously in features during his time in Britain, Colman would now entirely abandon the stage for the flickers.  Among his silent movie successes were such feature films as The Dark Angel (1925), Stella Dallas (1925), Lady Windemere’s Fan (1925), Beau Geste (1926), and The Winning of Barbara Worth (1926).

Silent films weren’t able to take advantage of Ronald Colman’s rich mellifluous voice…but with the advent of the talkies, Colman made up for lost time when his first two sound films—Condemned (1929) and Bulldog Drummond (1929)—won him recognition from his peers in the form of a Best Actor nomination.  (Ronnie would later be nominated two more times—for 1942’s Random Harvest and the aforementioned A Double Life, which won him his trophy.)  Colman enjoyed a string of box-office hits throughout the 1930s: Raffles (1930), Arrowsmith (1931), Bulldog Drummond Strikes Back (1934), Clive of India (1935), A Tale of Two Cities (1935), Lost Horizon (1937), The Prisoner of Zenda (1937), If I Were King (1938), and The Light That Failed (1939), just to name a few.

Ronald Colman’s resonant speaking voice was a natural for radio, and one of the first programs on which he regularly appeared was The Circle, a short-lived “talk show” that premiered over NBC Radio on January 15, 1939.  Despite a powerhouse celebrity lineup that included Cary Grant, Carole Lombard, and Groucho & Chico Marx (and later Basil Rathbone and Madeleine Carroll), The Circle departed the airwaves in July of that same year. The program was memorably dismissed by writer Carroll Carroll as “radio’s most expensive failure.”  Colman’s next big radio venture was Everything for the Boys, a dramatic anthology written, produced and directed by radio’s enfant terrible, Arch Oboler.  Premiering over NBC on January 18, 1944, Everything featured a variety of mini-plays that dramatized classic stories and adapted motion picture films…with some originals from Oboler thrown in for good measure.  The collaboration between Colman and Oboler soon soured, and hostilities between the two men made working on the program a nightmare.  It bowed out on June 13, 1944 and was replaced the following week with a musical variety series that eventually became The Dick Haymes Show.

On December 9, 1945, Ronald Colman made the first of many guest appearances on The Jack Benny Program.  The show’s writers came up with the brilliant comic device of having Ronald be Jack’s next-door neighbor. The contrast between the cultured Colman and the vulgar Benny was a recipe for classic comedy. The proceedings were helped immeasurably by adding Ronnie’s second wife (they married in 1938) Benita Hume into the mix.  The Colmans didn’t appear on every broadcast, but made enough visits between 1945 and 1951 to become semi-regulars. The high point of their guest spots occurred on the March 1948 broadcast mentioned in the first paragraph.  When Jack is mugged for Ronnie’s Oscar, he tried to disguise its loss by “borrowing” Oscars from guest stars over the following weeks (like Bing Crosby and Frank Sinatra) in an attempt to avoid Colman’s wrath.

Ronald Colman’s guest appearances on The Jack Benny Program did wonders for his stock in radio.  Favorite Story, a syndicated radio program that had premiered in 1946, brought Ronnie aboard to host the dramatic anthology, and he continued in that capacity until it left the airwaves in 1949.  Colman’s most high-profile radio gig followed not long after; he and Benita Hume were the stars of The Halls of Ivy, a comedy-drama about a small Midwestern college. Created by Fibber McGee & Molly’s Don Quinn, the show aired over NBC from January 6, 1950 to June 25, 1952.  (Ivy would later transition to TV in the fall of 1954 for a single season.)  Colman’s radio resume also includes such favorites as Academy Award Theatre, Arch Oboler’s Plays, Columbia Presents Corwin, Command Performance, The Doctor Fights, The Edgar Bergen-Charlie McCarthy Show, Good News of 1940, The Gulf/Lady Esther Screen Guild Theatre, Hallmark Playhouse, Hedda Hopper’s Hollywood, The Lux Radio Theatre, Maxwell House Coffee Time, The Radio Hall of Fame, Radio’s Reader Digest, Request Performance, The Sealtest Variety Theatre, The Silver Theatre, Suspense (including the classic broadcasts of “August Heat” and “The Dunwich Horror”), The Theatre Guild of the Air, and Theatre of Romance.

By the 1940s, Colman had entered a period of semi-retirement where motion pictures were concerned.  True, he was active with features like Random Harvest (1942), The Talk of the Town (1942; one of my favorites), Kismet (1944), The Late George Apley, and A Double Life (both 1947) — but by the start of the 1950s, he limited his participation to Champagne for Caesar (1950) and The Story of Mankind (1957), his cinematic swan song.  Colman made a few small screen appearances on such shows as Four Star Playhouse and The General Electric Theatre…and even reprised his “next-door neighbor” role on two of Jack Benny’s television shows.  Sadly, acute emphysema took Ronnie in 1958 at the age of 67

In 1960, Ronald Colman received two stars on the Hollywood Walk of Fame: one for his work in motion pictures and the other for television.