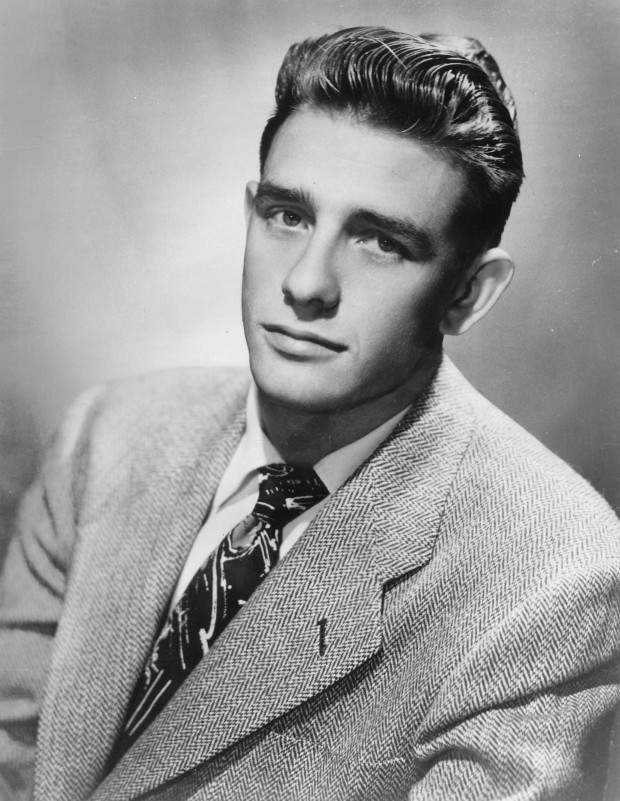 The go-to actor for radio’s squeaky-voiced adolescents was born in Los Angeles, California on this date in 1926. Richard “Dick” Crenna established his bona fides in the aural medium with co-starring roles on such sitcom favorites as A Date with Judy, The Great Gildersleeve…and the series that cemented his stardom, Our Miss Brooks. Crenna would migrate from the radio version to that show’s boob tube cousin, and enjoy a consistent career as both an actor and occasional director to boot.

An only child, Richard was the son of a hotel manager (his mother Edith) and pharmacist (pop Domenick)…and while attending high school, acquired an interest in performing on radio that led him to be cast on a program called Boy Scout Jamboree. Upon graduation, Crenna “did his bit” in World War II as a radioman, where he saw combat duty in both The Battle of the Bulge and in the Pacific Theater. After the war, he attended the University of Southern California to major in English—but continued his work in radio, most famously as Oogie Pringle, the daffy boyfriend of the titular heroine (Judy Foster) on the popular A Date with Judy.

Richard also found steady work on The Great Gildersleeve as Bronco Thompson, the boyfriend of Marjorie Forrester, Gildy’s niece. The two of them later tied the knot in a memorable May 10, 1950 broadcast (available on the Radio Spirits Gildersleeve collection Marjorie’s Wedding). Crenna also appeared occasionally on George Burns and Gracie Allen’s show as a lovesick teenager named Waldo, and made the rounds on such comedy programs as The Fabulous Dr. Tweedy, A Day in the Life of Dennis Day, My Favorite Husband, The Hardy Family and The Harold Peary Show. In later years, Crenna referenced a radio critic who once railed about the plethora of teenage nerds that dominated the airwaves at that time—the actor wasn’t entirely certain if his detractor knew he was playing most of the parts. But Richard wouldn’t be tied down to just juvenile roles; among the other series on which he emoted: The Adventures of the Saint, Broadway’s My Beat, The CBS Radio Workshop, Fort Laramie, Gunsmoke, Have Gun – Will Travel, Night Beat, Romance, Suspense, This is Your FBI, You Were There and Yours Truly, Johnny Dollar.

Be that as it may, it was the teen nerd persona that catapulted Richard Crenna to radio immortality: the role of Walter Denton, Connie Brooks’ student confidant (and co-conspirator) on the popular sitcom Our Miss Brooks. As Walter, Crenna demonstrated immaculate comic timing as the well-intentioned dweeb whose loyalty to his favorite English teacher (played by Eve Arden) often meant entanglement in her battles against autocratic school principal Osgood Conklin (Gale Gordon). Of course, Walter had a vested interest in these situations—he was dating Conklin’s daughter Harriet (Gloria McMillan, Anne Whitfield). Richard made the transition with most of the cast when Our Miss Brooks became a hit on the small screen (save for the series’ last season on TV)…and appeared in the 1956 silver screen adaptation as well.

Richard became so identified as Walter Denton that it presented a few problems when he auditioned for the sitcom that would become his second solid TV success, The Real McCoys. The producers of that iconic hit wanted a more “manly” thespian in the role of Luke McCoy, and not the famous nerd that Crenna made popular on OMB. But Richard demonstrated he had the acting chops to change his image, and enjoyed much success on that program for six seasons. After McCoys, he was ready to try something completely different: an hour-long drama in which he played a state legislator named James Slattery in Slattery’s People. Though the program was one of the most critically-acclaimed offerings of the 1964-65 season, audience response was rather tepid; CBS gave it a reprieve for a short-lived second season before finally throwing in the towel. Slattery’s People did garner two Emmy Award nominations for Crenna for his performance…but the actor would have to wait for his Emmy triumph until 1985, when he won a trophy for the TV-movie The Rape of Richard Beck.

By this point in his career, Richard Crenna was beginning to make a name for himself as a distinguished movie actor as well. He earned praise for his turns in The Sand Pebbles (1966) and Wait Until Dark (1967), and memorably played one of three doomed astronauts in the 1969 film Marooned. His other notable film credits include Breakheart Pass (1975), Body Heat (1981) and The Flamingo Kid (1984); in this latter film he played a flashy salesman who becomes a role model for young Matt Dillon…and in one scene shows Dillon his new remote control television, flipping past a rerun of The Real McCoys in an amusing in-joke. Perhaps the most popular showcase for Richard was his role as Colonel Sam Trautman in the first three movies of the Rambo series (beginning with First Blood in 1982); he would later spoof this character as—wait for it—Colonel Denton Walters in Hot Shots! Part Deux (1993). (I laughed so hard at this when I saw the comedy in a movie theater that my sister threatened to walk out because she was embarrassed.)

While Richard Crenna was appearing on The Real McCoys, he decided to have a go at working behind the camera…and he not only directed a handful of McCoys outings, but installments from such series as The Andy Griffith Show, Lou Grant and The Rockford Files as well, in addition to a number of TV-movies. Richard was never able to duplicate the television series longevity he established on Brooks and McCoys, but he certainly made a go of it with roles on the likes of All’s Fair, It Takes Two, Pros and Cons and Judging Amy—the series on which he had a recurring part (as Jared Duff) before his death in 2003 at the age of 76.