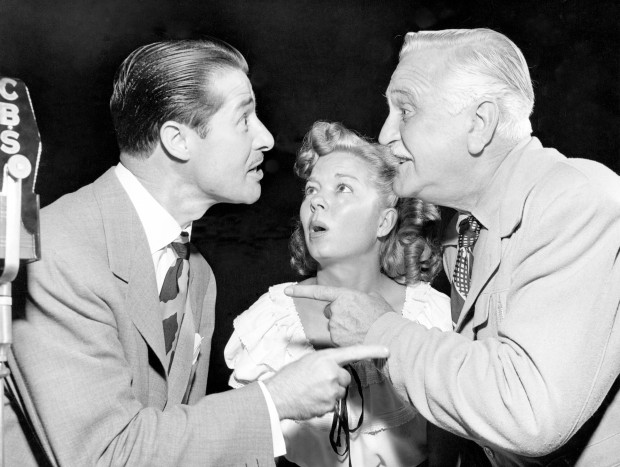 Comedy writer Phil Rapp was born on this date in 1907, and during his long show business career he would probably become best known for creating a constantly squabbling couple played on numerous shows by actor Don Ameche and singer Frances Langford. His son Joel once related that his father’s inspiration for John and Blanche Bickerson sprung forth from the disagreements Rapp often had with his wife Mary, a former vaudeville dancer. “I’ve hidden under a lot of tables in my day,” cracked Joel as he pointed out that the Rapp’s quarrels frequently went beyond the bedroom environs established by “The Bickersons,” spilling out into public view. “My father would scurry off to the typewriter while the dialogue was still fresh,” Joel confessed…and old-time radio comedy fans are the richer for it.

Philip Rapp, a native of jolly old England, emigrated to the U.S. with his Austrian-born parents when he was just a teen, and he set his sights on an entertainment career by first becoming a novelty dancer. But Phil discovered he possessed a flair for the funny, and one of his first jobs involved selling jokes to his fellow vaudevillians. By 1932, he had moved to Hollywood and joined the writing staff of Eddie Cantor’s show; Rapp later moved up to take over the directorial duties for Banjo Eyes’ Pebeco program in 1936.

Phil Rapp also played a part in establishing Ziegfeld Follies legend Fanny Brice as a radio comedy star. Rapp developed Fanny’s “Baby Snooks” character, which she began playing on the CBS program Ziegfeld Follies of the Air in 1936. A year later, Brice transferred the bratty kid to the Good News of 1938 series on NBC and, with her foil Hanley Stafford (as Lancelot “Daddy” Higgins), provided comic relief for a celebrity-studded show that featured the crème de la crème of MGM’s “more stars than there are in heaven.” Both Brice and MGM’s resident comic actor Frank Morgan supplied the laughs on Good News, and teamed up for four years of Maxwell House Coffee Time beginning in 1940. (Maxwell House was the original sponsor of Good News, and though Fanny and Frank were the stars of Coffee Time they worked in separate sections of the show.) Fanny would then headline The Baby Snooks Show from 1944 until her death in 1951.

Phil used his Cantor connections to contribute material to the comedian’s 1936 movie musical comedy Strike Me Pink, and began to get jobs working on such films as Start Cheering (1938—with Jimmy Durante and the Three Stooges) and There’s Always a Woman (1938). In addition, Rapp entertained a most felicitous collaboration with entertainer Danny Kaye, writing the screenplays for two of Kaye’s most successful comedies: Wonder Man (1945) and The Inspector General (1949). His other cinematic contributions number New Faces of 1937, Ziegfeld Follies (1945), The Secret Life of Walter Mitty (1947—another Kaye film), Ain’t Misbehavin’ (1955) and Wild and Wonderful (1964).

Of Philip Rapp’s many contributions to show business, his creation of the energetically argumentative John and Blanche Bickerson is perhaps his longest-lasting. “The Bickersons” first appeared on an NBC comedy-variety series entitled Drene Time in 1946, which featured actor (and former Edgar Bergen-Charlie McCarthy announcer-straight man) Don Ameche in the role of a harried husband who just wants to get a good night’s sleep. This is an impossible task, for he shares his bed with his wife Blanche—played by vocalist Frances Langford—who’s determined to have her say. The Bickersons sketches also featured an up-and-coming Danny Thomas in the role of Blanche’s ne’er-do-well brother Amos. The following year, the battling couple moved to CBS’ The Old Gold Show, where they continued their nocturnal give-and-takes on a series that also featured Frank Morgan, musician Carmen Dragon and announcer Marvin Miller.

The Bickersons would later resurface in sketches on Edgar Bergen’s program (with Marsha Hunt replacing Langford as Blanche) and had a brief run as a stand-alone sitcom in 1951 (with Lew Parker as John B.). The 1951 radio Bickersons followed shortly after John and Blanche briefly became TV stars on DuMont’s Star Time, on which Phil Rapp not only wrote the sketches but directed as well. Star Time was a launch pad for Rapp’s debut into boob tube society. Phil would go on to direct and produce the television adaptation of Topper (he was also the supervising story editor) and the short-lived Wally Cox series The Adventures of Hiram Holiday. Rapp’s TV credits also include I Married Joan, The Tab Hunter Show, Summer Playhouse and My Favorite Martian. Philip continued to have great success with The Bickersons in the form of TV commercials and best-selling records (in addition, he authored a “Bickersons” play in Match Please, Darling) before his passing in 1996.