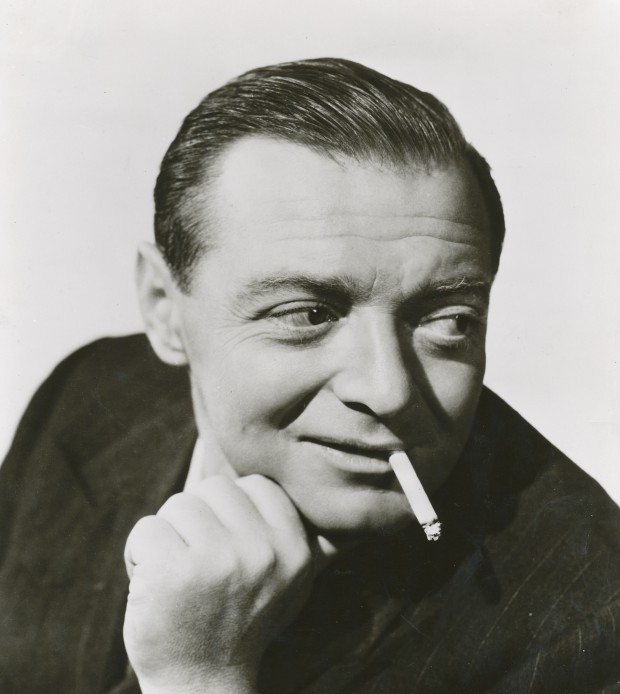 On this date in 1904, a son was born to Alajos Löwenstein and Elvira Freischberger in an Austria-Hungarian village that is now located in present-day Slovakia. His name was László Löwenstein…but we’re much more familiar with his stage name: Peter Lorre. Audiences are also well acquainted with his status as a beloved movie character actor and horror film icon.

Lorre’s flair for the buskin began at the age of 17. He did a great deal of stage work as a young actor in Vienna, and eventually made his way to Berlin where he earned his acting chops in plays like Bertolt Brecht’s Mann ist Mann. It was director Fritz Lang who would make Peter an international movie star, however; Lang cast Lorre in the challenging role of a child killer in his 1931 suspense masterpiece M. It would be a few years, however, before Lorre would come to America to work on the movies that brought him his greatest acclaim. Director Alfred Hitchcock helped Peter along by assigning him a pivotal role in 1934’s The Man Who Knew Too Much, and used him again two years later in his espionage thriller Secret Agent.

Peter’s first Hollywood venture was Mad Love (1935), which once again featured him as a creature of menace in the role of a maniacal doctor obsessed with an actress played by Francis Drake. The actor would eventually sign a contract with 20th Century-Fox, and appear in support in such vehicles as Nancy Steele is Missing! (1937) and Lancer Spy (1937). The movies that allowed him to play a starring role were those based on Asian spy-sleuth Mr. Moto, a creation of author John P. Marquand. Several of the Moto films—notably Thank You, Mr. Moto (1937)—featured written contributions by Wyllis Cooper, whom old-time radio fans know from Lights Out and the later horror anthology Quiet Please.

Initially excited about the Mr. Moto series, Lorre later became disenchanted with the franchise and left Fox to become a freelancer. This move resulted in some of Peter’s most memorable film roles, notably in such programmers as Stranger on the Third Floor (1940)—which some consider to be the first film noir—and The Face Behind the Mask (1941). But it was signing with Warner Brothers that proved to be Lorre’s shrewdest move, allowing him to appear in the two movies for which he is inarguably best remembered today. In The Maltese Falcon (1941), Lorre played the effeminate Joel Cairo, one of several disreputable characters who want to hire gumshoe Sam Spade (Humphrey Bogart) to look for the titular prize. After Falcon, Peter had a small but pivotal role in Casablanca (1942) as Ugarte, the lowlife whose handing off of “the letters of transit” to café owner Rick Blaine (also Bogart) pretty much sets the wheels of the plot in motion. Lorre would work with Bogart on two more Warner films, All Through the Night (1941) and Passage to Marseille (1944), and the two men later reunited for a third film with Beat the Devil (1953).

Falcon and Casablanca also paired Lorre up with character actor Sydney Greenstreet. The two actors would appear in a total of nine films together, notably 1944’s The Mask of Dimitrios—which features Peter in a rare heroic role (even if Sydney does get top billing). The underrated Three Strangers (1946) finds Peter, Sydney and Geraldine Fitzgerald playing a trio of disparate individuals brought together by a sweepstakes ticket.

Peter Lorre demonstrated an amazing range as an actor: he plays a sympathetic character in The Constant Nymph (1943), and a darkly comic one in the 1944 adaptation of the stage play Arsenic and Old Lace. But by and large, Lorre was usually called on to tackle parts that harkened back to his M and Mad Love days. His Face Behind the Mask director Robert Florey, for example, memorably cast him as the villain in the 1946 horror oddity The Beast with Five Fingers.

After World War II, Peter Lorre’s film career slowed down and he began to concentrate more on stage work…plus he found a good friend in radio. He was no stranger to the aural medium; Lorre emoted frequently on such series as Inner Sanctum and Suspense, and poked fun at his screen image with such radio funsters as Abbott & Costello, Amos ‘n’ Andy, Jack Benny and Bob Hope. (Bob would later use Peter—along with Lon Chaney, Jr.—as a formidable knife-wielding henchman in one of his funniest comedies, 1947’s My Favorite Brunette.) For the Armed Forces Radio Service, Peter was one of several hosts of Mystery Playhouse, a show comprised of repeats of such popular stateside series such as Mr. District Attorney, Mr. and Mrs. North and The Molle Mystery Theatre (the commercials on these shows were edited out for the benefit of the servicemen). In the summer of 1947, Peter was the star attraction on Mystery in the Air, an underrated anthology series featuring classic horror tales like “The Marvelous Barastro” and “The Horla.”

By the 1950s, Peter Lorre was an in-demand character actor in such film favorites as 20,000 Leagues Under the Sea (1954) and Silk Stockings (1957). He was also gravitating to guest roles on such popular TV series as Alfred Hitchcock Presents (in the classic “Man from the South”), Rawhide, Wagon Train and Checkmate. His appearance in an episode of Route 66, “Lizard’s Leg and Owlet’s Wing,” allowed him to mock his well-honed screen image along with his fellow horror fraternity brothers Boris Karloff and Lon Chaney, Jr. Peter was also featured in several horror films released by American International Pictures in the 1960s, gracing Tales of Terror (1962) with a marvelous interpretation of Edgar Allan Poe’s “The Cask of Amontillado,” and giving a hilarious performance as Jack Nicholson’s skeevy sorcerer father in The Raven (1963). His last feature film appearance was in Jerry Lewis’ The Patsy (1964); Peter Lorre passed away that same year at the age of 59.