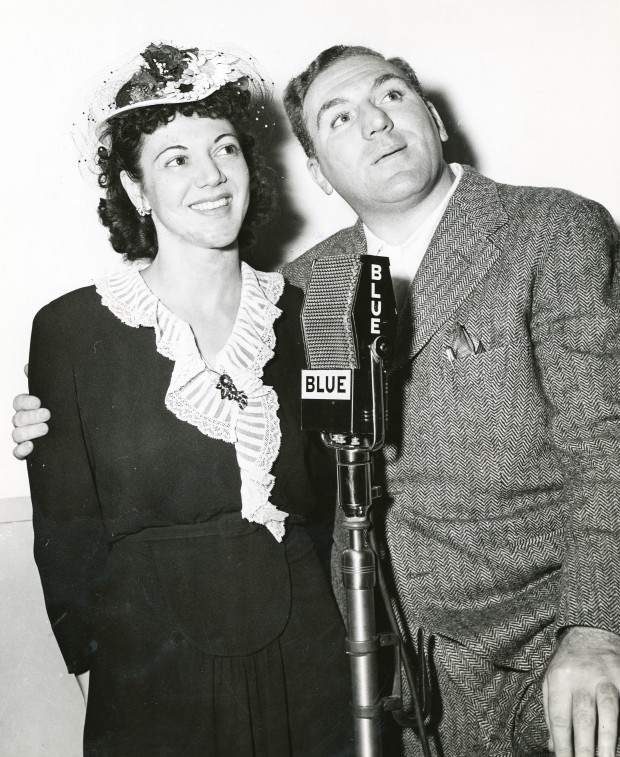 The untimely death of “platinum blonde” Jean Harlow at the age of 26 was devastating news to moviegoers…but since the motion picture business is a business, MGM (Harlow’s employer) soldiered on by completing Jean’s final movie, Saratoga (1937), with Jean’s body double, Mary Dees.  Filming Dees from behind could go a long way towards covering for Jean’s incomplete scenes…but Mary’s voice wouldn’t pass muster—it was much too high.  So, MGM called upon a starlet who had been working for the studio as a voice actress to do her flawless impression of Harlow…and to this day, it’s a challenge for classic film buffs to pick out which scenes feature the authentic voice of Jean, and which sequences depended on the amazing vocal talent born on this date in 1910: Paula Winslowe.

Paula Winslowe hailed from Grafton, North Dakota…and if anyone can claim responsibility for her interest in an acting career, it was her husband (and childhood sweetheart) John Sutherland.  John had been captivated by movies since he was a little shaver, and wanted to “follow the yellow brick road” to Tinsel Town to try his luck in “the flickers.”  Sutherland never did achieve his dream of becoming the next Cecil B. DeMille…but he did eventually manage to make a good living as a writer, director, and producer of educational film shorts (with captivating titles like A is for Atom [1953] and It’s Everybody’s Business [1954]).

As for Mrs. Sutherland…well, her arrival in The Golden State coincided with the motion picture industry’s revolution of “talking pictures.”  Many movie actresses—while certainly photogenic—often had voices at complete odds with their camera-friendly looks.  That’s why “voice doubles” were needed, and since Paula demonstrated some acting talent (as well as an ability to carry a tune when necessary) she was pressed into service to dub many performers.  “Voice doubling” may not have led to stardom (these actresses often went uncredited), but it kept the red ink away from the checkbook register.  Sadly, this work began to dry up when a series of articles criticizing the practice began to appear in fan magazines.

Paula Winslowe had a Plan B.  Though she studied dramatic acting in New York for a year, intending to work on stage, the growing medium of radio guaranteed work for voice actresses.  Winslowe soon garnered gainful employment with KHJ, the Don Lee network’s Hollywood flagship station.  KHJ would feature Paula in many of their dramatic productions—she can even be heard on a surviving December 30, 1936 broadcast commemorating the merger of Don Lee with the larger Mutual network.  But before that coupling, Don Lee served as the West Coast outlet for CBS…allowing Paula to appear regularly on Bing Crosby’s Woodbury Program in the show’s dramatized commercials (hawking Woodbury Soap).  Winslowe accepted every one of these jobs (she worked with notables like Louella Parsons on Hollywood Hotel and Alexander Woollcott on The Town Crier), and later became a fixture on The Lux Radio Theatre (more soap!) in the same capacity. In addition, Big Town (with a regular role as Miss Foster, Steve Wilson’s secretary), The Shadow of Fu Manchu, The Texaco Star Theatre (hosted by John Barrymore), and The Silver Theatre were just a few of the other programs that availed themselves of Paula’s services.  She also appeared on comedy broadcasts headlined by the likes of Eddie Cantor, Joe E. Brown (she portrayed Jill, Brown’s sweetheart), George Burns & Gracie Allen, and Edgar Bergen.

Before giving her all to radio, Paula Winslowe did one more notable bit of film work: she provided the voice of Bambi’s mother in the 1942 Walt Disney classic Bambi (her husband John also worked in the movie…as the adult Bambi!).  (Though if you look and/or listen sharply enough, you’ll spot Winslowe in the auction scene in 1959’s North by Northwest.)  Radio was good to Paula; she appeared regularly on such anthologies as The Cavalcade of America, Encore Theatre, Escape, The Hallmark Hall of Fame, Hollywood Sound Stage, The Railroad Hour, Romance, The Screen Guild Theatre, and Stars Over Hollywood.  Winslowe later became a member of Elliott Lewis’ “stock company,” with choice roles on Lewis-helmed series like Suspense, Broadway’s My Beat, The CBS Radio Workshop, Crime Classics, and On Stage.  (Her association with “Mr. Radio” continued even into the 1970s, when she worked on his attempts to revive radio drama, including The Hollywood Star Theatre and The Sears Radio Theatre.)

If Paula Winslowe had a signature radio role—it’s unquestionably that of Margaret “Peg” Riley, the long-suffering spouse of good-hearted slob Chester A. Riley (William Bendix) on the long-running sitcom The Life of Riley.  Paula was on that radio program for its entire run from 1944 to 1951…but incredibly enough, she was bypassed to reprise her radio gig in the 1949 movie adaptation.  Rosemary DeCamp got the part in both the feature film and the first attempt to bring Riley to TV screens later that year.  (To add insult to injury, Marjorie Reynolds tackled the role of Peg in the 1953-58 boob tube version that starred Bendix, the original radio Riley.)  Winslowe settled for playing Martha Conklin, spouse of Madison High principal Osgood Conklin (Gale Gordon), when radio’s Our Miss Brooks made the jump to the small screen (Paula also played Martha on radio several times).  Her Life of Riley bona fides landed her work on such radio sitcom favorites as The Great Gildersleeve, A Day in the Life of Dennis Day, The Halls of Ivy, The Adventures of Ozzie & Harriet (she also appeared on the TV version on numerous occasions), and Fibber McGee & Molly…while also emoting on dramatic hits such as Mayor of the Town, The Line Up, Gunsmoke, Frontier Gentleman, and Yours Truly, Johnny Dollar.

Paula Winslowe kept busy as radio began to cede attention to its newer sibling, television.  On the small screen, she guest-starred on favorites like I Love Lucy, December Bride, The Bob Cummings Show (Love That Bob), Father Knows Best, The Gale Storm Show (Oh Susanna!), The Life and Legend of Wyatt Earp, Perry Mason, The Real McCoys, and 77 Sunset Strip—just to name a few of the many.  (She would also resurrect her radio vocal talents on a few episodes of the primetime animated series The Flintstones.)  Paula’s final onscreen credit was in an episode of Run for Your Life, and in the well-chosen words of my Radio Spirits colleague Elizabeth McLeod: “Paula Winslowe kept working in radio as long as there was radio to work in.”  Winslowe passed away in 1996 at the age of 85.