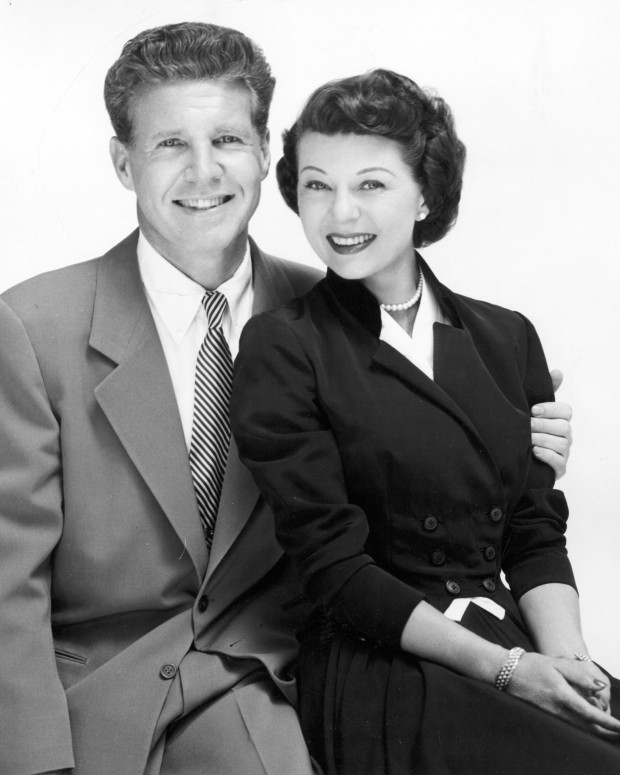 In 1930, Oswald George Nelson—who would have been celebrating his birthday today—graduated with a law degree from Rutgers University in New Jersey, and was ready to hang out his shingle for business.  Sadly, the world would soon know one less lawyer…though there are no doubt a few of you reading this who are remarking that this is not necessarily a bad thing.

For you see, Ozzie Nelson already had a successful sideline as a bandleader — a gig he’d had since the age of 14, earning the money he needed to pay his way through college.  So, Nelson decided to stick with that profession, a choice that paid off tremendously a few years later.  In 1932, he added young female vocalist Peggy Lou Snyder to the band…known by that time by her professional handle, Harriet Hilliard.  Ozzie had seen Harriet in a 1932 film short (The Campus Mystery), and that prompted his decision to ask her to join the band.  The young couple established a musical trademark by tossing lyrics back and forth in their songs in a nonchalant, conversational manner…very innovative for the time.  On October 8, 1935, Ozzie made certain that Harriet wouldn’t be leaving the band any time soon by making her Mrs. Ozzie Nelson.

By the time Ozzie & Harriet tied the knot, they were already popular radio stars as supporting headliners on The Baker’s Broadcast — the program that starred comedian Joe “Wanna buy a duck?” Penner.  Joe quit the series in 1935 (a very unwise career move on his part) and the show was taken over by Robert L. Ripley of “Believe It or Not” comic strip fame.  After the program left the airwaves in 1937, the Nelsons moved to Hollywood to take advantage of the motion picture opportunities there (Harriet was by this time establishing herself as an actress in vehicles such as Follow the Fleet).  The pair soon landed another radio job in the fall of 1941 on The Raleigh Cigarette Program…starring “MGM’s star clown,” Red Skelton.

Harriet’s role on the Skelton show was to provide a voice for Red’s female characters, like Daisy June and the mother of “Junior, the mean widdle kid.”  But, it wasn’t too long after the show’s premiere that Ozzie started writing himself into the sketches as well.  Both Nelsons were also prominent in films around that time, appearing together in vehicles like Sweetheart of the Campus (1941) and Take It Big (1944).  But, the Skelton gig would soon vanish.  Red had to leave radio at the end of the 1943-44 season, because he’d been called up for military service.  So, on the advice of Fibber McGee & Molly creator Don Quinn, Ozzie and Harriet successfully pitched the idea of a sitcom entitled The Adventures of Ozzie & Harriet to CBS, which premiered the show on the day of their ninth anniversary in 1944.

The Adventures of Ozzie & Harriet was an immediate hit, though in its early years many of its supporting characters were a little too wacky, clashing with the tone of the program that attempted to realistically portray (with only slight exaggeration) “America’s favorite young couple.”  Part of what allowed Ozzie & Harriet to move away from this vaudeville style of comedy was the addition of the Nelsons’ sons, David and Ricky, to the cast in 1949.  Ozzie wasn’t particularly wild about having his progeny enter show business at such a young age (he had used child actors to portray the boys up until that time), but relented after the Nelson sons protested that Bing Crosby had used his sons when he guested on a broadcast in December of 1948.

The Adventures of Ozzie & Harriet ran for four years on CBS Radio, moved to NBC for a season, then switched to ABC for its final five years on the air.  The last two years of the radio program overlapped with the TV version of the family comedy, which premiered in the fall of 1952 after a moderately successful “pilot” was released that same year: Here Come the Nelsons.  The TV Ozzie & Harriet would run for fourteen seasons, from 1952 to 1966—a situation comedy record, and one that allowed home audiences to watch the family (particularly David and Ricky) grow up before their very eyes.

One of the best-remembered joke references involving Ozzie & Harriet had to do with Ozzie’s occupation.  Harriet herself brought down the house on a Tonight Show appearance with her husband in the 1970s when she asked, “Just what is it you do for a living?”  Ozzie always alibied that most of the TV episodes supposedly took place on the weekend, when he wasn’t at work.  On radio, however, he was still at his bandleader’s job – and in the Here Come the Nelsons movie he worked for an ad agency!  In reality, Ozzie was one of TV’s first “auteurs”—he supervised every aspect of the program as actor, director, producer and (uncredited) writer.