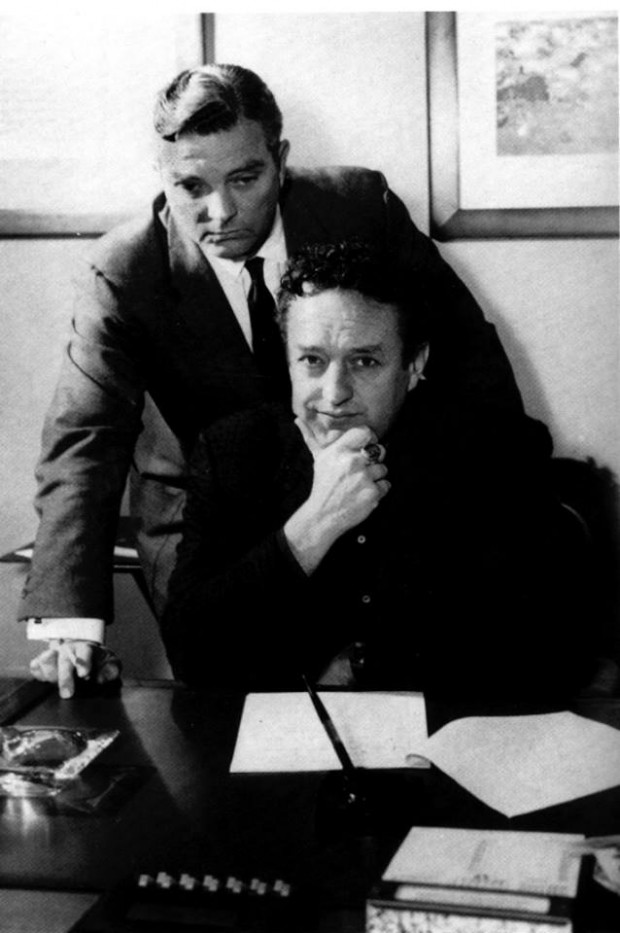 One of old-time radio’s most important—and inarguably, most creative—director-producers was born in 1916 on this date. A native of Pasadena, CA, Norman Macdonnell would use his experiences during World War II—he was among the many who stormed the beaches at France’s Normandy Beach on D-Day—throughout his distinguished radio and television career. He was hired by CBS as an assistant director in the mid-1940s, and quickly worked his way up to the ranks of director, guiding such programs as The City and the classic adventure anthology Escape.

Escape was a most prestigious assignment for Macdonnell. Produced by William N. Robson, Escape was kind of a neglected “kid sister” to the more popular Suspense series (which Norm Macdonnell later worked as a director during the 1949-50 and 1953-54 seasons), but that certainly didn’t mean that it measured any less in terms of quality. Escape told tales of “high adventure” and, though it may not have possessed the star wattage of “radio’s outstanding theatre of thrills,” it featured powerhouse acting from the true professionals in the medium: artists who hailed from what was commonly referred to as “Radio Row.” Performers such as Parley Baer, Harry Bartell, William Conrad, Hans Conreid, John Dehner, Lawrence Dobkin, Sam Edwards, Jeanette Nolan and Vic Perrin were just a few of the many who plied their trade on the series and, not coincidentally, these same thespians would work on future Macdonnell-supervised series as well.

Norm was also made director-producer of The Adventures of Philip Marlowe, a show that had originally aired on NBC in the summer of 1947 as a replacement for The Bob Hope Show—with actor Van Heflin in the role of Raymond Chandler’s literary fictional shamus. When CBS resurrected Philip Marlowe in the fall of 1948, Gerald Mohr had taken over as the detective—something that pleased its creator (Chandler wasn’t a fan of Heflin’s interpretation), who remarked that Mohr’s gumshoe “at least packed personality.” The Adventures of Philip Marlowe was broadcast on the Tiffany network for two seasons (and a final re-appearance in the summer of 1951). I’ve argued with many about whether Mohr was the right actor for the job (I think Mohr was strongest in supporting parts), but the show remains important for what it ultimately brought about. CBS chairman William S. Paley was a Marlowe fan, and suggested to both Norm and CBS director of programming Harry Ackerman that they develop a “Philip Marlowe in the Old West.”

That show would eventually reach the airwaves as Gunsmoke, Macdonnell’s best-known contribution to Radio’s Golden Age. Even before its debut on April 26, 1952, Norm was laying the groundwork for the phrase he would be credited for coining: “adult western.” He did so in tandem with writer John Meston, who had contributed a script to Escape (broadcast on December 22, 1950) entitled “Wild Jack Rhett.” Another building block in the creation of Gunsmoke was “Pagosa,” a script also penned by Meston and broadcast on August 6, 1951 on radio’s Romance, a series on which Macdonnell also toiled as director-producer. With Gunsmoke, both Macdonnell and Meston ushered in a new breed of radio western that was a far cry from the juvenile adventure days of The Lone Ranger and Wild Bill Hickok. The stories were depicted with a gritty realism, where happy endings were scarce. Matt Dillon, the show’s “hero” (portrayed by Bill Conrad), was a man whose devotion to doing a tough job could make him unsympathetic at times…but all-too-human as well.

The success of Gunsmoke led eventually to a television adaptation…and CBS, who owed the program’s popularity to the hard work of Macdonnell, writer Meston and the superlative radio cast and crew, decided to put Norm in charge of the small screen version as well. I’m kidding, of course; they handed the TV show’s reins over to Charles Marquis Warren (who later became the creator of TV’s Rawhide) for the program’s inaugural season (though, wisely, they brought Meston over as story editor) before promoting Macdonnell (who was the associate producer in Season One) to the job in Gunsmoke’s sophomore season. Is it any wonder that the second season is when the show began its phenomenal run of audience popularity—appearing in the Top Ten before becoming #1 in the Nielsen ratings from 1957-61?

While Macdonnell was seated on the sidelines as Warren supervised his “baby,” the director-producer created a second classic radio western in Fort Laramie. Laramie, a series that depicted the harsh and often challenging experiences of soldiers on a U.S. Army post in the 1880’s, utilized many of the performers who appeared on Gunsmoke, and its creative team as well. Sadly, it lasted barely a season – but it did provide future generations with truly compelling radio. Macdonnell was also in charge in the early days of Have Gun – Will Travel when the hit TV series enjoyed a brief transition to radio from 1958 to 1960.

Norm’s stint as producer of TV’s Gunsmoke lasted until the end of the 1964-65 season; the show had dipped substantially in the ratings, and it was thought that some “new blood” would revitalize the program’s fortunes (as it turns out, all Gunsmoke needed was a new time slot…which propelled the warhorse back into TV’s Top Ten). Norm worked on The Kraft Suspense Theatre for a season, but it’s unquestionably his work on The Virginian that’s as accessible to audiences today as Gunsmoke. Norm served as the executive producer of TV’s first ninety-minute oater until The Virginian ended its run in 1971 (as The Men from Shiloh); during that time he also produced The Road West, a western that ran briefly in the 1966-67 season and starred Barry Sullivan as the patriarch of a pioneer family headed for the Kansas territory. (Perhaps they ran into Marshal Dillon on their way out there?)

Norman Macdonnell died on November 28, 1979 at the age of 63. His work in radio is defined by a stamp of quality that modern-day listeners cannot ignore: Escape, Suspense, Philip Marlowe, Romance, Fort Laramie and of course, Gunsmoke. Macdonnell also worked on such series as The Lux Radio Theatre and The Bakers’ Theatre of Stars, and indulged his lighter side on the likes of Life with Luigi, Honest Harold (The Hal Peary Show) and Rogers of the Gazette.