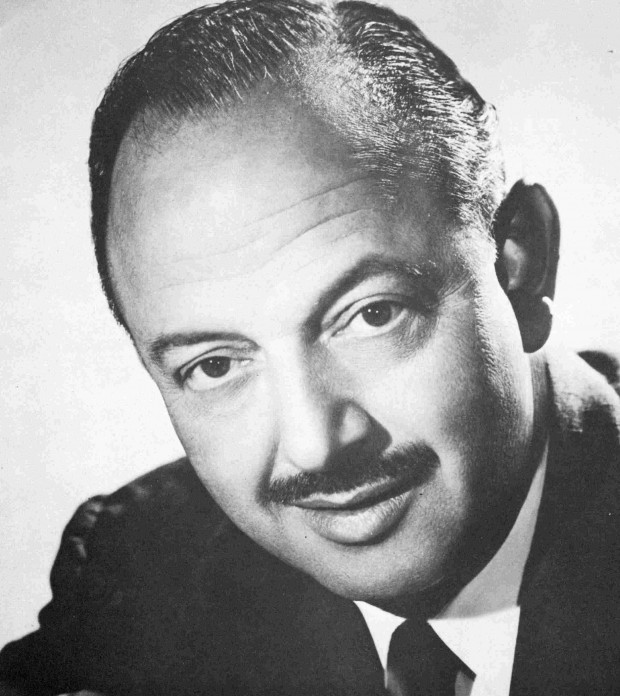 In the 1949 Looney Tunes short Curtain Razor, cartoon star Porky Pig channels his inner Major Bowes by auditioning acts at a talent agency.  One client, a turtle, brags that he is “the man of a thousand voices”—and goes through his repertoire (including Lionel Barrymore and Bugs Bunny) for the porcine agent.  The only problem is: Porky counted 999 voices…and so the turtle goes on his way, promising to come back when he remembers the one he missed.

I’ve often imagined that Mel Blanc—who would be celebrating his birthday today, and was literally known as “the man of a thousand voices”—had a similar problem.  Mel voiced so many characters for radio, television, movies and animated cartoons that it had to be impossible to count them all…and even then, I’m certain he would have passed one-thousand many times over.

He was born Melvin Jerome Blank in San Francisco in 1908 to parents Frederick and Eva.  Mel later told the story that he changed the spelling of his last name to “Blanc” at the age of sixteen because an instructor had chided him, telling him he would never amount to anything (and would, in essence, live out the embodiment of “blank”).  This teacher must’ve had it in for Mel, because even at the age of ten the youngster demonstrated his amazing talent for dialects and mimicry.  Blanc dropped out of school in ninth grade, and soon landed a job leading an orchestra (becoming the youngest conductor at that time at age 17).  Mel went on to discover vaudeville and radio.  In 1927, he began working as a voice artist for station KGW on their Hoot Owls program.

Mel met and married his wife, Estelle Rosenbaum, a year after he arrived in Los Angeles in 1932.  The two of them then moved to Portland, Oregon where they performed in (and co-produced) a local comedy show for KEX entitled Cobwebs and Nuts.  Estelle kept suggesting that Mel was ready for bigger things, so the couple relocated back to Los Angeles in 1935. A successful audition got him a job at Warner Bros.-owned KWFB.  Not long after that, Mel was hired to be the voice of radio comedian Joe Penner’s pet duck “Goo Goo” (the fowl that the comic was always referring to when he asked people “Wanna buy a duck?”).

Blanc’s association with KWFB proved most lucrative, because – as a Warner property – it got his foot in the door at the company’s animation department, which at that time was run by Leon Schlesinger.  Schlesinger planned to use Blanc as the new voice of the cartoon studio’s big star, Porky Pig, after a successful tryout.  Porky was distinguished by his habit of stuttering and, in the early years, his voice was supplied by an actor named Joe Daughtery…who really did stutter.  Unfortunately for Joe, he wasn’t able to control it…and that ran into money as far as recording sessions went.  So, beginning with Porky’s Duck Hunt (1937), Mel Blanc was the new voice of Porky Pig…and he would go on to voice just about every major star to come of the Warmers stable: Bugs Bunny, Daffy Duck, Tweety, Sylvester, Foghorn Leghorn, Pepe le Pew, Speedy Gonzales…and so many more.

Mel soon became so invaluable to the Schlesinger studio that when he had the temerity to ask for a raise, the notoriously tight-fisted Leon said “nothing doing”—but agreed to give Mel a credit in the cartoons that read: “Vocal characterizations by Mel Blanc.”  And, that was the only calling card Blanc needed to open doors in radio for him from that moment on.  He worked on many of the major shows: Fibber McGee & Molly, Burns & Allen, Abbott & Costello, Judy Canova, etc.  He also landed the biggest prize of them all: The Jack Benny Program.

In his early years on the Benny show, Mel was mostly a human sound effect.  He provided the growls of Jack’s pet polar bear Carmichael (the one that ate the gas man), and the wheezing of Jack’s dilapidated Maxwell.  As Mel would later tell it, one day he summoned up the courage to tell his boss: “Mr. Benny…I can talk, too.”  Jack instructed the writers to let him do so; he played minor characters from a baseball announcer (“Greenberg’s on third”) to an exasperated sales clerk to Polly, Jack’s parrot.  Blanc’s most substantial role was Professor LeBlanc, Jack’s long-suffering violin teacher, who would shout with joy (and sing La Marseillaise) whenever his inept pupil’s hour-long lesson was over.  (Of course, I can’t leave out Sy, the Little Mexican and the train station P.A. man who announced: “Train now leaving on track five for Anaheim, Azusa and Cuc…amonga!”)

At the height of his popularity on the Benny program, Mel—like fellow cast members Phil Harris and Dennis Day—got the opportunity to strut his stuff in a solo venture with The Mel Blanc Show, which premiered on CBS Radio on September 3, 1946.  Using his normal voice, Mel played a character with the same name: a man who ran a fix-it shop…and who may have been the most inept handyman in popular culture until Emmett Clark was introduced on TV’s The Andy Griffith Show.  (Mel also played a dual role as Zookie, the assistant who stuttered strangely like a certain Warner Bros. cartoon pig.)  Despite a first-rate supporting cast that included Mary Jane Croft, Joe Kearns, Alan Reed, Jim Backus and Bea Benaderet, The Mel Blanc Show wasn’t consistently amusing and it lasted but a single season.  The most memorable thing about the series was the Loyal Order of Benevolent Zebras lodge that Mel belonged to, where he and “Mighty Potentate” Mr. Cushing (Hans Conried) would greet one another with “Ugga-ugga-boo, ugga-boo-boo-ugga.”  (Blanc later adopted this bit of silliness into a hit record with Spike Jones.)

It would be no small exaggeration to say that Mel Blanc was not only one of radio’s strongest second bananas, but he was an essential—maybe the most essential—player in the voice artist industry.  Television opened up even more doors for Mel: he became a semi-regular on Jack Benny’s show when it transitioned to the small screen, and later went to work for Hanna-Barbera where he voiced Barney Rubble and Dino on The Flintstones, Cosmo Spacely on The Jetsons, and characters as varied as Hardy Har Har, Droop-a-long and Secret Squirrel.  In the ‘70s and ‘80s, Mel could still be heard on Saturday mornings supplying the voices of Speed Buggy, Captain Caveman and Heathcliff.

As you can see, it’s a Herculean task crediting all the characters voiced by the incomparable Mel Blanc (I haven’t even scratched the surface), whose death in 1989 left a tremendous void in the entertainment industry.  (As Leonard Maltin once observed: “It is astounding to realize that Tweety Bird and Yosemite Sam are the same man!”).