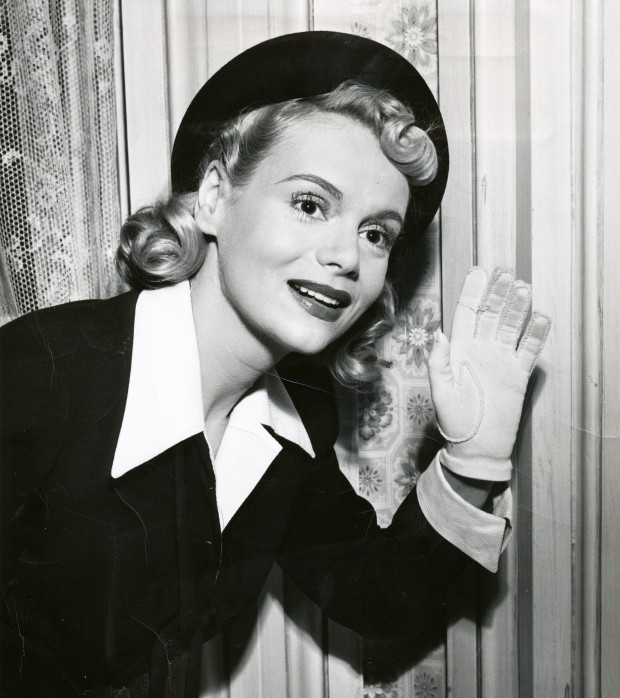 The actress born Katherine Elizabeth (Marie) Wilson on this date in Anaheim, California is an example of what show business types like to call an “overnight sensation.” And to think—it only took thirty-one years to accomplish this feat. Marie Wilson had been working in motion pictures since 1934; the only setback was that many of these vehicles were strictly B-picture affairs, titles with which only a die-hard movie buff would be familiar. Wilson’s stock in the entertainment industry would change in a New York minute (if you’ll pardon the pun) with the April 11, 1947 premiere of a CBS Radio sitcom created by “reformed introvert” and gag writer Cy Howard: My Friend Irma.

Before achieving her future destiny as America’s favorite “dumb blonde,” Marie Wilson paid her dues with uncredited parts in films like the Laurel & Hardy operetta Babes in Toyland (1934) and the Thelma Todd-Patsy Kelly short Bum Voyage (1934). Being in motion pictures was a lifelong ambition for the young Marie, who had set her sights on an acting career when her family moved to Hollywood after the death of her father. Educated at the Miss Page School and the Hollywood Cumnock School for Girls, Wilson moonlighted as a salesgirl at a department store while looking for work in movies. A chance meeting with director Nick Grinde proved to be the starlet’s big break. He married her and cast her in several of his movies (the aforementioned Hal Roach Studios films, plus Ladies Crave Excitement and Public Wedding). He also secured her a contract with Warner Brothers, where she started to turn heads in such vehicles as Colleen (1936), Satan Met a Lady (1936) and Boy Meets Girl (1938).

Marie’s last film for Warners was The Cowboy Quarterback (1939); after that, she freelanced at several studios while at the same time appearing on stage with comedian Ken Murray as a stooge in his successful “Blackout” stage revues of that era. Her film credits at this time include Broadway (1942), Shine On, Harvest Moon (1944), Music for Millions (1944) and The Private Affairs of Bel Ami (1947). And then came My Friend Irma, a situation comedy created by writer Cy Howard—which cast Marie as the dizzy flaxen-haired roommate of the more sensible and down-to-earth Cathy Lewis; both women were secretaries sharing an apartment in New York City, with their lives populated by an array of memorably eccentric characters. (If you don’t examine it too closely, you might notice a slight similarity between Irma and the stage/movie hit My Sister Eileen.)

Lewis played Jane Stacy, the level-headed member of the pair, who worked for the wealthy Richard Rhinelander III and had pretty much set her sights on marching Rhinelander down the aisle while an organ played “Oh, Promise Me.” “What good will that do if he’s got two other wives?” Irma Peterson (Wilson) once asked her roomie innocently when Jane brought up the subject of rice-and-old-shoes. Irma was just one in a long line of daffy radio dames (like Gracie Allen and Jane Ace); sure, she drove Jane to distraction at times…but her sweet nature and naïveté usually kept her best bud from introducing her to Mr. Pillow in the wee a.m. hours. Irma wasn’t quite as ambitious in the boyfriend department as her pal; her steady was a loafer named Al (played by John Brown). Although he seemed quite proud of the fact that he depended on the dole for his sole means of support, it was Irma’s fervent ambition to become “Mrs. Al.”

Other regulars on the program included Professor Kropotkin (Hans Conried), the girls’ upstairs neighbor who was constantly kvetching about the state of his living quarters…and landlady Kathleen O’Reilly (Jane Morgan, Gloria Gordon), who was not only the object of Kropotkin’s complaints but the target of many of his sarcastic barbs as well. Because My Friend Irma featured both girls hard at work at their respective jobs, their bosses were also a frequent presence on the series: Irma worked for attorney Milton J. Clyde (Alan Reed), who probably would have sacked her years ago were it not for the fact that he was at the mercy of her unorthodox filing system. As mentioned, Jane’s employer was Richard Rhinelander III (played by Leif Erickson, Donald Woods and Brooks West) and Richard figured heavily in the plots…as did his disapproving mother Helen, played by Myra Marsh.

There were a great many factors involved in the success of My Friend Irma, from its first-rate scripting to superlative performances by its cast of accomplished farceurs…but what really made the series a favorite among radio listeners was its fortuitous scheduling after CBS’ The Lux Radio Theatre on Monday nights. Two years after its debut, the program was the subject of a successful movie adaptation that bears the distinction of being the film that launched the career of comedy duo Dean Martin and Jerry Lewis. A follow-up, My Friend Irma Goes West (1950), was released a year later…and a television version in 1952. In the meantime, Marie Wilson was able to capitalize on her “dumb blonde” fame with starring vehicles like A Girl in Every Port (1952) and Never Wave at a WAC (1953). But Marie’s onscreen antics soon got competition from a singer-actress who staked out a similar claim to lovably ditziness: Marilyn Monroe. Both the radio and TV versions of Irma ended in 1954, and after that Wilson’s film output was limited to small roles in The Story of Mankind (1957) and Mr. Hobbs Takes a Vacation (1962). Wilson didn’t want for work; she did a lot of road theater and summer stock appearances in tailor-made vehicles like Born Yesterday and Gentlemen Prefer Blondes, and guest-starred on such shows as Burke’s Law and Love, American Style. Her last regular television gig before her death in 1972 from cancer at the age of 56 was providing a voice for football wife Penny McCoy on the Hanna-Barbera series Where’s Huddles?—which allowed her to work alongside her one-time Irma boss Alan Reed.