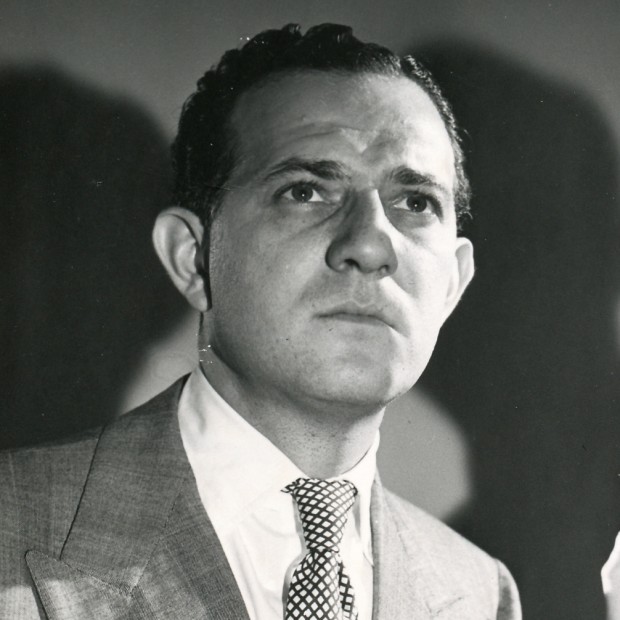 “I’m a product of radio,” actor Mandel Kramer confessed to an interviewer for a 1953 article in the March edition of Radio-TV Mirror. Mandel, who was born in Cleveland ninety-nine years ago on this date, never really amassed the large number of movie or television credits that defined his many of his contemporaries…but, you could argue that he never really wanted that sort of attention. That same Radio-TV Mirror article revealed that once Kramer made the long commute back to his wife and two girls at his suburban Harrison, NY home, “no one would ever suspect Mandel of being an actor.”

Not only was Mandel Kramer “a modest, likable guy”—the actor himself never really had an answer as to why he entered that profession in the first place. Kramer attended both Cleveland Heights High School and Western Reserve University in his formative years. Later, while working in his father’s shoe store for the princely sum of $15 a week, he took classes at the American Academy of Dramatic Arts. Mandel’s studies there led him to a year of performing with the Cleveland Playhouse, and he developed an interest in radio while apprenticing at WTAM in Cleveland.

With $150 squirreled away in his pocket, Kramer followed his thespic ambitions to New York City…and though the Big Apple was certainly capable of treating newcomers cruelly, Mandel caught a break by bluffing his way into a radio audition by telling the receptionist a tiny white lie. It didn’t matter—the producers liked him, and hired him for the gig. Kramer worked steadily on such programs as The Cavalcade of America, The Columbia Workshop, The Molle Mystery Theatre, Murder at Midnight, Philo Vance and Words at War. Mandel was a semi-regular on This is Your FBI in the series’ early New York years (from 1945 to 1947), and could also be heard on such Big Apple-based shows as The Adventures of the Falcon, The Adventures of the Thin Man, The Big Story, Casey, Crime Photographer, Famous Jury Trials and Gang Busters. He was garrulous cab driver Mahatma McGloin on Mr. and Mrs. North, and occasionally played a similar talkative hack on The Shadow: Moe “Shreevy” Shrevnitz.

Mandel Kramer’s most durable radio gig was playing Harry Peters opposite Don McLaughlin’s David Harding on the popular juvenile adventure series Counterspy—he landed the role in 1943, and played the part until the show’s departure in 1957. Kramer also had recurring roles on a slew of daytime dramas; in addition to appearing on Big Sister, The Guiding Light, The Light of the World, Stella Dallas and Young Dr. Malone, Mandel played Tom Bryson (theatrical manager to matinee idol Larry Noble) on Backstage Wife and Lt. Tragg on the radio version of Perry Mason. Kramer also transitioned with the Mason cast when the series went to television—not with the familiar Raymond Burr nighttime version, but instead with The Edge of Night. The actor received an Emmy nomination in 1979 for his work on that program as Police Chief Bill Marceau. (Mandel also appeared briefly on the TV version of Guiding Light before his long-running stint on Edge.)

Mandel’s busiest period as a radio actor could arguably be observed during the mid-1950s; he was the last performer to play Pat Abbott on the mystery comedy The Adventures of the Abbotts, which in turn led to a similar role as the star of It’s a Crime, Mr. Collins. Kramer was also heard on 21st Precinct, The Chase, Exploring Tomorrow, Official Detective, Rocky Fortune and X-Minus One. Perhaps the one radio program for which modern-day audiences remember today’s birthday boy is Yours Truly, Johnny Dollar. When the long-running crime drama left for New York in December of 1960 after its many years in Hollywood, Mandel was the last actor to play “the man with the action-packed expense account.” Kramer also appeared several times on the New York-based incarnation of Suspense, which – along with Yours Truly, Johnny Dollar – rang down the curtain on “The Golden Age of Radio” on September 30, 1962.

Mandel Kramer was a radio veteran who insisted on remaining true to the medium that brought him fame: he was a member-in-good-standing of the informal stock company that frequented the 1970s radio revival attempt known as The CBS Radio Mystery Theatre. Kramer passed away at the age of 72 in 1989.